A panoramic view of the rice terraces in Brgy. Viewpoint, Banaue, town of Ifugao. Photos by EV ESPIRITU/INQUIRER NORTHERN LUZON

LA TRINIDAD, Benguet—A leading restaurant chain has committed to buy rice grown in the mountain terraces of the Cordillera, as part of its effort to help preserve these engineering wonders.

Tinawon is the traditional rice variety grown in Ifugao. It means “one-a-year” because this grain can be harvested only once a year.

According to Dalipog, 1,607 hectares of rice terraces are cultivated in Banaue with an average yield of 3.9 tons a hectare.

“But the present yield is not enough to sustain Banaue folk for the whole year,” he said, so families augment their supply by buying other rice varieties.

Despite the small supply, farmers have been exporting 7 tons of tinawon to the United States annually, he said.

Tinawon is sold at P120 a kilo, much more expensive than the National Food Authority regular milled rice that sells for about P28 a kilo.

Dalipog said the Max’s deal would require the rehabilitation and development of 332 ha of abandoned rice terraces in Banaue.

These farms have been left idle because many of the younger Ifugao have left the province—even the country—for higher-paying jobs or to build new careers.

“We hope that this new demand for tinawon would encourage more folks to come back and tend the terraces,” Dalipog said.

In their initial talks, Dalipog said MGI Director Carolyn Salud had asked the municipal government to supply the company with a cost estimate for reviving the idle terraces.

Dalipog said he had asked MGI to subsidize the rehabilitation of the abandoned terraces and provide capital for farmers to tend the fields, in exchange for a 50 percent share of the total yield.

“They did not reject our proposal, but they wanted to see the estimates before finalizing the deal,” he said.

MGI, he said, would require 70 tons of tinawon each month.

“I do not think Banaue can meet this demand alone, even after the abandoned terraces are rehabilitated. I think it would take the whole province of Ifugao to meet this demand,” Dalipog said.

Salud was in La Trinidad town on Feb. 25 to join a company-initiated forum on agro-tourism.

She said MGI had developed new rice dishes highlighting the tinawon, in the hope of creating high demand and encouraging farmers to revive the terraces. 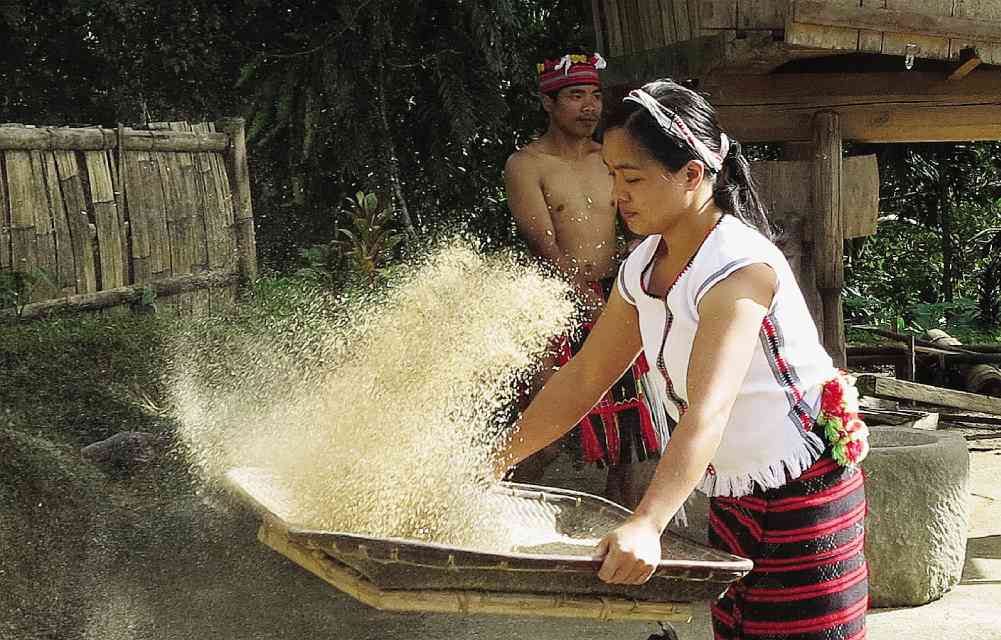 These are the tinawon tinola, tinawon adobo and fried tinawon with danggit and red eggs.

These dishes will be served exclusively in eight selected Max’s Restaurants in Baguio, Tarlac, Nueva Ecija, Pangasinan and La Union.

He said it took his team about a month to perfect the rice dishes.

“When we were conceptualizing the dishes, we asked families, friends and even other chefs what they preferred to eat with ‘sinangag,’ dishes that are close to the heart and are uniquely Filipino,” he said.

From the discussions came the three dishes, which MGI hopes will just be the first of many that will honor the rice from the awe-inspiring terraces of Ifugao.