SM strips itself of center of commerce tag 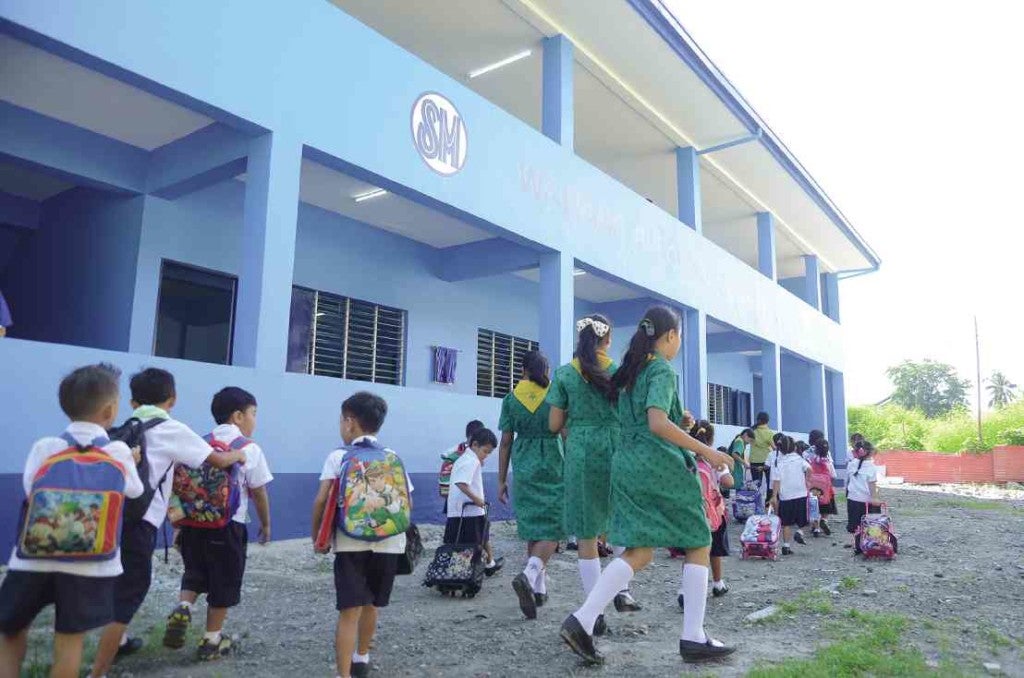 SM Foundation’s involvement in communities has earned the respect of customers.

Teaching a man how to fish so that he can feed himself wasn’t enough for taipan Henry Sy.

The founder and chair of the SM Group of Companies makes sure the man’s catch and newly acquired skills will benefit not just himself but the entire community.

“Our goal is to help people so they can eventually help others, thus creating a snowball effect,” says Sy’s daughter Debbie, the executive director of SM Foundation.

The foundation began by giving out scholarships here and there, restricted by the corners of the box-shaped SM malls. Debbie says the foundation eventually consolidated its operations and “expanded to become communities-based.”

The success stories of SM Foundation’s programs for education, community development and health are proofs of Sy’s vision.

Justin Torres’ mother repacked peanuts and peddled them in sari-sari stores. A gifted youth, Justin got a scholarship at the National University, owned by the Sys.  The school gave her incentives whenever she landed on the dean’s list.

The grants she received from the foundation allowed her to support her younger sister.  The extra cash also sustained her father, a tricycle driver, when he couldn’t work due to cramps.

Justin now works in a bank while her sister has just graduated from college. She is also now assisting her brother’s education.

The son of a farmer, Eduardo Aucena underwent SM Foundation’s Farmer’s Training Program in Urdaneta, Pangasinan in 2012. There, farmers learn modern  and economical farming techniques and become suppliers of SM groceries and stores.

The Aucenas’ rented farmland, which they hope to acquire next year, today produces high-value crops such as red papaya, rice and corn.  The additional earnings have allowed Aucena to hire out-of-school youths and share his knowledge with other farmers.

Even before the onslaught of Supertyphoon Yolanda, SM Foundation was already poised to renovate the derelict 50-bed Tacloban City General Hospital. After the tragedy, the foundation bought necessary equipment and rebuilt the hospital into becoming the tertiary facility it is today.

SM Foundation’s work isn’t a public relations exercise that produces a fancy report filled with numbers and data. Sy had always wanted to address poverty, a major social issue in the country, through programs that would teach individuals to become self-reliant.

In areas where SM companies have presence, there are many who need work, education, healthcare and food. Sy realized they must eventually be taught not to rely on dole-outs.

Recognizing the wide scope of the foundation’s initiatives, President Benigno Aquino III recently made SM Foundation the Outstanding Exemplar in the Private Sector.

“We don’t set financial targets. Our job is to make sure the budget goes to the right people and the right projects,” says Debbie.

The Sys always believed education was the remedy to poverty. The foundation has already organized 32,000 programs that was able to help 2,160 graduates in the past 20 years. It is currently supporting 1,383 scholars via 84 partner schools.

“You can see the transformation from poverty to being equipped to fend for themselves and their families,” says Carmen Atayde, the foundation’s vice president for education.

To keep its communities in good shape, the foundation has built 114 health centers across the nation all named after the taipan’s wife, Felicidad Sy. Plans are underway to build 12 more in 2016. These centers house facilities for children, a social venue for seniors, birthing facilities and breast feeding areas for mothers.

“We do more than what others are doing,” says Connie Angeles, vice president for the foundation’s health and medical program.

Having a soft spot for the military, Henry Sy has also been supportive of the renovation of health facilities of the Armed Forces of the Philippines.

The foundation also helped transform the unused Philippine National Police training center into a dispensary, dedicated to the Special Action Forces who died in the Mamapasano incident early last year. At the V. Luna War Veteran’s Hospital, the foundation refurbished the Heroes’ Ward for the battle-scarred and those with disabilities.

Henry Sy also foresaw that the increasing population in the Philippines and the free trade in the Asean region would require a higher demand for food supplies. Inspired by the work of Harbest Agribusiness Corporation, Sy requested the company to replicate its unique farmers’ training program for SM Foundation.

The multiplier effect has been tremendous. Since 2007, the program has produced 12,750 farmer-graduates from 2,123 barangays  nationwide.  With their produce, the farmers learn to repackage and become suppliers or sellers in markets.

SM Foundation’s involvement in communities has earned the respect and loyalty of customers.

“The people don’t see SM as a center for commerce. They know that SM Foundation is there for support. The social services are nationwide. We are present when there is a calamity. This is how the foundation is helping the SM brand,” says Atayde.