Iligan and CDO, the regional center, are the largest cities. The region has close trade links with Cebu. Several roll-on-roll-off vessels operate directly to or via Bohol.

The region covers a land area of 2.05 million hectares (ha). More than 60 percent of Northern Mindanao’s total land area is classified as forest land. The population was 4.30 million in 2010.

Region X is the industrial heartland of Mindanao. The number of industrial plants  surpasses that of other regions on the island.

Dole, Del Monte Fresh/Agrinanas and MKADC are into bananas. Total lands devoted to pineapples reached about 33,000 ha and 15,000 ha for Cavendish banana. DMPI has been operating in the region for 89 years.

BUSCO operates a  refinery.  A. Brown Resources is into palm oil, San Miguel into cassava, and Bukidnon Highland Produce is venturing into the production of asparagus.

Phil-Agro Industrial Corp. is into starch production while Japan (Phils.) Latex is into rubber latex production.

While the region is home to large agribusinesses and industrial plants, poverty in the region remains high and persistent.  Between 2006 and 2012, poverty incidence hardly improved. The number of poor rose to 1.76 million from 1.55 million or an increase of 14 percent.

If Misamis Oriental (which includes urban CDO) is excluded, the poverty incidence rose to 47.9 percent from 42.5 percent, raising the number of poor by 24 percent.

Idle lands at 20,370 ha, or 2.8 percent of farm land, are the largest in the country (www.psa.gov.ph). The idle lands and so-called “forest lands” need development.

There is also tremendous potential for aquaculture in Panguil Bay, which is being developed as the region’s mudcrab capital. There are at least 2,000 ha of under-utilized ponds suitable for bangus-tiger prawn and  bangus-vannamei polyculture.

A region of contrast

Today, the region is a study in contrast: world-class banana and pineapple farms, but relatively lower yields in other crops, especially for smallholders.  Yield affects the cost of raw materials supply and the scale of agri-food manufacturing plants and, in turn, non-farm jobs.   The outcome is high poverty.

This must be complemented by peaceful dialogue among parties as external (non-Mindanao-based) investors are wary of security concerns.

Finally, it is equally important to balance development across provinces to promote inclusive growth.

(The article reflects the personal opinion of the author and does not reflect the official stand of the Management Association of the Philippines or MAP.  The author is vice chair of the MAP AgriBusiness and Countryside Development Committee, and executive director of the Center for Food and AgriBusiness of the University of Asia & the Pacific. Feedback at <[email protected]> and <[email protected]>.  For previous articles, please visit <map.org.ph>) 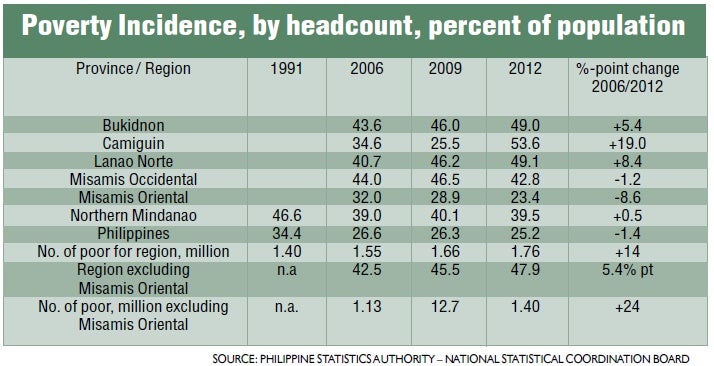