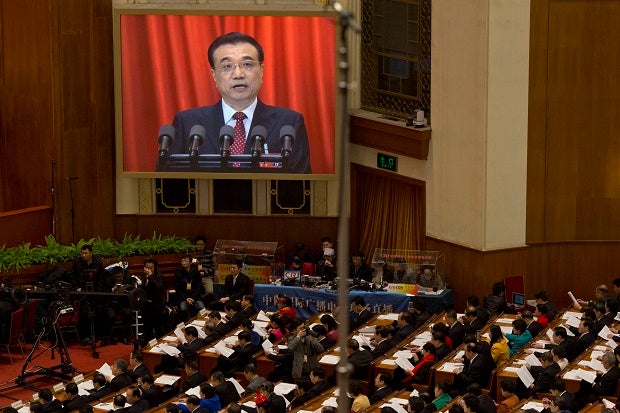 Chinese Premier Li Keqiang appears on a big screen as he delivers the work report at the opening session of the annual National People’s Congress in Beijing’s Great Hall of the People, Saturday, March 5, 2016. AP

BEIJING, China — China’s leadership tried to quell anxiety about its slowing economy following financial turmoil and rising labor unrest as it cut its growth target Saturday and promised to open the oil and telecom industries to private competitors in sweeping industrial reforms.

Premier Li Keqiang announced a growth target of 6.5 to 7 percent in a report to the national legislature on Beijing’s plans for the year. That was down from last year’s “about 7 percent” and reflects the ruling Communist Party’s marathon efforts to replace a worn-out model based on trade and investment with more self-sustaining growth driven by consumer spending.

“China has laid a solid material foundation and its economy is hugely resilient,” the premier said in an address to nearly 3,000 delegates to the National People’s Congress, a 12-day affair that kicked off Saturday. “As long as we work together as one to surmount all difficulties, we will definitely achieve the targets for economic and social development in 2016.”

In a wide-ranging speech lasting nearly two hours, Li said Beijing will “oppose separatist activities” in Taiwan, the self-ruled island China claims as part of its territory. He announced no new initiatives following the recent election of Taiwanese President Tsai Ying-wen, who takes office in May.

A separate budget report released Saturday confirmed that military spending will rise 7.6 percent, which comes at a time of tensions with China’s neighbors over disputed portions of the South China Sea. The military budget of 954 billion yuan ($146.5 billion) keeps China in second place in global defense spending behind the United States.

The premier promised more measures to clean up China’s badly polluted air, water and soil, and more spending on science and industrial research and development to create technology and better-paying jobs.

Chinese leaders are struggling to reassure the public and global markets about their ability to steer the world’s second-largest economy following a plunge in stock prices and currency turmoil. Spreading protests by laid-off workers have fueled questions about whether Beijing can manage its ambitious economic transition.

The latest growth target is the minimum Chinese leaders say is required to achieve the official goal of doubling average incomes from 2010 levels by 2020. Economists warn anything higher could set back reforms by forcing Beijing to prop up growth with more wasteful investment.

Last year’s economic growth declined to a 25-year low of 6.9 percent. Private sector forecasts suggest even achieving Li’s lower target will be a challenge. The International Monetary Fund expects this year’s growth to drift down to 6.3 percent.

The party’s reform plans require it to cut the dominance of state companies that dominate industries from banking and telecommunications to oil and steel, and give entrepreneurs a bigger role.

Li promised to open electric power, telecommunications, transportation, oil, natural gas and municipal utilities to private competition, though he failed to say whether foreign companies might be allowed in. He said private companies would receive the same treatment as state-owned enterprises in project approval, finance and tax policy.

“We must deepen reform across the board,” the premier said. He said the market “must play a decisive role.”

“If the 6.5 to 7 percent growth should be solid and real, I think it’s very acceptable,” said Liu Gexin, a delegate from Sichuan province in the southwest.

Others were more breathlessly enthusiastic.

“It’s an exhilarating report. It’s a mobilization order,” said delegate Zhu Liangyu from Beijing. “I completely agree with it.”

Li promised to open service and manufacturing industries wider to foreign investors, but gave no details. He promised that regulations would be made “more fair, transparent and predictable” to attract investment. Business groups have complained that Chinese regulators are hampering access to promising sectors in violation of free-trading pledges.

Much of China’s slowdown has been self-imposed as regulators clamped down on a building boom and nurtured retailing, tourism and other service industries. An unexpectedly sharp downturn over the past two years has raised the risk of politically dangerous job losses and prompted Beijing to shore up growth with mini-stimulus efforts.

Despite repeated official denials, widespread expectations that Beijing will weaken its yuan to boost exports that forecasters say shrank by as much as 20 percent in February has driven an outflow of capital that spiked to a record $135 billion in December.

This past week, Moody’s Investors Service cut its outlook on China’s government credit rating from stable to negative, citing rising debt, capital outflows and “uncertainty about the authorities’ capacity to implement reforms.”

In comments Friday reported by the government’s Xinhua News Agency, a Chinese deputy finance minister retorted that Moody’s was wrong and shortsighted.

Communist leaders have tried to shift public attention away from the growth target. They say their priority is jobs and so long as the economy generates enough, they will accept slower growth.

The downturn and Beijing’s reforms have wiped out jobs in mining, steelmaking and other industries.

Retailing, e-commerce and other service industries are growing and absorbing some idled workers, but others are struggling to find work. The government says the economy created 13 million new jobs last year, but has not said how many were lost.

The premier pledged to boost consumption in areas such as elder care and health services and to link traditional businesses to the Internet. China has the world’s biggest population of Internet users, and investors are pouring billions of dollars into developing online and smartphone-based ventures for food delivery, movie ticketing, travel and other services.

The government hopes such services can help propel consumption that grew to 44.5 percent of the economy last year from 2014’s 36.8 percent.

Li said the government hopes to generate at least 10 million new jobs this year as part of plans to create 50 million in the five years through 2020.

The premier pledged to accelerate “supply-side reform,” or the painful process of shrinking bloated industries from steel to cement and aluminum. That glut has led to price-cutting wars that are driving companies into bankruptcy. Steel producers have responded by exporting their surplus, prompting complaints by China’s trading partners.

Li said Beijing will promote mergers and shut down “zombie enterprises” — companies that are kept afloat by cheap loans from state banks.

The premier said targets will include the coal and steel industries, for which plans already were announced in February, but didn’t give details of other sectors that will be affected.