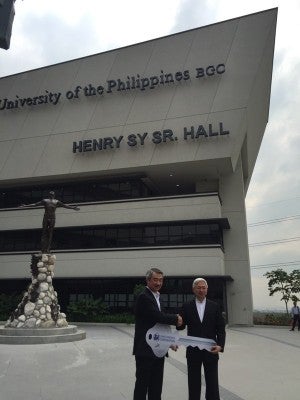 THE COUNTRY’S premier state university has a sleek new campus at the heart of the bustling central business district – University of the Philippines Bonifacio Global City – built at a cost of around P400 million and donated by the SM conglomerate led by tycoon Henry Sy Sr.

The nine-level UP BGC campus building, which is ready to start offering postgraduate courses in the coming school year, is the UP system’s 17th campus in the country. This is also the first donation by the country’s largest conglomerate SM Investments Corp. (SMIC) to the UP system, even if none of the SM patriarch’s children or grandchildren had studied in this university.

“It is with great pride that we turn over today the Henry Sy Sr. Hall to the highly esteemed University of the Philippines here at BGC. The building carries no less than my father’s name whose prime advocacy is education. He worked hard and sacrificed so much early in his life just to be able to receive formal education. He wants the same for every Filipino,” said SM Prime Holdings president Hans Sy when he turned over the facility to the UP Professional Schools on Tuesday.

UP president Alfredo Pascual received the new campus building – which was built on a land donated by the state-owned Bases Conversion Development Authority – on behalf of the UP system.

The new satellite campus spans a total area of 12,000 square meters and will house 29 classrooms, three laboratories, a study area called learning commons, faculty lounges, an auditorium, a moot court or a venue for simulated court proceedings for law students, a multi-purpose hall, discussion rooms, office spaces and an executive lounge. It also comes with a multi-level basement parking area.

The campus is located at BGC’s 32nd street and close to the C-5 highway. It is right next to the International School.

Postgraduate classes will be held at the new campus. The UP College of Law will offer an evening Juris Doctor program. The Cesar E. Virata School of Business will offer MBA and DBA classes starting 2017.

Other UP Diliman units that will offer postgraduate studies at UP BGC include: College of of Engineering; School of Statistics; School of Urban and Regional Planning; School of Labor and Industrial Relations; and College of Architecture.