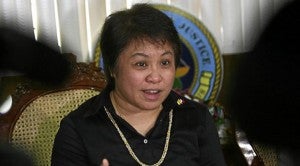 The additional allowances to be received by military and uniformed personnel under the recent order issued by President Benigno Aquino III that jacked up the compensation of government employees are not tax-exempt, according to Bureau of Internal Revenue (BIR).

Revenue Memorandum Circular No. 19-2016 issued by Internal Revenue Commissioner Kim Henares last Feb. 19 clarified the tax treatment for the monthly provisional and officers’ allowances. Under EO 201, a monthly provisional allowance will be given to military and uniformed personnel in four tranches in lieu of increases in base pay.

“The provisional allowance shall be given as an interim measure to supplement the total compensation of military and uniformed personnel until such time that their base pay schedule is rationalized in consideration of the pension implications of base pay adjustment of personnel in the active service under existing laws,” the EO read.

Also, “an officers’ allowance shall be given to the [certain] military and uniformed personnel ranks, likewise as an interim measure until such time that the base pay schedule is modified and rationalised,” according to the EO.

The BIR said these additional allowances would be subject to income tax.

“A reading of Section 3 of Republic Act (RA) No. 9040 would readily show that the monthly provisional allowance and monthly officers’ allowance given to military personnel/officers pursuant to the said EO are not among those enumerated as exempt from income tax under the law,” the BIR said.

Enacted into law in 2001, RA 9040 lists down the tax-exempt allowances as well as benefits being enjoyed by the personnel of the Armed Forces of the Philippines (AFP).

Your subscription could not be saved. Please try again.
Your subscription has been successful.
Read Next
Where and how do we do business in the Asean market?
EDITORS' PICK
CBCP releases litany of thanks for better health
Omega Speedmaster super racing: Tiny device massive change
House energy committee chair Arroyo bats for cheap electricity
US gets access to more PH bases
12-year data track poor training of PH teachers
Smart launches first joint Telco TVC for Donbelle
MOST READ
Sandara Park ‘got in trouble’ for not pressing elevator button for a company head
CIDG raids Pogo firm in Tarlac; rounds up 850 foreign, Filipino employees
NorthPort, Bolick reach temporary solution to impasse
BIZ BUZZ: Tali troubles, part 2
Don't miss out on the latest news and information.