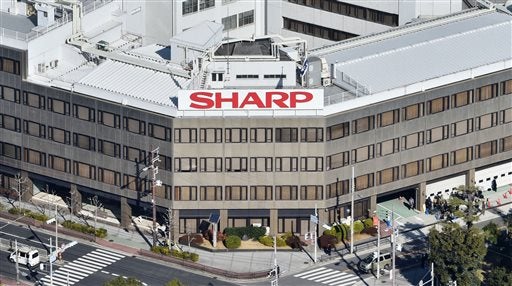 Sharp Corp. would not confirm the reports by Kyodo News Service and other media that it had opted for Foxconn rather than a competing consortium of Japanese investors to help restructure its once booming liquid-crystal display panel business to cope with competition from Korean and Chinese rivals. The company said nothing had been announced.

Foxconn did not immediately respond to queries requesting comment.

Kyodo, which cited unidentified sources close to the matter, as did the other reports, put the value of the deal at 660 billion yen ($5.9 billion).

The news sent Sharp share prices initially higher on the Tokyo Stock Exchange, but the issue finished 14 percent lower after the companies did not announce a deal.

If carried out, the move would mark the first takeover of a major Japanese electronics manufacturer by a foreign company. Despite this nation’s rapid globalization, some in Japan Inc. have expressed fears such a move would result in the nation losing technology to foreign interests.

Osaka-based Sharp has long been a prized brand here, beginning with the mechanical pencil, still known as the “sharp pencil” in Japan. It also pioneered hand-held electronic devices.

Sharp had its beginnings as a Tokyo-based metalworking shop in 1912. It later made its fame with Aquos flat-panel TVs and nifty Net-connecting cellphones, long before the arrival of iPhones in Japan.

But its finances deteriorated over the last several years as panel prices dropped, and it could not beat price competition from Asian rivals.

Analysts say that even with a takeover Sharp’s future remains uncertain because of challenges in restructuring its consumer electronics operations.

Earlier this month, Sharp narrowed the choice of a new major shareholder to Hon Hai Precision Industry Co. or Innovation Network Corp. of Japan which groups Japanese finance companies and is backed by the government.

Hon Hai is a major contractor to Apple Inc., assembling products such as iPhones. TVJ