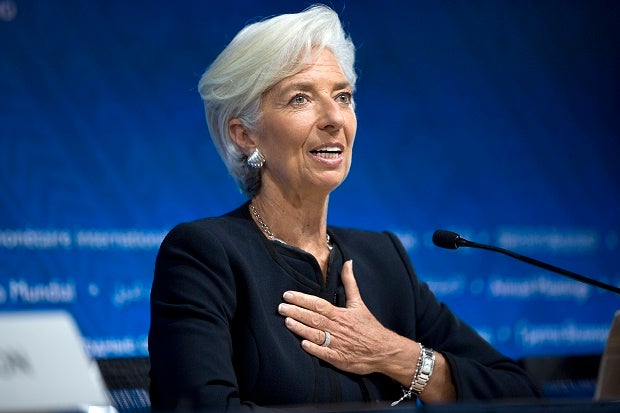 WASHINGTON, United States—France’s Christine Lagarde, who battled financial fires across Europe as managing director of the International Monetary Fund, was officially named Friday to a new term at the global emergency lender.

But with the world economy slowing, and a number of emerging economies plunging into crisis, Lagarde’s second five years are not likely to be any quieter than her first term.

READ: Lagarde: ‘reason to be concerned’ about global economy

Greece and Ukraine, two of the Fund’s largest liabilities, remain on the precipice, and new challenges are cropping up as a consequence of China’s slowdown and the global commodities collapse, war in the Middle East, and fears of return to recession in developed countries.

The former French finance minister, 60, was unopposed for the position, and approved “by consensus” by the IMF executive board.

It keeps her in charge of the institution’s staff of 2,600 and more than $1 trillion in resources to be used to support struggling countries and, when needed, rescue them and shepherd them through often difficult reforms.

That process is politically fraught and, as in the case of Greece, which is still struggling to get on its feet six years after its first financial rescue program, the focus of huge policy debates among the world’s top politicians, bankers and economists.

“In taking this decision, the board praised Ms Lagarde’s strong and wise leadership during her first term,” said Aleksei Mozhin, the dean of the board.

“During turbulent times in the global economy, Ms Lagarde strengthened the Fund’s ability to support its members with policy advice, capacity building and financing.”

Lagarde arrived at the IMF in 2011 tasked with restoring the reputation of its leadership following her predecessor Dominique Strauss-Kahn, who resigned under the cloud of a sex scandal early that year.

She built respect through tough, huge rescues of Greece, Ireland and Portugal in the European economic crisis.

And she managed to advance crucial reforms which elevated the status of the new emerging economic powers like China at the IMF after decades of domination by Europe, the United States and Japan.

Lagarde has “played a critical role in revitalizing the Fund’s relations with its global membership, including its emerging market and developing members,” noted Mozhin.

Lagarde said she was “delighted” to accept a second term to lead the IMF, which represents 188 member countries.

But she quickly turned her focus to the challenges ahead, saying the institution, while planning further in the future, has to remain focused in the short term on financial stability.

“Are we in a 2009 moment?” she asked Friday, referring to the deep financial crisis that year.

“I don’t think so. Are we in a moment where coordination is needed? Yes.”

One key lesson of the past five years, she said, is the disruptive “spillover” effects that monetary policies in one country can have on another.

And she said the IMF needs to take a more preventative role in advising countries.

“I think we can play a bigger role in terms of trying to anticipate” what is needed.