PH could be next global investment, IT hub | Inquirer Business
Close
menu
search

PH could be next global investment, IT hub 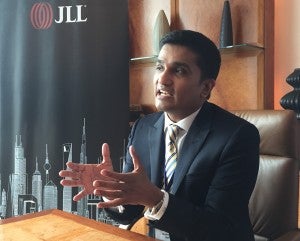 The Philippines has the potential to become a global investment destination and the next big information technology hub by liberalizing foreign restrictions on property ownership, said an executive from the Indian unit of international property consulting firm Jones Lang LaSalle (JLL).

The Philippines, for its part, is a global leader in the call center segment, but has also started to shift to other higher valued services.  The BPO industry is projected to breach $25 billion this 2016.

He said BPO locators were looking for office space outside Manila, which was priced at around $10 per square meter. To attract these locators, the government must build a high-speed railway or highway to create these new hubs 30 to 40 minutes away from the metropolis.

The JLL executive said the government should also exert effort to bring in a few big names, like Google, even it means subsidizing their real estate requirements. These big names could open the door to other investors, similar to how key markets compete to attract the big automobile manufacturers.

Asked how important it is to do away with foreign restrictions on real estate ownership, Nair said this was very important especially for emerging markets like India and the Philippines where governments do not have enough money to invest in infrastructure. The option would be to promote the public-private partnership (PPP) model in infrastructure and real estate, he said.

Last year alone, he said India lured $5 billion to this segment, which was still small compared to the global market of $750 billion.  He said New York City alone was getting around $40 billion annually.

“So the government needs to open up these sectors and given that China is slowing down, many of these global funds will be looking at other places. Philippines is one of those places ranked high on the ease of doing business,” he said.

There have been moves to amend the Philippine Constitution via legislation. Charter change supporters said there was a need to open up the country’s mass media and advertising, land ownership, educational institutions, utilities and natural resources in order to attract foreign money.

Nair said India started offering to foreign businessmen a minimum investment size of 50,000 square meters, which was lowered to 20,000 sqm and then eventually eliminated. He said the liberalization efforts were gradual.

“In the overall Asia outsourcing marketplace, I would say Philippines is the second market that comes to mind given your supremacy in the contact industry, English-speaking graduates and cultural affinity to the Americas,” he said.