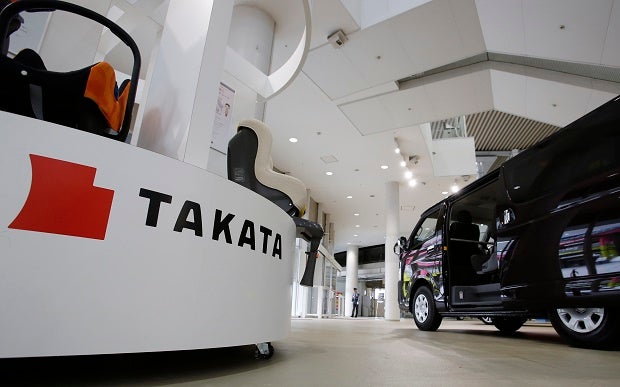 In this Nov. 6, 2014, file photo, child seats manufactured by Takata Corp. are displayed at a Toyota Motor Corp.’s showroom in Tokyo. On Tuesday, Feb. 2, 2016, an outside panel hired by embattled air bag maker Takata Corp. said the company lacks processes to improve product quality including air bag inflators that have been blamed for at least 11 deaths and 139 injuries. AP File Photo

The panel, commissioned by the Japanese company and led by Samuel Skinner, a former US secretary of transportation, said the company needed to strengthen its quality culture after its airbags caused at least 10 deaths worldwide from sudden explosions.

Safety regulators in the United States have discovered that the inflators attached to the airbags can rupture, sending shrapnel into occupants of cars. Some of the focus of investigations is on the stability of the chemical propellant in the inflators.

The Skinner panel was not charged with finding what went wrong to create the faulty airbag problem, but instead to see how the company, which is accused of covering up the problem for years, should reform going ahead.

It found that Takata’s program for monitoring the quality of its airbags, installed in tens of millions of cars worldwide, was poorly designed and structured, and relied too much on the automakers’ oversight.

READ: Takata plunges as Honda dumps it as airbag supplier after record fine

“There is no stand-alone Takata program aimed at identifying quality-related problems with Takata products once they are in the vehicle fleet. And there are limited formal systems for consolidating and analyzing what information Takata does collect,” the report said.

The panel also pointed to one potential immediate problem with the airbags: The inflator propellant is often loaded by hand, not machine.

“Some of the safety-critical aspects of Takata’s operations are done manually,” it said.

“In particular, Takata should move toward full automation of propellant loading and look for opportunities to increase machine assistance in airbag folding,” the panel said.

The panel pointed to other key weaknesses in Takata’s corporate organization: It can move product designs to production even with outstanding questions unresolved and it has no clear “ownership” of a product, that is, an individual or team charged to watch how it performs after it is developed.

“No one person or team is currently specifically tasked with monitoring a product once it is in the fleet.”

Skinner said that overall Takata’s corporate organization and processes are fairly strong, but could become more rigorous if the panel’s views are implemented.

“We expect Takata to implement our recommendation,” he said.

“It’s clear that they need to take some steps and it appears that they are committed to do so.”

Takata continues to face various probes internationally into the airbag problem even as it struggles to help replace those already installed in millions of cars by most of the world’s largest automakers.