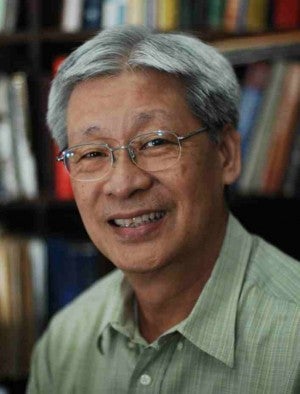 HE ONCE said in jest that he became an economist because he had come from a large family that needed to make the most out of scarce resources. And apart from helping shape economic and monetary policy in the country, he mentored the next generations of aspiring economists at the University of the Philippines.

Cayetano “Dondon” Paderanga Jr., a prominent technocrat, economic reform advocate and well-loved professor,
passed away at around 11:45 pm on Friday at the age of 67. He succumbed to “sepsis,” or a severe infection in the bloodstream, following complications from an open-heart surgery meant to repair aneurysm on his aorta and an emergency double heart bypass, close associates said.

“As the saying goes, the good – they die young. Dondon is a very good economist, technocrat, public servant and teacher. And a very loyal friend. To him, what mattered most was that government made the right policy choices, not who got the credit,” said fellow economist and UP professor Felipe Medalla, a member of the Monetary Board and a former Economic Planning Secretary.

“We mourn the loss of a good man before his time. An ideal husband to Delia and caring father to their two sons. A gem of a public servant – intelligent, competent, humble, honest. A great teacher to his friends in UP and to his colleagues. A wonderful friend,” said economist Romeo Bernardo, former Finance Undersecretary and co-founder of the Foundation for Economic Freedom (FEF), said in a Facebook tribute on Saturday.

Paderanga was founding chair of FEF, a public advocacy organization which seeks to advance the cause of economic and political liberty, good governance, secure and well-defined property rights, market oriented reforms and consumer protection.

“In or out of government, he fought for economic reforms,” Calixto Chikiamco, the current president of FEF, said in a text message.

“The Foundation for Economic Freedom is saddened by the passing of its founding Chairman Dondon Paderanga. Dondon was a brilliant,quiet and decent man who let his many achievements speak for themselves-the epitomy of the servant leader of whom there are too few. FEF and the nation will surely miss him,” former Finance Secretary Roberto de Ocampo, who now chairs FEF, said in a text message.

Margarita Debuque-Gonzales, a former Inquirer business journalist and now a Professor at the UP School of Economics, fondly remembers Paderanga – who was at different points in her life, a news source, a boss, a mentor and even a principal sponsor at her wedding.

“As a source, he was very enigmatic, and I remember that I always left the interview thinking I had something to write about, but then going home realizing that I had absolutely nothing to put down. He was always delighted–and obviously so–when I would tell him how he could be the Philippine’s version of Alan Greenspan (the US Federal Reserve chief in the 1987 to 2006), as his statements were, in my experience at least, almost always perfectly hedged,” Debuque-Gonzales said in an email.

“As a boss, Dr. Paderanga could swing from one extreme to another, from talking about current economic events and longer-term structural issues to dissecting personal problems and giving fatherly advice. Even when I had grown my own wings, and gone on the same path that he trod to become faculty at UP, he still loved to play the role of the mentor, constantly quizzing me about my research and consultancy plans whenever we bumped into each other in the corridors, which was quite often. But this was after first asking about the health of my four- and five-year old sons and husband, of course,” she said.

Debuque-Gonzales attested to how highly esteemed Paderanga was in UP, the premier state university and a breeding ground for many of the country’s intellectual elite.

“It was also at the university that I discovered, though I was not the least bit surprised when I did, how loved he was by his students and how much he loved them in return,” she said.

“So, if I were to summarize what he was to people around him, and if there is anything I would miss about him, it would surely be this—his constant presence, his sincere advice, and his kind heart,” she said.

“Dondon’s stint with the PSE was short lived but he could be credited with one key reform measure, which was converting the exchange from a purely broker-owned entity into a more widely-owned listed company as mandated by the Securities Regulation Code. While the PSE is still not fully compliant with the law, Dondon can truly say that he started it all,” said Francis Lim, former PSE president.

The economist would have turned 68 on October 9.

He is survived by wife Delia and two sons Marco Noel and Paolo Paderanga.

Read Next
US economy loses momentum in fourth quarter of 2015
EDITORS' PICK
Legarda: Ending Violence Against Women, a cause for all
This new condo in the South will make you want to turn a new leaf
CHR hopes inequalities exposed by COVID-19 pandemic are addressed
Smart offers wireless fiber-like speeds to Filipino homes with country’s first 5G Prepaid Home WiFi
BOQ monitoring 64 travelers from ‘red-list’ countries amid Omicron
DOH: Booster doses for fully vaxxed adults to start December 3
MOST READ
DOH: Booster doses for fully vaxxed adults to start December 3
Ex-DOT chief Ace Durano convicted of graft over 2009 project
Roque defends Bongbong Marcos: ‘He was only 15 years old in 1972’
Doctor shot dead in Cagayan de Oro
Don't miss out on the latest news and information.