Oil tumbles 3% after unexpected US rise in stockpiles 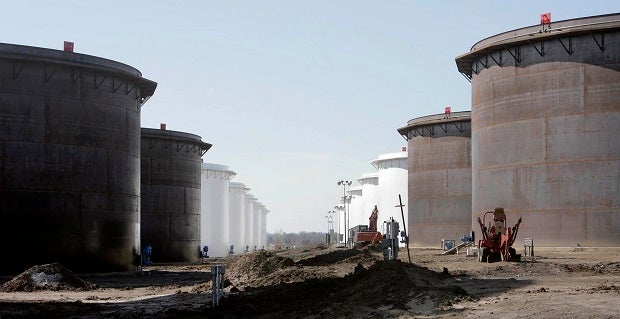 US benchmark West Texas Intermediate (WTI) for February delivery tumbled $1.27, or 3.4 percent, to $36.60 a barrel on the New York Mercantile Exchange, erasing the prior day’s brief rebound.

The US Department of Energy’s weekly report showed Wednesday that the nation’s commercial crude stockpiles had resumed their upward trend following a one-week decline.

Stockpiles rose by 2.6 million barrels to 487.4 million barrels in the week ending December 25, instead of the 2.5-million-barrel fall expected by analysts surveyed by Bloomberg News.

Inventories remained near record levels and were up 26.5 percent from a year ago.

Stockpiles of gasoline and distillates such as heating fuel and diesel rose more than expected. And a build of supplies at the Cushing, Oklahoma hub, the delivery point for Nymex WTI futures, also dented market sentiment.

The data, combined with slightly rising US crude production, “is yet another reminder that the supply glut could take a long time to clear which may mean even lower oil prices in the near term,” said Fawad Razaqzada at Forex.com.

Prices have fallen by almost 70 percent since 2014 amid the persistent global oversupply.

Razaqzada forecast a rebound in the late 2016.

“The second half of the year could see WTI rise as some of the weaker oil producers in the US are forced out of the market amid the persistently weaker prices,” he said.

“When and at what price level will oil bottom out is a million-dollar question, but for now at least there’s still no end in sight for this protracted bear trend in crude.”