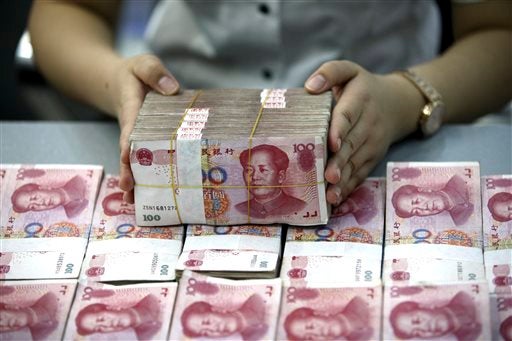 Despite a territorial dispute with China in the West Philippine Sea, the Philippines announced on Wednesday that it would become a founding member of the Beijing-led Asian Infrastructure Investment Bank (AIIB) that aims to finance developing countries’ infrastructure needs.

The United States and Japan, the closest allies of the Philippines, are snubbing AIIB, viewed by some as a rival to the World Bank and the Asian Development Bank (ADB).

The Department of Finance (DOF) said Philippine Ambassador to China Erlinda F. Basilio will sign AIIB’s articles of agreement on behalf of the Philippine government at China’s Ministry of Foreign Affairs on Thursday—the last day for prospective members to do so.

Hence, the Philippines will be the last among AIIB’s 57 prospective founding members to sign the articles of agreement, which already came into force on Dec. 25. (See list of members on this page.)

The Beijing-headquartered lender is expected to start operations early next year with an opening ceremony scheduled for Jan. 16-18.

Even as the majority of the AIIB’s founding members already signed the articles of agreement as early as June, President Benigno Aquino III granted Finance Secretary Cesar V. Purisima, or in his absence Ambassador Basilio, full powers to do the same only on Tuesday.

Communications Secretary Herminio Coloma Jr. on Wednesday confirmed that Mr. Aquino had “approved the recommendation of the DOF that the Philippines join the AIIB.”

The move by the Philippines, a key US ally in Asia, comes after it took Beijing to a United Nations tribunal in a bid to challenge its extensive claims in the South China Sea, or what Manila calls the West Philippine Sea.

“The decision of the Philippines to be one of the founding members of the China-led AIIB is based on the country’s economic development imperatives,” Coloma told AFP.

“There is no linkage between this decision and the issues raised by the Philippines with regard to maritime entitlement claims” in the South China Sea, Coloma added.

Asked whether the South China Sea dispute would affect the Philippines’ AIIB membership, Chinese foreign ministry spokesperson Lu Kang told a regular briefing: “I think the operation of AIIB will be decided by AIIB rules, which are made by all the members.”

The Albert del Rosario Institute (Adri), an international and strategic research group focusing on the Philippines and East Asia, said the country’s decision to join AIIB was a positive development that would have an impact beyond the Aquino administration.

“Signing up with AIIB will be a good move for the country that will expand opportunities for much-needed investments that will accelerate the growth of job-generating enterprises for as long as the engagement complies with Philippine and international laws,’’ said Adri president Dindo Manhit.

“This also shows that though there are ongoing issues in the West Philippine Sea, we are consistent in recognizing international laws as an enabling framework for peaceful arbitration of territorial conflicts and encouraging a productive economic environment,’’ Manhit added.

For about half a year, the Philippines deferred from signing the articles of agreement.

Last Monday, the Office of the President was still getting more information from the DOF on the country’s participation in other multilateral lenders, such as the Manila-based ADB and the World Bank, sources said. The Philippines is also a member of the International Monetary Fund, which is based in Washington like the World Bank.

Under the articles of agreement, the Philippine share in AIIB’s capitalization requirement totals $979.1 million for capital subscription. The bank’s total capital stock is $100 billion.

The Philippines’ membership would be still subject to the availability of funds for its share of AIIB’s capitalization, as well as Senate ratification.

AIIB members, nonetheless, have until December next year to have their respective memberships ratified by their governments.

In a statement, the DOF said the Philippine government “believes that AIIB will augment and complement existing multilateral institutions in accelerating economic growth.”

“Our shared pursuit of growth and development has only become more challenging as the global environment becomes increasingly complex. We thus welcome platforms where countries can work toward shared development goals in the spirit of partnership,” Purisima said.

“In a globalized world, connectivity is the name of the game. AIIB is a promising institution addressing investment needs and will help close financing gaps in many countries. I also see this as a chance for greater collaboration with member-countries, especially with Asean, on regional infrastructure goals,” the finance chief added.

“The Philippines, the ADB projects, stands to gain from closing this gap: accumulated reduction in trade costs is estimated to be at 15.6 percent of trade value and will result in a gain of about $220 billion in real income,” the DOF said.

However, pundits believe that the AIIB is being positioned as an alternative to, if not a competitor of the mainly US-backed multilateral lenders—the World Bank and ADB.

AIIB is also seen as a means for China to wield more power in the regional, if not, global economy.

Last year, the Philippines, through the DOF, signed a nonbinding agreement to join discussions aimed at threshing out issues ahead of AIIB’s formal establishment.

“The Philippines has taken the matter of our membership in AIIB very seriously. We have participated in the discussions leading to its creation, believing that good governance is just as important in our international institutions just as they are at home.

“We are confident that the bank’s organization design and oversight mechanisms are committed to transparency, independence, openness and accountability. We are likewise optimistic that AIIB’s decision-making processes are geared toward making it a lean, clean, green institution run like a true multilateral,” Purisima said.

Earlier, Purisima disclosed that the Philippines had “concerns about the governance of AIIB.”

“We do hope that AIIB will function based on purely financial basis and not political,” Purisima said at a conference of American think tank Center for Strategic and International Studies in the United States last June.

Moving forward, Purisima said the Philippines “stands to gain from signing on as a founding member.”

“We can look forward to deepening our country’s technical expertise in infrastructure as we expand bankable projects. Further, as AIIB has no restriction on the procurement of goods and services from any country, we may foresee market expansion for infrastructure-related industries, widening job and business growth opportunities,” he said.  With reports from Jerry E. Esplanada and AFP

The AIIB and Chinese strategy

PH membership in AIIB to depend on US, Japan

Read Next
Unemployment down to 6.3% in 2015
EDITORS' PICK
‘A greener, cleaner tomorrow’: A how-to guide for Filipinos who want to help with today’s energy crisis
Palace: US Senate move also made Duterte junk VFA
Countries with confirmed cases of coronavirus
China expands lockdown against virus, fast-tracks hospital
Get exciting deals and discounts when you download the new McDonald’s App
SM continues to send relief assistance to remote towns in Batangas
MOST READ
Taal’s sulfur dioxide emission increases
No time for revelry; Tagaytay instead plans for alert level 5
Palace: US Senate move also made Duterte junk VFA
Virus scare: 600 Chinese from Wuhan must leave PH by Jan. 27
Don't miss out on the latest news and information.