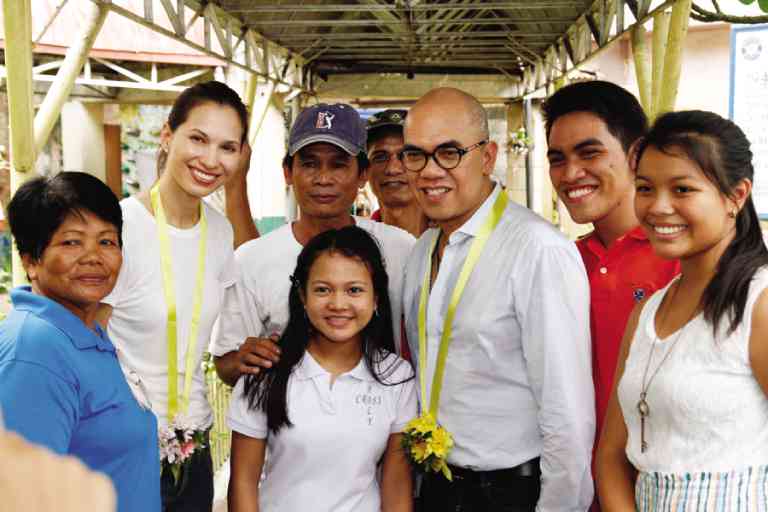 MEDVED-PO and celebrity endorser Boy Abunda spend time with some of the beneficiaries of the Hope In A Bottle project.

This former Darna star has long hung up her trademark costume, but her “powers” have thankfully remained intact.

These days, instead of using fictional superpowers to fight evil, former actress Nanette Medved-Po is using her considerable intellect, influence and passion to grow the sales of Hope In A Bottle, the entire profit of which goes to building classrooms that public school students need to get the kind of quality education that they deserve and require to have a better life.

Hope In A Bottle is a purified bottled water sold by Friends of Hope Inc., a non-stock corporation that has inspired a group of employees and volunteers to deliver a needed kind of business model—a business for good.

Launched in 2012, Hope In A Bottle started gaining support from a few forward-looking companies who are committed to nation building.

After that, the business grew organically when companies with the same goals reached out to Friends of Hope.

Friends of Hope is a small venture that started with just Medved-Po and three assistants working out of a room beside the master bedroom in the family home in Makati City.

Friends of Hope has remained a small venture with just eight salaried people with Medved-Po providing her services for free. Recently, they received a major stamp of approval and a glowing sign that they were on to something good and big.

Friends of Hope’s Hope In A Bottle thrust the Philippines into the spotlight when it won the Best New Brand and Best Community Initiative during the 12th Global Bottled Water Awards, which annually recognizes a range of categories within the bottled water industry. 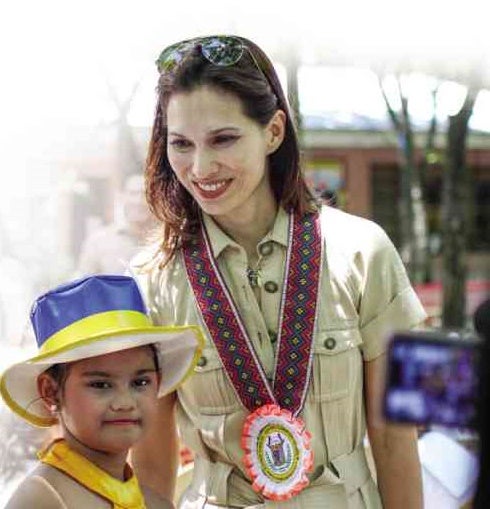 To think that Medved-Po did not even want to go to the awarding ceremonies in Lisbon, Portugal because she believed that her company was much smaller and her brand more obscure than the others vying for the same awards.

Good thing that she listened to her gut and went ahead for the night turned out to be a big one for Hope In A Bottle.

She caught the next flight back to Manila with her heart full and even more fired up to expand Hope In A Bottle and see it distributed across the Philippines.

She tells the Inquirer in an interview that she wakes up every morning raring to embrace a new day as she knows that Hope in A Bottle, which is sold in some 700 outlets nationwide such as Starbucks, UCC Cafe and the 7-Eleven convenience store chain, gives every Filipino the ability to have a direct hand in building classrooms.

For a price of just one bottle of water, Medved-Po explains, every Filipino comes away with the knowledge that his or her payment for a bottle of water will go to the building of a public school classroom, perhaps even in his or her own hometown.

She stresses, however, that Hope In A Bottle is not a charity organization but rather an organization that is out to compete head-on with any other bottled water distributor in the Philippines, even multinationals that have expanded to bottled water to add to their list of beverage products.

It also pays its people market prices, although Medved-Po does not collect a salary. To provide an authentic cost structure for the sustainability of its operations, it must be able to compete for the profit, instead of banking on a “pity purchase” from those who may want to help in its campaign for public schools.

“Relying on donations alone will not work. That may work for small things but what we are trying to attack is a big problem, so we have to be sustainable and stand on our own two feet as a supplier, as a consumer goods company,” she says.

For Medved-Po, sustainability is key.

She does not want Friends of Hope to go the way of many organizations with a social services bent that were unable to sustain operations because they simply could not compete in the unforgiving marketplace.

They may get that purchase one time from friends and family. But in the end, the money will chase after that product that will give more bang for the buck.

“We are a bottled water company that just so happens to use all of the profit to build public schools. When we approach potential clients, we want to be treated just like any other supplier,” shares Medved-Po.

Medved-Po says she chose water as the company’s major product because it is a basic commodity.

People know it, people need it and there is no magic formula.

More importantly, she does not need to convince people to buy it. 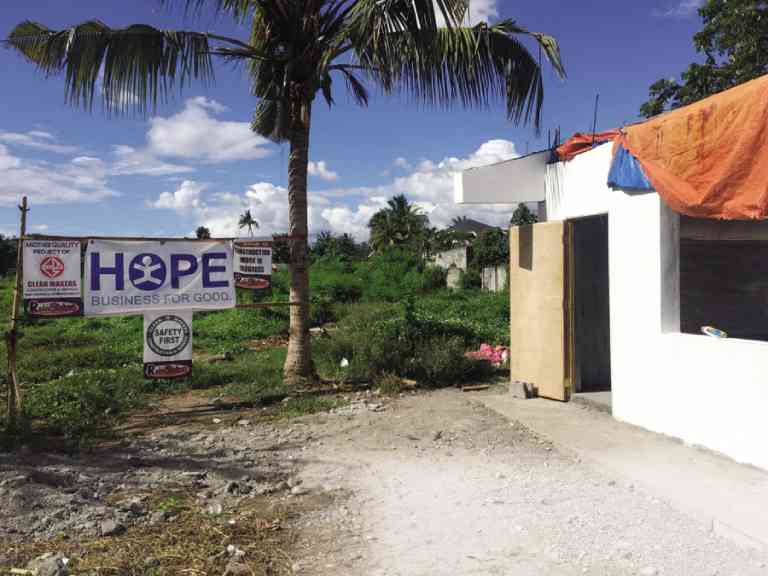 VITACOCO’S classrooms at the General Santos City National High School for the Arts and Trade extension are the first real classrooms of the school of 350 pupils.

Hope In A Bottle hopes the offer is something the public cannot refuse.

“We are not selling water. We are selling that idea of hope,” stresses Medved-Po.

She says Friends of Hope zeroed in on public school classrooms because about 88 percent of the student population studies in public schools and every city needs all the help it can get.

The pressing need for education facilities is too much for government alone to address, she says.

So far, Hope In A Bottle has helped put up 28 public school classrooms from the sale of four million bottles of water since the launch in 2012.

Now that Medved-Po and her band of merry workers have ironed out most of the kinks, she says the next challenge is to ramp up operations and perhaps fulfill the dream of Hope In A Bottle having its own production line.

“My big hope for 2016 is to complete plans regarding production,” says Medved-Po.

She has had her share of success when she was still active in the movies, but Medved-Po says she derives the most fulfillment from playing her lifetime roles, that of wife, mother of two and chief executive of a growing enterprise that is in the enviable business of changing lives, one bottle at a time.