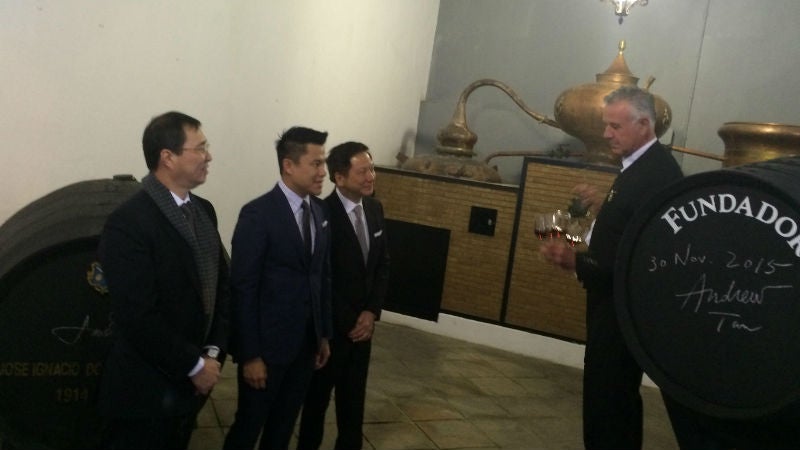 The purchase solidifies Emperador’s position as the world’s largest brandy company and makes the Tan-led firm one of the largest foreign investors in Jerez, the brandy capital of Spain.

Under the deal closed on Saturday in Madrid, Grupo Emperador Spain S.A., a company owned by Emperador Inc., will acquire the brandy and sherry business of Beam Suntory in Jerez.

These brands carry a unique heritage and market leadership position in their respective categories, Emperador said in a statement furnished the Inquirer.

Today, it is Spain’s largest export brandy and is sold in more than 30 countries. Fundador’s biggest export market is the Philippines, where it has been the clear leader for more than a century.

Emperador will likewise take over a brandy distillery in Tomelloso, Spain, which has a sufficient aging inventory of brandy and sherry that Emperador officials believe will drive the company’s growth.

Nomura was tapped as the sole financial advisor while Allen & Overy was hired as the legal adviser for the transaction.

The deal was sealed with the ceremonial signing of barrels at Bodegas Fundador in Jerez.

Tan wrote “A New Era Begins” while Emperador president CEO Winston Co wrote “Sa Totoong Tagumpay” (for real success), which has been the slogan of Emperador for years.

The ceremony was witnessed by Fundador executives and employees late Monday morning in Spain. Tan and Co signed the messages and the historic date of Nov. 30, 2015.

Tan said in a statement that the investment was “really close to my heart.”

“I haven’t really slept for weeks thinking about this. And now, I am very happy that I made this important decision of buying this largest and oldest brandy in Spain that has also been a very iconic brand to Filipinos for more than a century,” he added.

His late father, Tan Ha, had invited his friends and relatives to celebrate the younger Tan’s graduation. They opened and eventually finished three bottles of Fundador. Thus, for Tan, Fundador never fails to bring back memories of a special moment shared with his father.

The investment cements the Philippines’ position as one of the largest investors in Spain, said Carlos Salinas, Philippine ambassador to Spain.

“We are very happy that this particular event has taken place because it makes a mark that the Philippines is looking more and more into Spain for possible investments,” Salinas said in a statement.

The purchase will have an immediate positive impact on Emperador’s bottom line, according to Co.

“The acquisition of the Spanish assets and Fundador brandy is immediately accretive both to Emperador’s revenue and net income. With the combined global reach of Whyte and Mackay and Fundador, our expanded product portfolio will have access to more than 100 countries around the world,” Co said.

“[Also] in our pipeline are several proudly Philippine-made products that we intend to introduce to the international markets starting next year,” Co added.

It has also expanded its local products with the launch of Smirnoff Mule in May as well as Andy Player Whisky, to add to the best-selling Emperador Light.