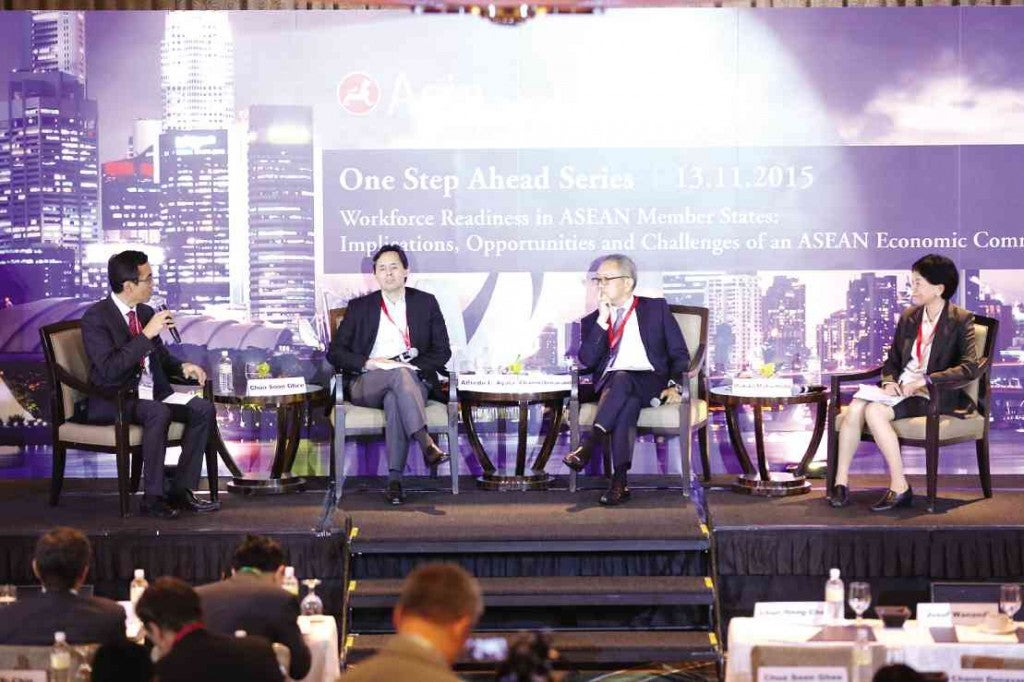 (FROM left) Chua Soon Ghee, partner and head of Southeast Asia of A.T. Kearney; Alfredo I. Ayala, CEO of Ayala Education Inc. and LiveIt Investments Limited; Chanin Donavanik, managing director and CEO of Dusit International; and Makiko Matsumoto, employment specialist of the International Labour Organization, Asia-Pacific; in a panel discussion on fulfilling the needs for a growing medium-skilled workforce.

Filipino professionals hoping to work in highly technical fields suffer from a significant “skills gap” between their current capabilities and what their prospective jobs require of them—a divide that must be bridged if the country is to take full advantage of the upcoming integration of the Asean region.

This was the preliminary finding of a study commissioned by JP Morgan from the Singapore Management University to assess the readiness of the five largest economies in the region—Indonesia, Malaysia, Philippines, Singapore and Thailand—ahead of the establishment of a single regional market by yearend.

Despite this government-led focus, much remains to be done to make these sectors ready to face competition from within the region as well as markets beyond.

“Skills gaps are expected to be an issue in a number of sub-sectors within these priority sectors, especially in occupations and professions such as system analysts, engineers, programmers and health care service providers, requiring science, technology, engineering and mathematics (STEM) education,” the JP Morgan-SMU study says.

Presenting the preliminary findings of the ongoing study at a recent forum in Singapore, SMU social sciences school dean James Tang notes that “gaps are much bigger at the higher end of the value chain, namely at the level of managers, supervisors and specialists.”

“The situation is exacerbated by ‘qualification inflation’ particularly at the tertiary level as well as labor market inefficiencies that are causing an over-supply of certain professions such as nurses, seafarers and school teachers,” he says.

The JP Morgan-SMU study points out that the country’s skills gap problem is being aggravated by “the large outflow of skilled workers, especially managers and professionals in the hospitality and tourism industry as well as those in technical fields such as IT and engineering.”

“Not enough attention is seen to be given to addressing this issue partly because Filipino workers overseas are regarded as a main contributor to the economy through the remittances they send back,” it says, “Unless the country is able to retain a larger proportion of its skilled workers, it could be difficult to develop the strengths in the priority sectors that the government has identified.”

To help remedy the situation, JP Morgan Chase & Co.’s Philippine unit invests heavily in education, both as part of its operations as well as its corporate social responsibility initiatives, according to managing director and senior country officer Roberto Panlilio.

“We really believe that education is the way to bridge this gap, so we’re working closely with schools to identify what kind of skills we need in the graduates that we hire,” he says, noting that JP Morgan’s BPO operation, employing thousands of workers, is the largest of its kind serving a single (or “captive” client) in the country.

“At the same time, we also have CSR initiatives that help train people from underprivileged communities about entrepreneurship,” Panlilio says, “It’s all about educating and empowering people.”

He points out that the government and the private sector must work together to come up with a cohesive strategy that will help ensure the continued competitiveness of the Filipino labor pool amid growing competition from neighboring markets.

He cites the BPO industry as one undertaking that has benefited from having such a roadmap.

“Just imagine: If we had this kind of focus in BPOs, where it is difficult to find the talent we need, [the industry] should be employing 2 million Filipinos today instead of just 1 million,” Ayala says. “If we want to maintain our competitive advantage, we have to invest in education.”

Panlilio and Ayala agree that, in the upcoming unification of the 10 economies of members of the Association of Southeast Asian Nations (Asean), the services sector—which includes the booming BPO industry, alongside other professional services—will be the Philippines’ trump card.

And if the country is to maintain this natural advantage over its Asean neighbors, both stress that significant investments must be made in the education system to better equip Filipino workers with the skills necessary to compete in a globalized economy.

By engaging in a continuing dialogue with universities and colleges, JP Morgan helps ensure that graduates who come applying for work at its Philippine operations are ready to hit the ground running on their first day on the job, Panlilio says.

Ayala goes even further back, pointing to the advocacy of Ayala Education to push for the implementation of the 12-year basic education curriculum from the present 10-year system.

But no single stakeholder working alone can ensure the continuing competitiveness of the Filipino worker in a globalized workplace, and the JP Morgan-SMU study stresses this.

“Government plays a significant role in providing information about skills gaps in key industries,” it says. “To do this effectively, it needs to establish mechanisms for active, structured and meaningful consultation with industry players on a regular basis.”

Only a high degree of cooperation among all stakeholders will help the Philippines bridge its yawning skills gap and be fully prepared for the single Asean market.