Jeremy Castro: To last in this industry, you need ‘a strong heart’ | Inquirer Business

Jeremy Castro: To last in this industry, you need ‘a strong heart’ 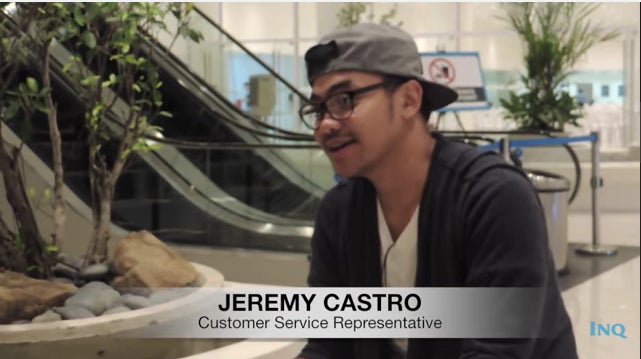 “We are not just call center agents,” says Jeremy Castro, dismissing the notion that all it takes is an American accent to make it in the Philippines’ thriving business process outsourcing (BPO) industry.

It takes a lot of “skills and perseverance” and “a strong heart” to survive the demands of the industry, the  customer service representative for Acquire Asia Pacific in Quezon City says. “But as long as you know what you’re doing, then it’s going to be a walk in the park.”

Castro began his call center journey in 2010 as a customer service representative for Convergys.

Castro stopped studying when he was in his second year in college. His nursing course wasn’t his choice; he wanted to take psychology but needed to earn enough first. Now he says with the money he’s earning, he will definitely go back to school, sometime in the future.

How does the life of a call center agent start?

In the case of the 24-year-old Castro, it begins at 6 am, with a reading of the Bible.

“I have this daily regimen where I read the Bible, read a passage, meditate on it, just enough to get me by. It gives me that boost I need for the day. That is enough for me to go to work.”

He leaves the house at 7 am and arrives at work 30 to 45 minutes before his 8 am shift starts.

“When I arrive in the office, I just prepare myself then I am ready to take calls. That’s how my whole day would be,” he says.

He describes his work taking calls on the floor as “toxic but fulfilling.”

“It’s fulfilling,” he says. “Mostly toxic. But then I got used to it.”

After eight hours at work, he then calls it a day. He goes straight home or attends a church service on certain days of the week. Sometimes, he goes out with his friends to watch a movie or simply stroll in the mall.

Castro says he is working hard to gain the financial independence he needs to go back to school while still remaining involved in the BPO sector.

“I wanna study again. I have goals, one of which is  to finish my studies. I also want to be a quality analyst.  I wanna see myself also as a psychology graduate. Don’t limit yourself,” he says.

He says he knows that some people outside the industry look down on call center agents.

“I get that a lot. It’s like they are degrading [us]. I don’t blame them. I was like them before.”

His own perception about the call center industry changed when he witnessed how challenging and fulfilling the  work of call center agents truly was.

Castro says clients prefer Filipinos because they are hospitable and patient.

“One thing would be Filipinos are very hospitable and we have high tolerance for bullshit. We are very empathetic and we know how to put ourselves in others’ shoes and we are more than willing to help others.”

And Filipinos are quick to adapt to the new language environment.

His own experience, he says, was indicative. “Being in the industry for two years, I can say I learned enough. But of course,  I am continuously learning.”

Castro says he sees himself serving in a higher position in the near future. Many options are available in the BPO industry, he says, because it’s an agent’s competencies that matter in the end.

“I don’t want to stay where I am,” as a customer rep. He says he wants to be a quality analyst —and finishing his studies would help him secure that higher position in the call center industry.

He admits that competition is “very tough” in the industry, but believes that being equipped with the right skills and displaying the right character would allow him to reach his goals.

“You have to have humility and a strong heart, because if you don’t, you’re not gonna last in the industry.”