Filipino consumers 3rd most confident in the world in Q3 2015 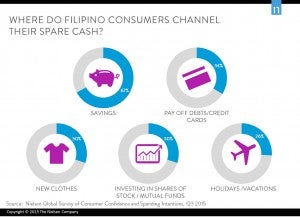 NEW YORK CITY–The Philippines ranks third globally as home to the world’s most confident consumers in the third quarter of 2015, despite posting a quarter-on-quarter decline of five points to a Consumer Confidence Index score of 117. The year-on-year trend for the Philippines was up two points, however.

While consumer confidence across a number of Southeast Asia markets has taken dips in Q3 2015, the other countries in the region which remained as the world’s top 10 most optimistic are Indonesia, Thailand and Vietnam.

After the Philippines, Indonesia closely follows as the market with the fourth most confident consumers, with a score of 116, dropping four points from Q2 2015 and down nine points year-on-year, while Thailand (ranked 5th globally) is flat quarter-on-quarter with 111 and down marginally (2 points) compared to the same quarter a year ago. Vietnam ranked 10th globally with a Consumer Confidence Index score of 105, up one point quarter-on-quarter and up three points year-on-year.

In this round of the global survey, job security, work/life balance and health feature prominently in the Filipino consumers’ list of key concerns.

Saving is a top priority

Similar with the consumers in Southeast Asia, Filipino consumers continue to give financial security top priority. Close to seven in 10 respondents in the Philippines (67 percent) put their spare cash into savings, while 30 percent invest in shares of stock or mutual fund. Discretionary purchase intentions high on the priority shopping list of consumers in the Philippines include spending on new clothes, and holidays/vacations.

9 dead, 6 arrested in series of raids in Calabarzon