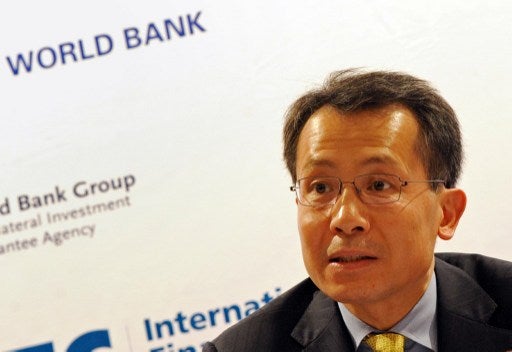 WASHINGTON—Two top aides of World Bank President Jim Yong Kim, including his controversial chief financial officer, are stepping down, according to a Bank internal memo obtained by Agence France-Presse (AFP) on Friday.

The two became key lieutenants of Kim after his arrival in July 2012, crucial to his efforts to implement deep reforms at the huge development institution.

The CFO, Bertrand Badre, a former banker with French firm Societe Generale who arrived in March 2013, was tasked by Kim to implement a sweeping cost-reduction plan while expanding the bank’s lending capacity.

In the memo to staff, Kim said Badre would leave the bank in March 2016.

“I understand his decision and would like to thank him for his strong contributions and conscientious service to our institution,” Kim said.

In addition, Chinese banker Jin-Yong Cai will step down as World Bank executive vice president and chief executive of its private-sector lending arm, the International Finance Corporation, at the end of the year, Kim said.

Both have been touched by controversies while at the bank. Last year Badre, who was in charge of implementing spending cuts, came under criticism from staff over his compensation.

The IFC meanwhile came under strong fire for involvement with businesses tied to human rights violations.

Badre also drew criticism over the handling of a controversial $1 billion loan from China to support projects for the poorest countries that was arranged in an unusual structure involving the IFC.

An internal investigation found nothing untoward in the handling of the Chinese loan.

Kim praised Badre as “invaluable in putting in place critical revenue capacity and cost-control measures that have both strengthened and reframed the institution’s financial sustainability.”

“He has led the World Bank toward the development of new, innovative financial products and services, more effective use of capital markets and insurance mechanisms.”

Cai, meanwhile, “brought creativity, vision and a passionate yet practical approach to development during his tenure in IFC,” Kim said.

In a comment emailed to AFP, Badre said: “I am proud of my record of accomplishments here and am now looking forward to new challenges.”