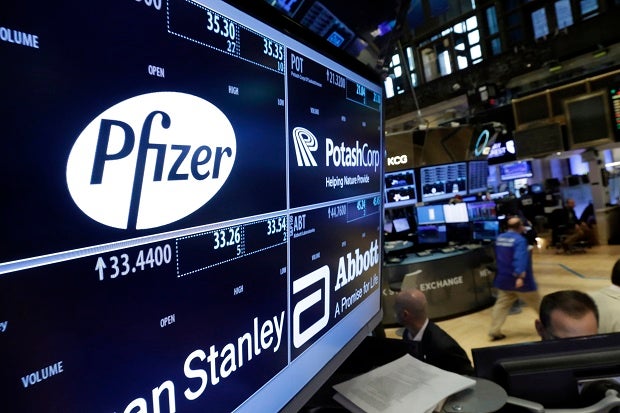 The logo for Pfizer is displayed on a trading post on the floor of the New York Stock Exchange,Thursday, Oct. 29, 2015. Allergan, which makes Botox, jumped 8 percent after saying it has held talks with Pfizer about a sale. AP Photo

NEW YORK, United States—Botox-maker Allergan said Thursday it was in “friendly” merger talks with Pfizer that have the potential of forming a $300 billion pharmaceutical behemoth.

Based on its market value, Allergan’s price could run $113 billion or more, making the deal, if it happens, the largest takeover in what is already a record year of merger and acquisition activity on Wall Street.

Ireland-based Allergan said in a statement that it had been approached by US-based Pfizer and that it “is in preliminary friendly discussions regarding a potential business combination transaction.”

In an interview with the Wall Street Journal, Pfizer chief executive Ian Read confirmed the talks and said that a key motivation was to move the US company’s tax domicile offshore to take advantage of Ireland’s much lower corporate tax regime, in what it called a corporate tax inversion.

A deal would combine Allergan, with nearly $20 billion in annual sales, with Pfizer, which is valued at $218 billion and has nearly $50 billion in sales.

Allergan is best known for its rejuvenating Botox drug, while Pfizer’s top-line treatments include the anti-cholesterol treatment Lipitor and Viagra, used to help with erectile dysfunction.

If Pfizer relocates its statutory headquarters to Allergan’s base in Dublin, the deal could bring huge tax savings.

Pfizer had been looking for an address-changing “tax inversion” merger despite opposition to such deals by the administration of President Barack Obama.

In 2014 it was rebuffed by British drug maker AstraZeneca in a hostile $117 billion bid.

In a call with analysts on Tuesday, Reed stressed, when asked about the inversion option, that his team “is not afraid of taking bold steps, and we’re looking at opportunities. And when we make our decision as to what is the best way of enhancing value, we will move.”

Asked Thursday about the potential Pfizer-Allergan inversion deal, White House spokesman Josh Earnest declined to address it specifically but said Obama “has made quite clear that this is the kind of loophole that leaves a lot of Americans shaking their head and wondering.”

Allergan said that the negotiations would not interrupt plans to sell off its global generic drugs business to Israel’s Teva, a $40 billion deal announced in July.

The company said it expects to complete the generics division sale by the first quarter of 2016.

That sale would give Allergan cash to pay down some of the debt that came with its acquisition of Actavis earlier this year for $70 billion.

If concluded, a Pfizer-Allergan merger would be the largest of a series of giant takeovers in the health and drugs industries.

The news of the talks came two days after the number-two and number-three US drugstore chains, Walgreens Boots Alliance and Rite Aid, respectively, announced a merger valued at $17.2 billion.