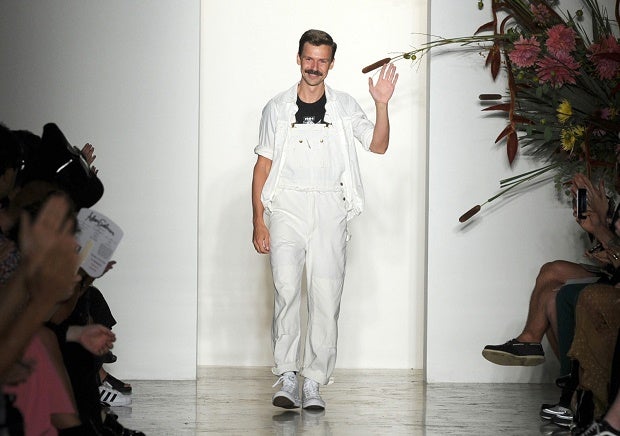 In this Sept. 10, 2015 file photo, designer Adam Selman waves to the audience after his Spring 2016 collection was modeled during Fashion Week in New York. MasterCard is pairing with fashion designer Adam Selman and others in a program aimed at making an array of consumer products that can double as mobile payment devices. AP FILE PHOTO

MasterCard is pairing with fashion designer Adam Selman and others in a program aimed at making an array of consumer products double as mobile payment devices, including clothing but also automotive products and “yet to be imagined categories.”

“The idea is that virtually any device can be a commerce device,” said Sherri Haymond, group head of digital channels for MasterCard, in a telephone interview Tuesday. The program was unveiled Monday at the Money 20/20 conference in Las Vegas.

Selman works closely with pop star Rihanna and designed her famous, very sheer dress for the 2014 Council of Fashion Designers of America awards. How one would hide even a microchip in such a sheer garment is, of course, hard to imagine, but Selman was chosen, Haymond said, “because he is extremely innovative, really creative. When we met Adam, his vision and our vision really connected.”

Other partners set to be involved in the program: General Motors, wearable technology maker Nymi, jewelry company Ringly, and Bluetooth locator TrackR, according to MasterCard.

Haymond said the program uses existing technology and functionality that MasterCard has been working on for two years. “People can pay with what’s most accessible to them,” she said.

In the past several years, a number of fashion designers have ventured into wearable technology, with everything from clothing that measures various health functions to accessories that charge devices.

As for Selman, he has produced a prototype of two dresses, gloves, sunglasses and a handbag, all imbedded with microchips for payment.

“Technology is vital to the fashion industry,” Selman said in a statement from MasterCard. “What sets the program apart is that it features the technology, while still remaining invisible, yet interactive and totally functional with the wearer.”