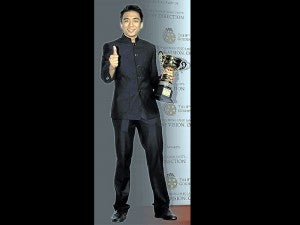 THUMBS UP on attitude and riding skills. Maico was a real winner.

MANILA, Philippines—You just love to hate Maico Greg Buncio. He has that swagger and boyish charm that can easily win over any girl’s heart. His mastery of the motorcycle can even make veteran title contenders respect and watch him with cautious eyes.

And with that spark of hunger in his eyes, anyone would tell he is definitely not done amassing championship titles and race records.

Indeed, this wonderkid from Mandaluyong City may be considered a rare gem. In 2007, during his rookie year in superbike racing—he used to compete in motocross as well as underbone events—Buncio amazed everyone when he snatched the crown from then reigning 10-time Superbikes champion Jolet Jao.

For the next three years, he would hold on to the Superbike National Champion title while at the same time dominate other motorbike events including the FBO Motocross Series in Tagaytay, the FMF Memorial Day Motorcross Races in California, and in various competitions at the Batangas Racing Circuit.

Setting his eyes on similar competitions abroad, the 2011 Golden Wheel Driver of the Year was chosen by Team Suzuki Pilipinas to be among the country’s representatives in the Asian Road Racing Championship, Asia’s premier circuit racing championship for motorcycles and a stepping stone to the World Superbike Championship and eventually the MotoGP.

Having debuted in the inaugural race held last April 28 at the Sepang Circuit in Malaysia, Buncio was looking forward to the next stages that will be held in Sentul Circuit in Indonesia (June 9 to 12) and Madras Circuit in India (August 4 to 7).

However, fate played a cruel hand, as Buncio’s GSXR 600 motorbike slipped into loose gravel last Saturday while completing a qualifier race of the Underbone King Challenge held at the Clark Speedway Racing Circuit in Angeles, Pampanga.

Buncio was thrown off his bike, crashed into an unfinished barrier of the race track where a protruding steel bar punctured his body, damaging his kidney and liver in the process.

He was taken to a hospital in Mabalacat town before he was transferred to the UST Hospital where he died the next day.

“Maico was like my baby brother in racing. When I was still racing in superbikes he was then lording over dirt bike and underbone competitions,” reminisced Love-Love Tioseco, the country’s first female superbike racer and a close friend of Buncio.

Tioseco added that Buncio’s death highlights the inherent danger in motorsport and that danger always lurks in a sport that can never be made 100 percent safe.

But while freak accidents are a sad reality of motorsport, the death of Buncio has sent shockwaves throughout the local motorsports industry that asks to look into the issue of track safety, track maintenance and improved medical facilities at the tracks.

Team Suzuki Pilipinas, in a statement, said that Buncio has survived numerous crashes in the past, often unscathed.

“But the injury he suffered from the ill-prepared racetrack is unprecedented. An investigation will be conducted to determine the extent of neglect on the maintenance of the racetrack resulting in its unsafe condition, and the accountability on the part of the owner of the racetrack.”

According to Suzuki Philippines’ Eilleen Esteban, Buncio’s family is considering filing a case against the operators of the Clark International Speedway because of the fact that the young rider “didn’t die in the crash itself.”

He will issue a statement after meeting with the people who supervised the races. Tan said he was not present when the incident happened.

Questions are also being raised on the procedures the medics on site handled the emergency situation that might have paved the way for Buncio’s massive loss of blood caused by puncturing of his liver and kidney.

Suzuki, meanwhile, is bent on pursuing its campaign in the Asian Road Racing Championship Series and is looking for the best rider to fill in the space left by the talented Buncio, this year’s Golden Wheel Driver of the Year and the Philippine Sportswriters Association awardee for motorsports.

Tioseco informed the presence of debris in the race tracks has been a major concern of riders for years adding that both the Batangas Racing Circuit and Subic Clark International Speedway are no stranger to these track hazards.

“Whenever we race in these two tracks, we always worry about these track hazards. We have no choice but to go over them and hope to God nothing goes wrong. It takes time for the track cleaners or maintenance guys—if there’s any—to clear these filth and by the time they’re done there’s a huge chance there is no longer enough time for us to hold the race,” Tioseco said in an e-mail to Inquirer Motoring.

It is said that only after a spectacular accident or death of a famous motorsports personality that authorities are spurred to formulate rules that would increase safety of the player if not improve safety of the game environment.

Just like what has befallen two of the country’s motorsports icons Arsenio “Dodjie” Laurel (who died during the Macau Grand Prix in November 1967) and Edward Jovy Marcelo (who was killed while completing a warmup practice for the 1992 Indianapolis 500), the passing of Buncio will surely impact the local motorsport scene, which is still evolving and yet to fully mature.—With a report from Mark Anthony Reyes