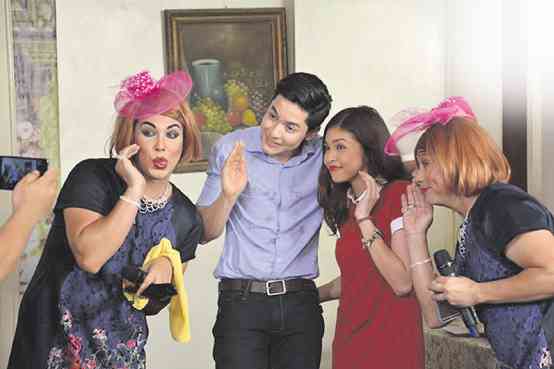 The “AlDub” phenomenon has attracted many new viewers to the 36-year-old noontime TV show Eat Bulaga since July 2015.

“AlDub” is a play on the names of celebs Alden Richards and Maine Mendoza, better known as “Yaya Dub.”

They rose to fame as a love team in the “kalye-serye (street series)” segment of the TV show.

The unconventional “antagonist” in their love story is the conservative Lola Nidora, whose take on the traditional Filipino values provide another comedic backdrop.

The formula has created a new fusion category of entertainment with values education.

Marketers can learn many lessons from the phenomenon:

Strategy is a choice. Before making a marketing strategy, the marketer must be aligned with the business strategy and recommend changes to management.

Many firms operate the same way. They follow the same logic based on best practices and benchmarking.

Best practices, however, are good only until the next practices are discovered. Benchmarking, on the other hand, makes you look more like your competitor.

Interestingly, Eat Bulaga did not follow the traditional ways in creating “Aldub”—which are to hire fairer-skinned celebrities, get sexy backup dancers, or create humor that may be potentially offensive.

In many ways, competition tries to be unique in the same way by following the logic of the industry. Eat Bulaga was courageous enough to inject values education to a noontime show.

By Oct. 3, 2015, Eat Bulaga began to take the lead with 4.3 million households viewing, while Showtime’s dropped to 2.5 million.

A look at past data from market research leader TNS revealed that among teenagers and tweens, Showtime was the favorite TV show in 2011 among 30% of respondents versus only 8% for Eat Bulaga.

What happened in between is a very interesting case study of a lesser known strategy practice—the market-driving strategy.

Thus, the marketer needs to consider ways to attract the bigger unserved and underserved markets. Instead of doing the usual market-driven strategy that focuses on simply satisfying customers in the served market, the marketer needs to expand by exploring from a set of nine potential unserved and underserved clusters, collectively known as “New Demand Wheel” in Mansmith’s Market-Driving Strategy program.

Many marketers are in love with their usage, attitude and image (UAI) annual ritual, but that is not the right source for the market-driving strategy.

Blame it on inadequate key performance indicators (KPI) that marketers are so engrossed with to keep their preferred-brand status.

Just look at the multi-vitamins category. They started by giving out one piece free, and then later, two pieces extra for a one week’s supply.

Brand preference is important, but it can’t be sustained without attaining brand relevance. The latter focuses on the right target market and their unmet needs.

The common factor in the unmet needs of noontime shows appears to be the thirst for clean, wholesome family fun.

Different categories now exist as Eat Bulaga has repositioned itself not just to entertain but to introduce values.

Companies can, of course, create more game-changing ideas before competition catches up. After all, ABS-CBN is not known to be a passive competitor as evidenced by their leadership in the primetime.

To create innovation, solving pain points is basic, but solving it in a pioneering way makes all the difference.

Eventually, even the served market patronizing competitive offerings would be willing to shift.

The key to a pioneering market-driving idea is to challenge existing practices.

Why should a TV show hire celebrities instead of ordinary-looking people? Why is trash talk needed instead of encouragement?

Simply look at the list of what made winners win in the served market and begin from there.

Starbucks made its customer area bigger by at least 30% by removing the kitchen, an important part in the restaurant industry. Expertise in the served market can be a barrier to thinking out-of-the-box because it’s hard to stop practicing something that has been assumed as a given.

The principle of selectivity is telling the marketer not to fall in love with the same marketing plan over and over again.

If Eat Bulaga creates a Twitter campaign, should its competitor have a counter campaign? If Eat Bulaga has a social media personality, should competition create one, too?

An inquiry with top executives of top retailers in the Philippines showed only a handful of their suppliers have category-growth strategies during business reviews. On the other hand, 99% have brand-growth plans based on brand-switching tactics.

This has become so bad that in many companies, marketing is actually no more than a promotions department. They forget that opportunity-seeking is the first step of the marketing management process.

In order for marketers to be more strategic, their existing market-driven world view must be balanced with a newer, market-driving strategy perspective through a fourth KPI—market penetration. This new KPI will create a longer-term view in the marketer’s orientation.

It’s time for marketers to go back and re-learn marketing. Remember, facts in a market-driven strategy are merely assumptions in market-driving.

(Josiah Go is chairman and chief marketing strategist of marketing training and advocacy firm Mansmith and Fielders Inc. He will be conducting the 28th Market-Driving Strategy executive bootcamp on Nov 25-26, 2015 to help marketers learn what has not been taught in schools. Follow his blog at www.josiahgo.com. He can be contacted at [email protected])