London barbershop has the most number of Filipino barbers 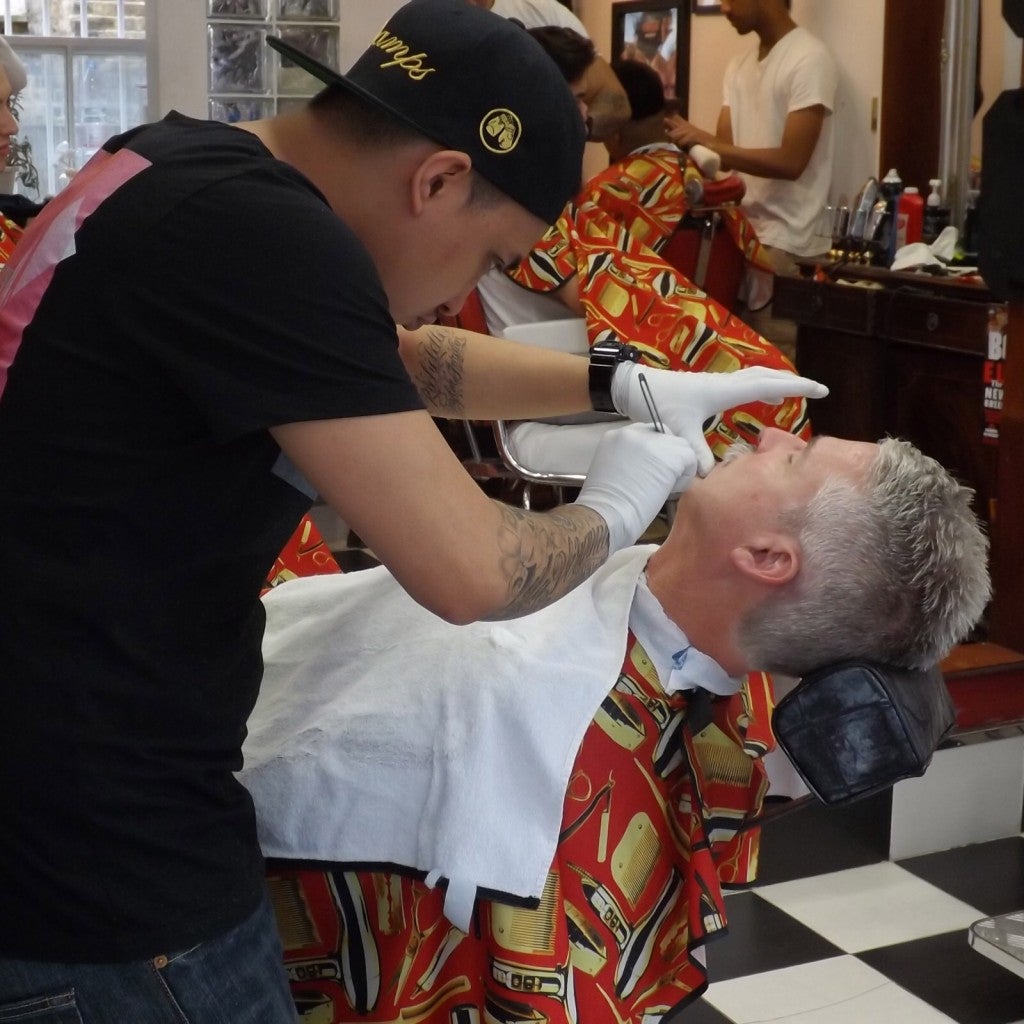 He cuts hair in London but has never cut his ties with the country of his parents and grandparents. He is even proud to tell people that they were migrant workers.

On 31 Riding House Street, right next to BBC London and Oxford Circus, is Champs Barbers, a boxing-themed barbershop where many celebrities, movie stars and sports personalities go for hairgrooming.

Splashed on the walls are boxing memorabilia, including some autographs of boxing history’s greats. It has gained a loyal following, not only from people all over London, United Kingdom, but also from other places in the world. One of the reasons: It employs the most number of Pinoy (Filipino) barbers, including a Pinay (Filipino female) haircutter.

The barber who has stayed the longest in the shop is Troy Argones, a Filipino born in the UK whose parents were also brought to the UK by their parents.

Young and energetic, Argones belongs to a new generation of migrant workers, Filipino in looks, culturally British but has not forgotten his Philippine roots.

“I am the first of the Argones family to be born in the UK and also the first in a long time to take up a career on this trade,” he narrates.

He came from a family of barbers. His great grandfather had a salon with four chairs and his grand uncles helped out whenever they were on leave from the Philippine army.

Argones’ parents came to the UK as teenagers and met while they were growing up in London. Originally from Pangasinan, his “Lola” (grandmother) was a grade school teacher, who, together with his “Lolo” (grandfather), migrated during the 70s. His mother and uncle spent a few years with their relatives in Bulacan before they were petitioned in 1983. 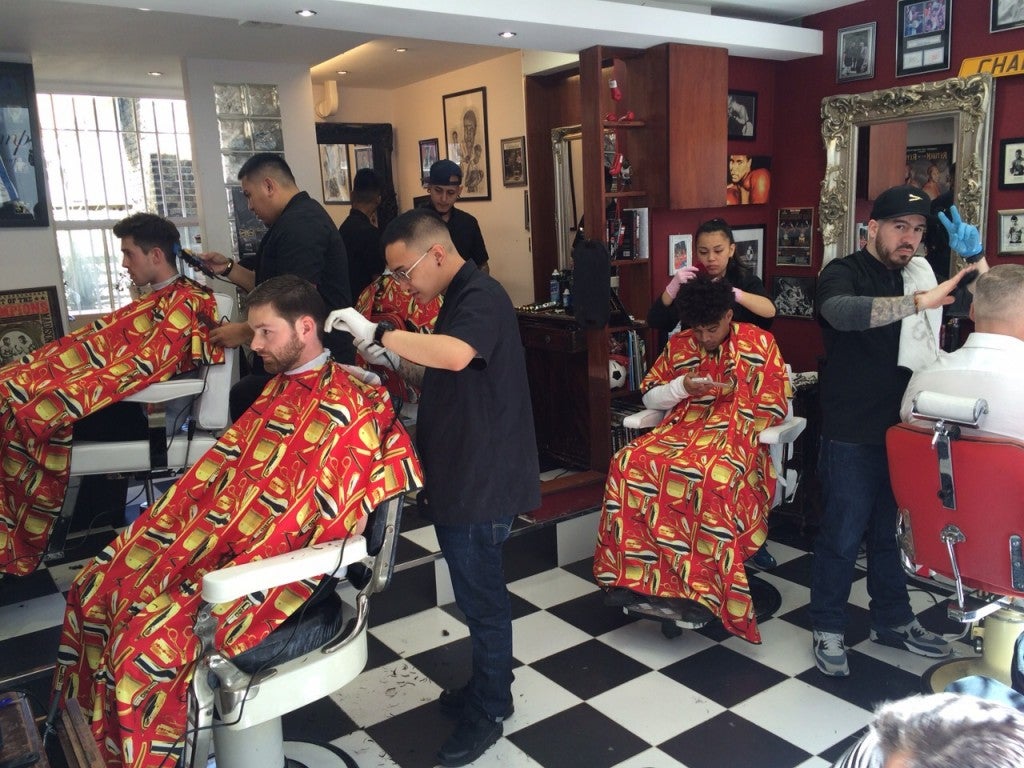 Champs Barbers employs most number of Filipino barbers, including a Pinay, in London. CONTRIBUTED PHOTO/Roger Pe

His Lolo on the father’s side was a Bicolano architect and worked as a building inspector in Makati when it was still a municipality. His dad, two brothers and sisters, also came to the UK in the late 70’s.

Argones’ grandmother was once featured in London’s newspaper Daily Mail while being put under house arrest for failing to disclose that she had children when she migrated to the UK. She helped the famous journalist John Pilger in making it possible for families to migrate to the UK by taking part in protests and petitioning the UK government.

By working the most, Argones has gotten to where he is now, helping manage the shop’s day-to-day operation, assigning customers to barbers, and keeping an eye on the shop’s resources. He has become a favorite among children of OFWs (Overseas Filipino Workers). It is probably because of the way he connects to them, more meaningfully rather than routinary.

“When the job is finished, my job does not end there. I share my skills and teach them how to become independent early,” he says.

It all began as a hobby when he was sixteen years old. With a pair of clippers bought from Tesco, he experimented with friends and members of the family. He became good at it until he became a professional barber for three and half years, the last two spent at Champs.

After opting out of university at age 21, Argones worked in retail jobs for five years. He became serious about barbering when he found out he was going to be a father.

Cutting hair is one of the longest living crafts in history, Argones says. “It has allowed me to meet people with beautiful minds, be myself and meet cool people. It gave me a chance to help build people’s confidence.

Here, I am allowed to express myself creatively with different haircuts. Every day is different, so you’ll never know what kind of experience will walk through the door,” he intimates.

In his current job at Champs, Argones and his fellow Pinoy barbers always do their best to please customers. The shop has a big Filipino following, mostly young Fil-Brits.

“I would love for all Filipinos to come to our shop. I have customers from all over the globe who’ve become great friends and haven’t let anyone cut their hair since I started at Champs,” he says with pride. 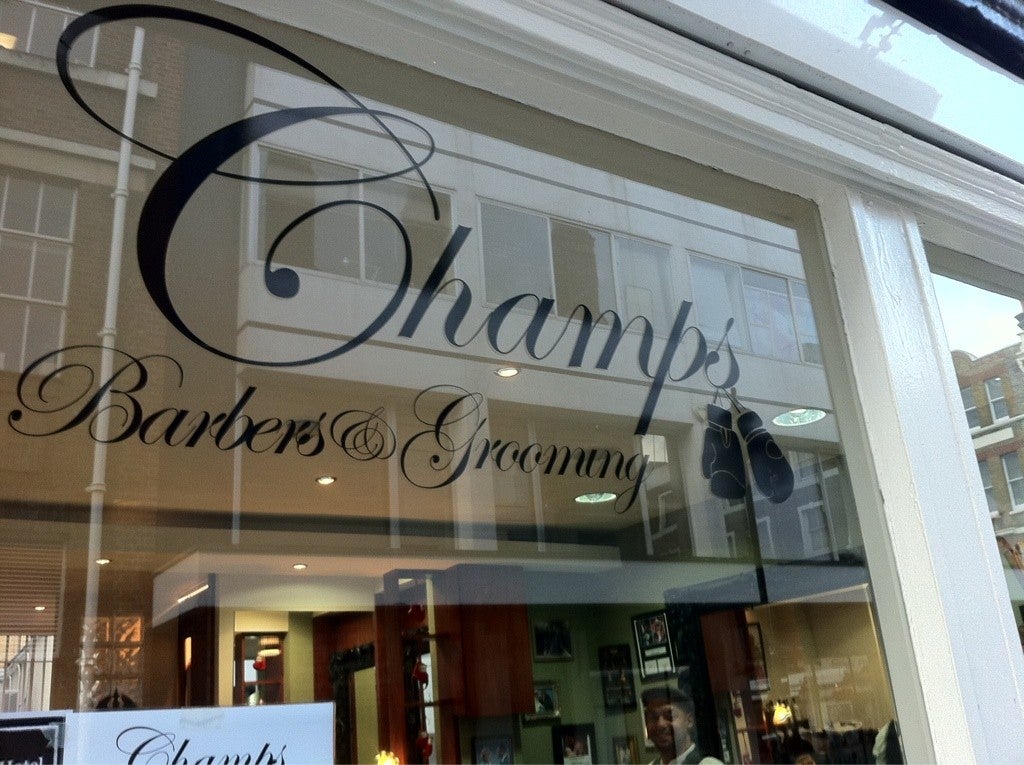 Champs Barbers was opened by Colombian Ian “Champ” Hoyos, a professional barber and boxing enthusiast, in early 2012. When he started, Hoyos made sure that Champs would be the best so he hired the best barbers around London. To date, its popularity continues to soar due to positive word-of-mouth and good reviews it has been getting on social media.

When not working, Argones is a family man. He likes to take his fiancee and son out or just relax with them at home. “Either way, there’s nothing better than spending it with my family,” he says. A man who appreciates small things in life, Argones likes good music, food and love to mingle with people.

When he was growing up, Argones’ parents worked full time. He and his sister were mostly looked-after by his grandmother, an experience that taught him to know more about the country of his parents. The values that he learned were something he also wanted to pass on to his children.

“For dinner, we always had a choice of two dishes our Lola prepared for us, “Sinigang” or “Tinola”, both of which I love, but Lola’s “Pork Sinigang”, with a splash of “patis” is my favorite,” he reminisces.

There are many chefs on both sides of the Argones family. His Lolo Abel worked in many hotels in London. His Tito Dun worked as a Teppenyaki chef in prestigious “Matsuri” in Greenland, London, and “Yumenoki” is his Ninang Ami’s successful restaurant in Chelsea.

“I was surrounded by good food of all cuisines from early age. But for dinner at both grandparents house, great Filipino classics like my Lolo’s “Adobo” and my Tita Paz’s “Menudo” would always be served.

Because Argones was not born in the Philippines, his every trip to the country feels like a new experience. He has seen Makati’s vibrant and colorful nightlife and loved it. He got to know members of his clan and felt very much at home right away. He makes it a point to spend quality time with them whenever he is home.

When he last visited the Philippines, Argones marveled at the simplicity of life in Camotes, his girl friend’s hometown in Cebu. “There is beauty wherever you go and that is what I love most about the Philippines,” he says.

He hopes to have a successful business of his own in ten years, not just a barbershop, but also a globally recognized brand, promoting a lifestyle for young gentlemen around the world.

Before Champs, Argones was a DJ for his uncle’s “Signature Sounds”, a UK-based Filipino-owned company. He started by following him around, helping set up the audio systems till they wrapped up and finished the day’s work. 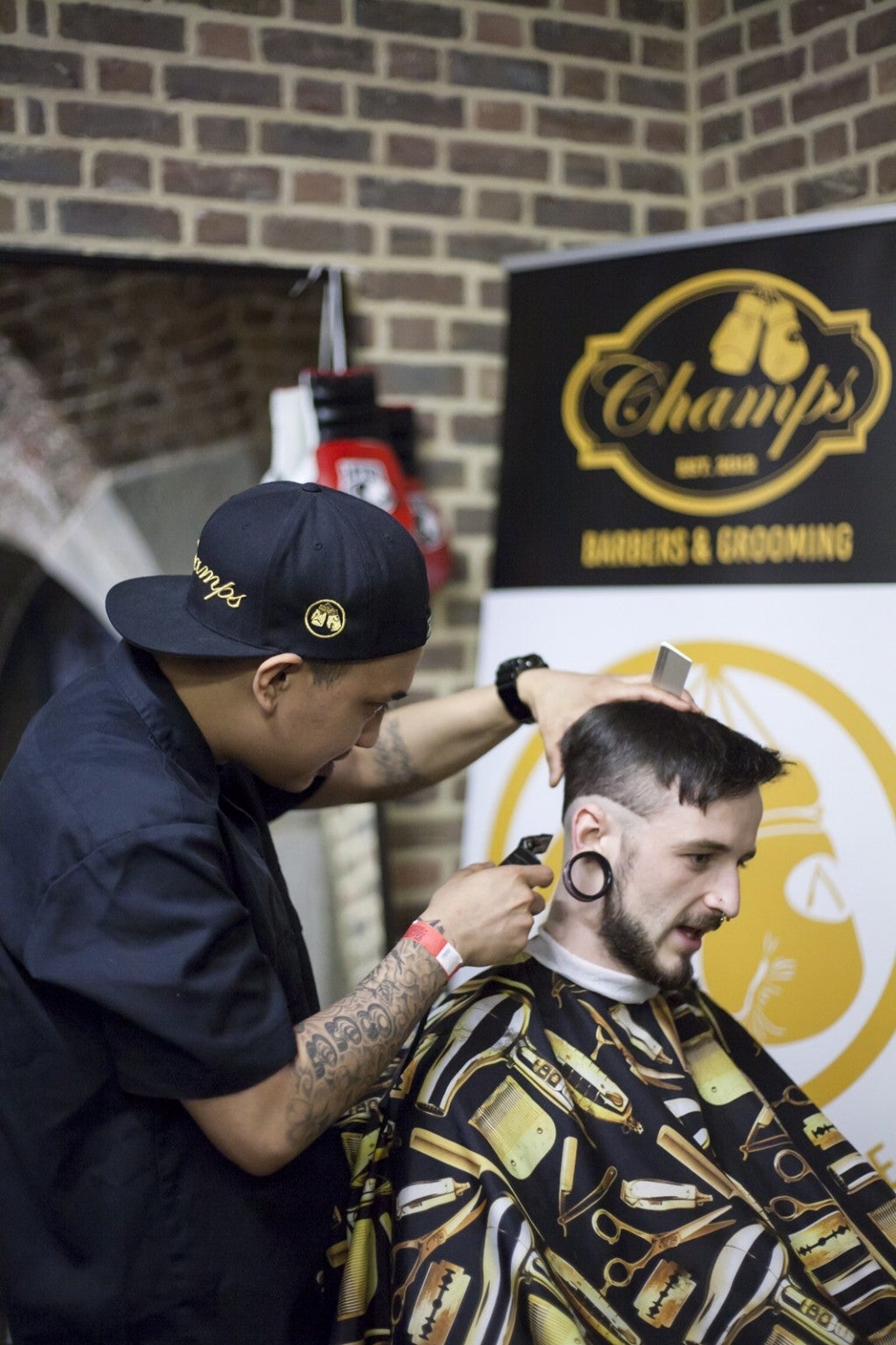 Argones grew up in Queens Crescent, Kentish town, “a rough area to grow up in,” he says. Here, he would often hear altercations but his family adapted well with the multi-ethnic community, and he, lucky enough to have friends who’ve kept him out of trouble.

Apart from that UK is a place where culture is celebrated, Argones says. “It makes my being a Filipino even more special,” he adds.

Since becoming a barber, Argones has focused on providing for his family, avoiding reckless spending, able to live comfortably, even spoiling his family from time to time.

His opinion on Filipinos living in the UK is shared by many, like a gap between Filipinos his age, born and raised in the UK and those born back home. “I think lack of common social interests and the fact that most UK-born Filipinos are shy or unable to speak Tagalog creates a slight cultural barrier,” he says.

He observes that it does not necessarily create any negative tension or segregation. “Most Filipinos who meet in the UK always find some things in common like family traditions and food preferences,” he says.

Growing up in the UK and seeing the Philippines only occasionally has taught Argones many things. “I know of some people who are not as fortunate but still they find ways to be happy. That’s what I find so admirable with Filipinos and that teaches me not to take things for granted,” he says.

Words of advice he would give to Filipinos who would like to work in the UK: “It is a place full of many opportunities, where good character and work ethics are appreciated. Be honest, always strive to achieve the best of whatever you can do and you’ll succeed.”