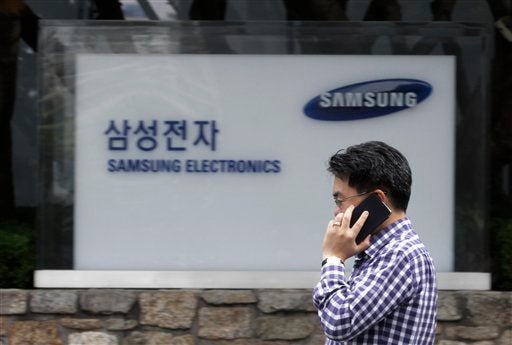 The firm’s flagship smartphone business is struggling against fierce competition, sandwiched between top-end rivals like Apple’s iPhone and lower-end devices from fast-growing Chinese outfits including Xiaomi.

Sales of the Galaxy S6—the latest edition of Samsung’s top-of-the-range handset, launched in April—failed to generate much excitement among consumers.

But brisk businesses in chips and displays has largely compensated for these difficulties, analysts said.

That is because as well as providing the chips for the company’s own handsets, Samsung’s semiconductor unit also makes the processors for a number of other companies—including Apple.

A recent weakening of the won—down 12 percent year-on-year against the dollar by the end of the third quarter—helped boost profits as most sales of semiconductors and display panels to emerging markets are settled in US dollars, he added.

“With sluggish sales of Galaxy S6… the (semiconductor and TV) businesses were a major factor behind the surprise earnings,” Lee said.

Third-quarter operating profit from the two business units are expected to increase by 500 billion won from the second quarter, said Choi Do-Yeon, an analyst at Kyobo Securities.

Overall, Samsung predicted an operating profit of around 7.3 trillion won for the July-September period, up from 4.1 trillion a year earlier.

The prediction beats the estimate of 6.7 trillion won given by analysts surveyed by Bloomberg News.

Sales for the third quarter are expected to reach 51 trillion won, up 7.5 percent from a year ago, the company said in a statement.

Wednesday’s estimate, which comes ahead of audited results to be released later this month, did not provide a net income figure or breakdown of divisional earnings.

As Samsung’s reliance on the chipmaking business grew, the firm in May began building a new $14.3 billion chip plant in Pyeongtaek, 65 kilometers (40 miles) south of Seoul.

This investment in the factory, which is to begin production in 2017, is the largest the firm has ever committed to a single plant.