A ringside view of how a CEO achieves results 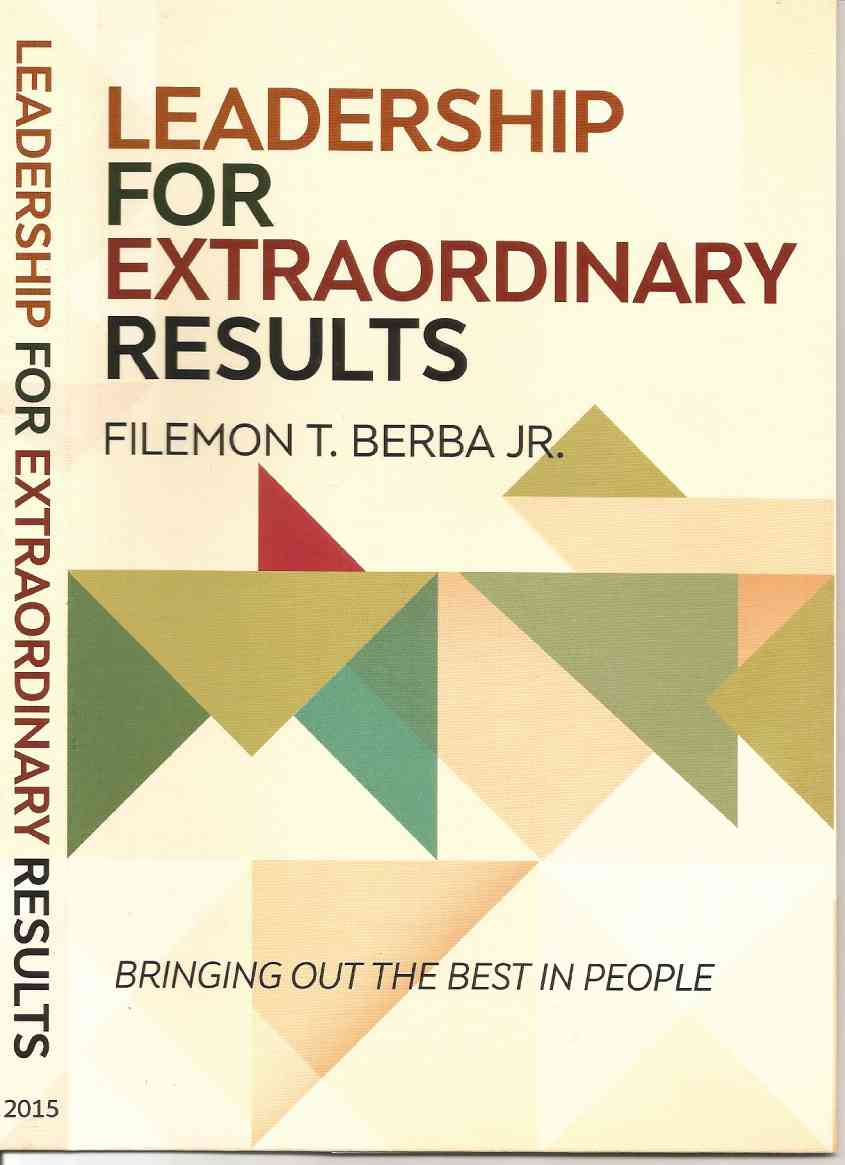 Often, authors of leadership books advance principles and strategies based on the experience of others. Not theirs. But we have no quarrel about that.

Celebrated leadership and management authors—like Peter Drucker, Tom Peters, Noel Tichy, Robert Slater and John Maxwell, to name a notable few —have given us valuable insights into leadership principles that work mostly in the corporate world—profit or nonprofit.

Even if their pieces are second-hand accounts, they have created a framework that logically and serendipitously assemble insights into the philosophy and science of business leaders down the checkered history of enterprises.

Two notable authors who wrote their own leadership books are Lee Kuan Yew of Singapore, “From Third World to First”; and Jovito Salonga of the Philippines, “Journey of Struggle and Hope.”

And here comes—from the Philippines, too—a truly non-fiction piece titled “Leadership for Extraordinary Results,” authored by Filemon T. Berba Jr. (There are autobiographical accounts which do not qualify as “nonfiction.)

The book is not exactly the author’s autobiography, since his focus is on his career as a technical man and CEO of some of the country’s leading companies.

The book may be slender— only 163 pages—but every chapter is filled with insights on “Asking the Right Questions,” “Introducing New ManagementTools,”  “Thinking Outside the Box,” “Humanizing the Workplace,” “Partnering with Labor Unions,” and “Leadership, Management, Technology—to mention a few of the 11 chapters in the book.

One unifying thread in all his leadership lessons, learnings and experiences is his  belief in his people’s capacity to transcend their so-called limitations and “give their best shot” to achieve goals set by both leader and follower. Thus his recurring theme of “making ordinary employees produce extraordinary results.”

The leader must have “the ability to make people happy to do what needs to be done together,” Berba points out,  “Effective leadership starts with understanding people and sharing with them the leader’s vision and plans for the future in a one-step communication.”

Surprisingly and refreshingly enough, for an engineer and an MBA graduate, Berba is not only an acknowledged master in numbers; he is an accomplished communicator, with a great command of the language—elegant English and homespun Tagalog that easily connect with people, using different strokes for different folks.

Berba graduated at the top of his Electrical Engineering class at the University of the Philippines Diliman, and also topped the Board examinations for electrical engineers.

Then he went abroad on a scholarship and finished his MBA at the Wharton School of the University of Pennsylvania.

Throughout the chapters, one senses the engineer’s precision and scientific approach, the business master’s management savvy and the communicator’s persuasive power.

In the book’s earlier chapter, Berba, a young engineer at General Electric in the Philippines, was confronted with a problem —a client was going to sue GE for 11 “defective substation transformers.”

Going back to electrical engineering basics, Berba says: “I made some measurements with voltmeters and made calculations with my slide rule. My calculations indicated that all the 11 transformers had distorted voltages on the secondary side.”

Young Engineer Berba instructed the company engineers to “reverse the connections” on the primary voltage side, after which all the voltages on the secondary side came out balanced.

“The problem was solved,” Berba says, savoring such a recollection.

On lateral thinking, as advanced by Edward de Bono, Berba says: “When we are stuck with a problem which conventional, typical or usual management action cannot solve, we may need to ‘think outside the box’—as long as we do not lose sight of our objective.”

The book relates many accounts, illustrating this kind of flexible thinking, coming up with what he says were “surprising, yet highly effective, solutions that we normally would not even consider.”

Primarily addressing engineers in the corporate world, Berba has this to say: “Engineers and technical people may be adept at technical and precise transmission of information, but they are hardly successful in communicating in a language easily understood by ordinary employees.”

Consistently, as the CEO of CEOs, Berba has used “lunches with the President,” visually attractive employee newspapers, and readable memos using the “Danver Principle” to connect to all levels in the organization. His memos were read first by a janitor named “Danver” before they were distributed to the entire work force.

The engineer and communicator is also a leader with true grit and determination—to clean up an initially graft-ridden firm, to win over a bully in a pipeline laying project in the countryside, and even to persuade militant union leaders to “reason together” with him at the negotiation table.

With his multidimensional approach to leadership challenges, Berba could be your consummate Renaissance man. In a pre-publication review, former Chief Justice Artemio Panganiban, Berba’s classmate in high school, calls him the “chief justice” of his engineering-management profession.

The book is visually appealing, and made more so with some pictures showing the young engineer, the rising executive—and now the leadership guru, relishing memories of associates in companies he worked for, in industry meetings—and in the comfort of home.

There is an unintended effect of this book: It shows work-life balance in pictures.

The author Berba has been in the midst of all leadership and management challenges throughout his career in the country’s top corporations. In this book, he treats us all to a ringside seat to see how he became the CEOs’ CEO. And, yes, among many more things, this book could be his valuable legacy to rising leaders in this country. [email protected]