“Tuwid na Daan” has indeed brought valuable benefits to our nation as a whole. But for farmers and fisherfolk, this is not enough. President Aquino has himself called for inclusive growth. Consider the table below: 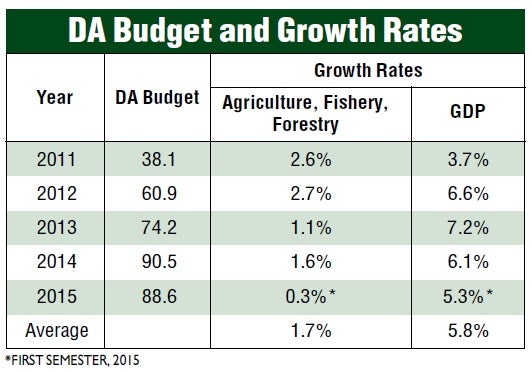 “Tuwid na Daan” must be supplemented with increased competence and transparency for farmers and fisherfolk if we are to attain inclusive growth.

We must credit Agriculture Secretary Proceso Alcala for having done much to address the “Tuwid” part of “Tuwid na Daan.” Surely, corruption still exists, but at a much lower level than those during the previous administration.

But for agriculture, the “Daan” part should also be addressed. This is what 200 stakeholders asked for through strategic and well researched commodity road maps.

In the Agriculture Fisheries 2025 (AF2025) Conference in February 2011, the Philippine Institute for Development Studies (PIDS), a think tank connected to the National Economic Development Authority, received 23 road maps from the Department of Trade and Industry (DTI), but not one from the DA.

It is especially dangerous to have no agriculture road maps at this time because of the Asean integration that starts in just three months. Before this administration ends, the DA should mobilize the agriculture stakeholders to finally formulate and implement these much-needed road maps.

A “Tuwid na Daan” should be supplemented with programs that will be implemented effectively. Many DA programs are praiseworthy. But it is poor implementation that makes many of them fail.

The DA personnel are highly qualified. But management systems are needed to utilize and synergize the good work that the DA can work toward a clear vision and strategic objectives.

The situation of the DA is not so different from the Philippine exporters’ dilemma when they had trouble selling their goods abroad. Thus, they had to get ISO 9000 so that foreign buyers would choose them over other national exporters who had this certification.

Unlike foreign importers, farmers and fisherfolk do not have the option to choose a department which will give them their needed support services. But just as importers required quality, so do agriculture stakeholders. While most DTI bureaus have ISO 9000, very few DA bureaus have such a system. It is noteworthy that in the first semester of this year, the DTI annual budget of P4 billion has resulted in a 5.8-percent industry growth rate, while the DA budget of P88 billion has resulted in only 0.3 percent growth.

This component is emphasized by PNoy’s statement “Ikaw ang boss ko.” The task of governance is too important to be left to the government alone. In both the creation of road maps and its effective implementation through management systems, the private sector must be involved.

In the law creating the PCAF, it was explicitly stated that farmers and fisherfolk should also help formulate and monitor DA budget use. During my five-day journey of looking at budget use in a region with a 10-person government-private sector team that crossed four provinces, I found that the DA budget was effectively used when the farmers and fisherfolk participated in budget formulation and implementation.

The Aquino government’s innovation in Bottoms-Up Budgeting (BUB) is an outstanding improvement. This is because the intended beneficiaries themselves helped formulate and implement the budget to suit their actual needs, instead of needs identified by some ill-informed or even unscrupulous government officials.

We documented projects that were located in the properties of LGU officials, even finding out that alleged fund disbursements were fictitious. Much of this could have been prevented if the DA projects were systematically made known to the PCAF local private sector members.

A DA order should mandate that private sector PCAF members should be informed of all DA funded projects. DA officials who do not comply with this should be suspended or terminated. The lack of budget transparency to the private sector beneficiaries is a major reason why the large DA budget has not produced the expected agriculture growth.

Before this administration ends, farmers and fisherfolk must see a significant improvement to the inadequate “Tuwid na Daan” they now experience. They deserve agriculture road maps, management systems and private sector participation and transparency. Without these elements, the “Tuwid na Daan” will not be enough to yield inclusive growth.

The author is chair of Agriwatch, former Secretary for Presidential Flagship Programs and Projects, and former Undersecretary for Agriculture, Trade and Industry. For inquiries and suggestions, e-mail [email protected] or telefax (02) 852-2112.