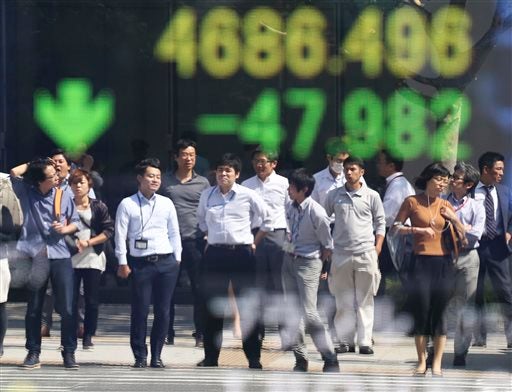 People are reflected on the electronic board of a securities firm in Tokyo, Monday, Sept. 28, 2015. Asian stocks were mostly lower Monday following Wall Street’s loss last week as investors looked ahead to Chinese and US economic data. AP PHOTO/KOJI SASAHARA

HONG KONG—Singapore entered a bear market as Asian stock markets slumped Monday on fears about faltering China growth and the prospect of higher US interest rates.

The benchmark Straits Times Index ended down 1.4 percent—at its lowest in over three years and down 21 percent from an April peak—after data showed profits at China’s industrial companies fell 8.8 percent year-on-year in August.

China is the largest trading partner for Singapore, a major trading center for commodities whose worldwide prices have slumped as Beijing’s economy slows.

Shanghai bucked the general Asian trend, staging a recovery after a morning sell-off and ending 0.27 percent higher despite the profits data.

Expectations of a US interest rate rise, which would hurt investment in Asian markets, were heightened by an uptick in US economic growth.

Dealers will closely watch the release of key US data this week, including employment, for a better idea of when the Federal Reserve will announce lift-off.

Thursday will also see the Bank of Japan release its Tankan survey of business confidence, with analysts forecasting a dip in reaction to China’s growth slowdown which has rattled global markets.

St Louis Fed chief James Bullard on Friday raised the prospect of a lift in US borrowing costs when he said he would “like to get going.”

On Friday the Commerce Department said the US economy grew 3.9 percent in April-June, up from the 3.7 percent originally stated, thanks to a boost in investment and consumer spending.

Attention will now turn to next Friday’s non-farm payrolls results, with a strong figure likely to reinforce calls for an early rate move.

On forex markets the dollar rose against most emerging currencies. The Malaysian ringgit lost 0.45 percent, Taiwan’s dollar shed 0.29 percent and the Thai baht was 0.31 percent lower. However, the Indian rupee and Indonesia’s ringgit edged up slightly from morning selling.

Koji Fukaya, the chief executive officer at FPG in Tokyo, told Bloomberg News: “US data this week is important and even if results are mixed, it won’t affect the baseline as the Fed made clear its intention to raise rates this year. The dollar is set to gain broadly.”

However, the greenback eased to 120.26 yen from 120.49 yen Friday as uncertainty on trading floors led investors into safe-haven assets.

On Wall Street Friday the Dow ended slightly higher but the S&P 500 and Nasdaq retreated.

However, Sydney added 1.42 percent by the end of the day.

Hong Kong, Seoul and Taipei were closed for public holidays.

The industrial profits figure was the latest data highlighting weakness in the Chinese economy after news last week that a gauge of factory activity in September had hit its lowest point in six-and-a-half years.

The growth slowdown in China, a key driver of the global economy, has fueled turmoil across world markets.

Chinese President Xi Jinping on Friday sought to shore up confidence in the world’s No. 2 economy, saying he was confident it would post “healthy” growth in the future.

He told a joint press conference with US President Barack Obama after White House talks that China had moved from “speed-based growth to quality-based growth.”

Chinese authorities are trying to rebalance the economy—which accounts for one out of every eight dollars of worldwide GDP—from one reliant on exports and government investment to one where domestic consumption is the main driver.

But alarm bells have rung over how rapidly the economy is slowing, and whether the so-called new model is expanding fast enough to take up the slack.—With Bloomberg News