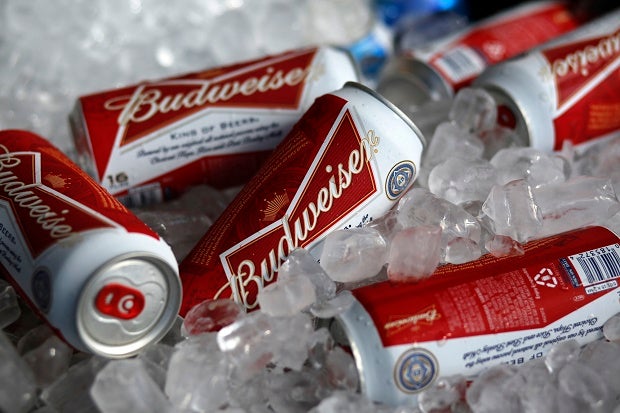 This is a Thursday, March 5, 2015 file photo of Budweiser beer for sale at a concession stand at McKechnie Field in Bradenton, Fla. The makers of Budweiser arent satisfied with owning the kings of beer. They want an empire global dominance on a massive scale. Anheuser-Busch InBev, the worlds biggest brewer, on Wednesday Sept 16, 2015, announced its desire to buy No. 2 SABMiller, creating a beermaker with annual sales of $73.3 billion, more than three times its closest rival, Heineken Holding. AP Photo

LONDON, United Kingdom—The makers of Budweiser aren’t satisfied with being the kings of beer. They want an empire.

The deal would create a multinational behemoth valued at around $275 billion with annual sales of $73.3 billion, more than three times its closest rival, Heineken.

AB InBev already claims six of the world’s most valuable beer brands, which besides Budweiser include Corona, Stella Artois and Beck’s. Taking over Miller in the US would likely draw objections from regulators worried the deal might stifle competition and lead to higher prices for consumers.

But whereas a lot of the attention will focus on the best-known brands in the US and Europe, AB InBev’s sights are on other countries. As profits wane in the Americas, AB InBev wants to expand into Africa.

Enticingly, SABMiller has a huge presence in Africa, the next beer frontier.

“The days of big profits in the US are gone,” said Jonny Forsyth, a global drinks analyst for Mintel, the market research firm. “They have to position themselves in the big beer growth market for the next 10 years.”

Shares of SABMiller rocketed about 20 percent higher on news of the approach, pushing its market value to around $90 billion. Shares of AB InBev rose 6 percent.

The companies are being pushed into consolidation by eroding market share and competition, ironically, by the little guy. Craft beers now make up 11 percent in volume in the US market, Mintel said.

AB InBev and SABMiller are themselves products of this consolidation trend. In every way, they are thinking big.

“We are driven by our passion to create a company that can stand the test of time and create value for our shareholders, not only for the next 10 or 20 years but for the next 100 years,” Anheuser-Busch InBev CEO Carlos Brito and chairman Kees J. Storm wrote in a letter to shareholders. “Our mindset is truly long term.”

But Africa, where home brew still dominates, offers a chance to grow. And that’s where SABMiller— the one-time South African industrial conglomerate — offers a foothold.

The former South African Breweries expanded in the early 1990s when Nelson Mandela’s release from prison led to a lifting of sanctions on South Africa and allowed the company to expand abroad.

Though the European beer market was dominated by the likes of Guinness and Heineken, SAB took advantage of the opening offered by the fall of the Berlin Wall to sweep into Eastern Europe and buy brewers on the cheap. Its expansion also stretched to other African countries including Mozambique, and to Asia.

The company bought Czech brewer Plzensky Prazdroj, maker of Pilsner Urquell, in 1999, US-based Miller Brewing Co. in 2002 and Foster’s of Australia in 2011. Today the company employs about 69,000 people in more than 80 countries, from Australia to Zambia, Colombia and the Czech Republic.

AB InBev is likewise the product of many mergers. Its current form emerged from a 2008 takeover of US icon Anheuser Busch Cos. by Brazilian-Belgian brewer InBev. The company has operations in 25 countries and makes more than 200 beers.

SABMiller, now based in London, said Wednesday that it “will review and respond as appropriate to any proposal which might be made.”

Under UK takeover rules, AB InBev has until 5 p.m. on Oct. 14 to make an offer for SABMiller or walk away.

In the case of a deal, the sheer size of the combined company is expected to push regulators to require the sale of some brands to ensure fair competition. That could be the case for Miller in the US.

“Anytime you have the No. 1 and No. 2 merging, it’s going to be looked at closely,” said Erik Gordon, a professor at the University of Michigan’s Ross School of Business who studies antitrust issues.