50-year-old Romana to get more bites 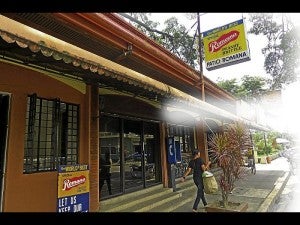 FOR over four decades Romana goods were only available in Baguio but for the past four years they were available in other supermarkets.

MANGALDAN, Pangasinan – Romana Peanut Brittle drew Metro Manila’s attention as a popular souvenir item, which becomes available to tourists only when they motor up to Baguio City or to this town where it has been manufactured since 1958.

But for the last four years, the Romana brand has been available in major supermarkets and malls nationwide.

“The family management is concentrating on marketing our product in supermarkets since we penetrated [mainstream outlets] in 2007,” says Rafael de Vera, Romana Peanut Brittle general manager.

Rafael is the ninth child of Romana de Vera, the woman behind the enterprise and from whom the brand name was used.

SM and Robinsons malls have offered their company to open a Romana Peanut Butter shop, “but everything is still under negotiation,” Rafael says.

That’s the Cinderella ending to a homegrown label.

“The procedure in making the peanut brittle when I started this business is still the same today; only the formula is developed so that it is better than before,” Romana says.

But the family business uses peanuts imported from China, a foreign brand of butter, and Luisita refined white sugar.

“We don’t use margarine. We don’t use ordinary sugar. Almost all of our ingredients are imported,” Rafael says. 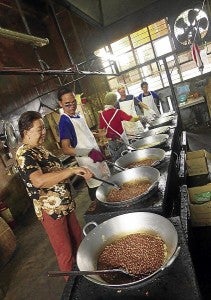 “THE procedure in making the peanut brittle when I started this business is still the same today; only the formula is developed so that it is better than before,” Romana says.

Says Romana: “If prices of ingredients increase, then we also increase the price of our product. We do not believe in lessening our product’s quality by using cheaper ingredients. If that was the case then we wouldn’t be where we are now.”

Rafael adds: “As much as we would like to use Philippine-grown peanuts, they are wrinkled and small in size, and producers cannot provide us steady stocks for our all-year round production.”

Besides, he says, peanuts from China have consistent sizes and are a lot cheaper.

Romana says she was once compelled to improve her formula after a former worker leaked her recipe and manufacturing system to other peanut brittle makers in Baguio.

“But people know the difference and they still buy our product so that means something, and I am glad,” she says.

That contract ended after the World Trade Center attacks.

But Rafael says his family plans to expand the distribution of Romana products in the US, China and Singapore. “We will target Filipino communities abroad,” he says.

Next month, the Department of Trade and Industry will initiate a trade mission to the US, and the De Vera family hopes to join that group.

Right now, the family has two peanut brittle factories in Barangay Guiguilonen here. A third factory, which is dedicated to other family products, is being supervised by Silvana, Romana’s third child. 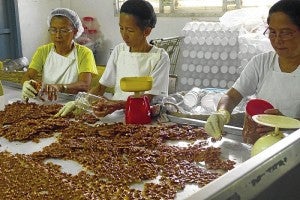 In 2006, they also put up a bottle factory for the packaging of Romana Peanut Brittle.

Despite their business growth, Rafael admits that unfriendly weather conditions in the country greatly affect their production.

“When Pangasinan was submerged by floodwaters when Typhoon ‘Pepeng’ struck in 2009, we lost more than P4 million in product sales and equipment. We had to spend more to restore our factory, buy new equipment, and put everything back in order,” Rafael says.

They employ 28 workers, mostly relatives who have been working for them since the 1960s.

At 78, Romana still supervises the business, alongside Rafael. Her husband, Federico, died 20 years ago.

Three of Romana’s other children hold positions in the family business. Maria Isabel, the eighth, is in charge of their canteen and water refilling station here. Paz Maria, the seventh, is the marketing manager based in Manila. Pilar Romana, the sixth, works as an auditor.