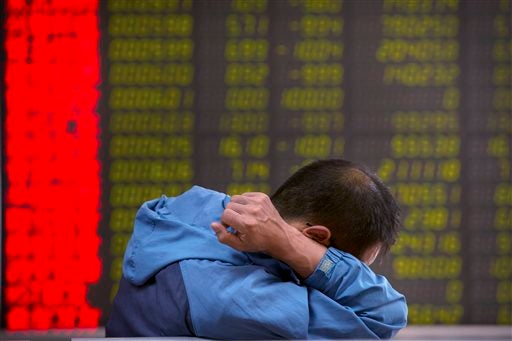 A three percent drop in stocks on Wall Street wound up the dismal day for investors, who dumped shares of the largest, most blue-chip banks and tech companies and headed for safety in bonds.

The spark for the day’s rout came from fresh official data that showed industrial activity in China stalling.

The official purchasing managers’ index (PMI) for manufacturing activity came in at 49.7 last month, its lowest for three years and indicating a contraction in factory activity.

That added to the concern over the health of China’s economy — the world’s second-largest — and how its slowdown would affect the rest of the world.

Adding her voice to private sector economists that have already cut their world growth estimates, International Monetary Fund managing director Christine Lagarde said growth would likely be weaker than the 3.3 percent estimate the IMF made just two months ago.

Speaking in Indonesia, she warned that emerging economies “need to be vigilant to handle potential spillovers from China’s slowdown and tightening of global financial conditions.”

And a US Treasury official said Washington’s key focus in the meeting of G20 economy chiefs in Ankara later this week would be to press for action to boost global demand, and to urge Beijing authorities to better communicate their policies for shoring up the economy and markets.

Shanghai stocks lost 1.23 percent and Hong Kong shed 2.24 percent after the release in China of the official PMI figures.

Tokyo was rocked more heavily, losing 3.84 percent, feeding into losses in Europe that hit 3.03 percent in London, 2.38 percent in Frankfurt and 2.40 percent in Paris.

Across the Atlantic, the S&P 500 gave up 2.96 percent and the Dow slightly less.

“Equity markets (are) starting the new month in the red after yet more disappointing China manufacturing data increases concerns about (the) slowing of the world’s number two economy,” said analyst Mike van Dulken at Accendo Markets.

“The market is in a situation where it can only see reasons to fall. We are adapting to a world where economic growth is going to be slower than believed in recent months, because of the hit from China and the emerging economies,” said Gregori Volokhine of Meeschaert Financial Services.

The Chinese data spilled over into oil markets, which reversed course and saw prices fall in London by 8.5 percent after three straight gains.

“The (Chinese) manufacturing index still shows that the economy is in the process of seeking a bottom,” said Wu Kan, a Shanghai-based fund manager at JK Life Insurance.

“The slowdown in China will weigh on German manufacturers, despite strong domestic growth and solid demand in the US and the UK,” he said in a client note.

“It is unrealistic to expect a complete decoupling, given the strong Chinese contribution to global GDP growth.”

Some analysts were not so pessimistic.

“We don’t think the readings are cause for alarm. For a start, China’s economy is increasingly driven by service sector activity, which still appears healthy. As such, signs of weakness in manufacturing are less of a concern than they used to be,” said Chang Liu at research firm Capital Economics.

Read Next
PH stocks reverse early gains, close lower
EDITORS' PICK
SM continues to send relief assistance to remote towns in Batangas
‘A greener, cleaner tomorrow’: A how-to guide for Filipinos who want to help with today’s energy crisis
China expands lockdowns to 25M people to halt viral outbreak
5-year-old Chinese boy in Cebu tests negative for novel coronavirus
DOH: Second person ‘under investigation’ for 2019-nCoV in Tacloban City
Get exciting deals and discounts when you download the new McDonald’s App
MOST READ
Dina Bonnevie on Coney Reyes: We have forgiven each other
172 Chinese tourists arrive in Bohol
Philippines orders 12 helicopters from Russia—Duterte
Duterte: China, Russia have respect for PH sovereignty
Don't miss out on the latest news and information.