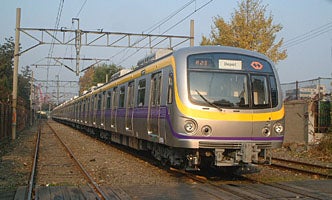 A consumers’ group called on Malacañang on Monday to void an allegedly anomalous P1-billion contract entered into by the Department of Transportation and Communications for the maintenance of the Light Rail Transit 2 (LRT-2) system, which runs between Recto Avenue in Manila and Santolan in Pasig City.

The National Coalition of Filipino Consumers (NCFC), through its lawyer and spokesman Oliver San Antonio, said the Office of the Ombudsman was investigating the DOTC’s contract with the Busan-EDC joint venture but Transport Secretary Joseph Abaya and Light Rail Transit Authority administrator Honorito Chaneco appeared poised to push through with the deal.

In its complaint with the Ombudsman filed in July, the NCFC said the DOTC’s engineers found that Busan-EDC had submitted technically incompatible specifications and had merely “cut and paste” the specifications from the Metro Rail Transit 3 (MRT-3) system, which runs on Edsa.

A technical working group report submitted on May 25 also found 12 “non-responsive” bid offers by Busan-EDC that were related to lax maintenance schedules as well as incompatible signaling and running systems, the NCFC said.

Despite the findings, the LRTA bids and awards committee under Jose Belarmino claimed the joint venture’s proposal was “advantageous to the government,” the group said.

Aside from Chaneco and Belarmino, the NCFC also filed graft and administrative charges in the Ombudsman against nine other BAC members for allegedly violating published bid rules repeatedly and illegally favoring the Busan-EDC joint venture.

Busan-EDC spokesman Charles Mercado earlier said it was open to investigation on claims of irregularity. He accused the NCFC of violating the confidentiality clauses of the bidding regulations by disclosing the technical aspects of Busan-EDC’s offer.

Mercado opined the joint venture and the BAC were being harassed “because the offer frustrated some quarters’ expectations and belief that the deal was in the bag for them.” He said NCFC’s allegations were “farthest from the truth” and part of a demolition job intended to discredit Busan-EDC.

The Ombudsman has given due course to NCFC’s complaint and has directed the BAC members to answer the charges.

“We need swift and concrete government action. The DOTC secretary and the President need to directly intervene to clean this bidding mess up, and they should do it now without further delay,” San Antonio said.

He recalled that President Aquino had said in 2013 that he and Abaya were “ready to be run over by a train” if the rail system’s construction and maintenance deadlines were not met in two years.

“Tourists are falling into holes in our international airport, Metro Manila traffic takes forever to move—this is the sad state of transport in the country. Our metro rail system is a good transport alternative. The commuting public should be vigilant in protecting it against more corruption and inefficiency,” the NCFC lawyer said.