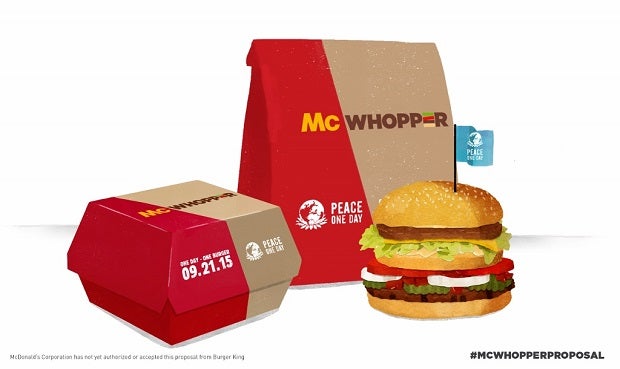 This photo provided by Burger King shows a McWhopper. In full-page newspaper ads Wednesday, Aug. 26, 2015, Burger King said its calling for a truce with McDonalds so that they can create a mashup of their most famous burgers, the Big Mac and the Whopper. Burger King is tying the publicity stunt to a nonprofit called Peace One Day, which says it promotes Peace Day. AP

WASHINGTON, United States—Is a McWhopper in the near future for fast-food lovers?

In the name of global peace, Burger King proposed making the hybrid hamburger to its rival McDonald’s on Wednesday, at least for one day, the United Nations-promoted International Day of Peace on September 21.

Burger King, perpetually locked in tough competition with the larger but less profitable McDonald’s, delivered the olive branch via a full-page advertisement in The New York Times, saying it is time to “call a ceasefire on these so-called burger wars.”

Burger King said that joining hands to make a combined version of its menu-topping Whopper burger and McDonald’s icon, the Big Mac, would be a “powerful rallying call” in support of Peace One Day.

The United Nations has promoted September 21 as global Peace Day since 1981, and Burger King said its move was part of a campaign by an activist coalition, Peace One Day, to make it a day of ceasefire, non-violence and global unity.

“They have a powerful rallying call—’Who will you make peace with?’—which has inspired us to lead by example and extend an olive branch of our own,” Burger King said in the ad.

It said the McWhopper would be developed and cooked together, though in only one location, with the proceeds benefiting Peace One Day.

“All we need from you is a few McDonald’s crew members to help combine the ingredients with ours.”

McDonald’s, in a Facebook reply, called the proposal a “great idea” but did not immediately agree. Instead, it said the two brands “could do something bigger to make a difference” while saying that the “friendly business competition” between the two is not the same as “the real pain and suffering of war.”

Behind the scene in the campaign is some of the financial power of Burger King’s part-owner, Berkshire Hathaway head Warren Buffett.

Peace One Day is strongly backed by the charitable foundation of the tycoon’s son Howard Buffett, who is a director of Berkshire Hathaway and possible successor to his father as chairman.