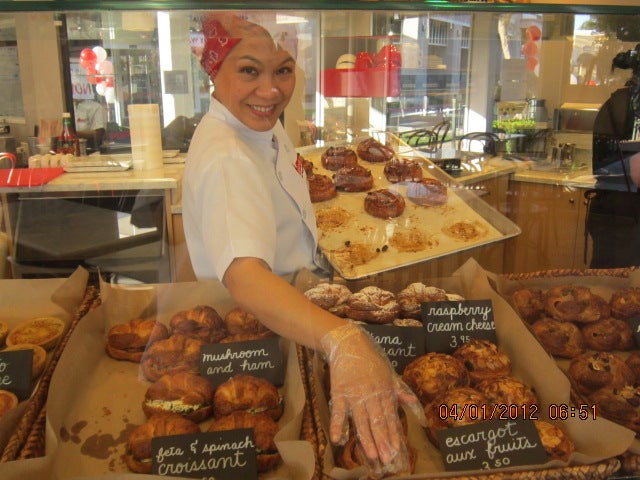 Bring a good book. Sit outside. Enjoy a flavorful cup of coffee. Bite into real croissant and house-made mango brulee pie. Pretend that you are in some Paris street. Welcome to L’Amande, Beverly Hills.

When Ana Santos and her Portuguese husband Goncalo Moitinho de Almeida were operating Le Coeur de France in Manila a few years back, they would hear comments like ‘they only succeeded because they well understood Filipino lifestyle.’

That lingered on and became a nagging challenge. To be able to show the world that they could be competitive overseas, the two put up another venture, L’Amande, a French bakery and pastry shop in the uptown side of California.

For Ana, it was always something she wanted to validate, that she was skilled high enough to succeed in a world-class location and make a mark for herself.

Having been educated in one of the world’s best culinary schools (Lausanne, Switzerland), Ana learned how to speak and write French fluently (Ecole Mont Olivet), learned business management (Ecole Lemania) and graduated with honors in Hotel and Restaurant Management, majoring in Food and Beverage at the prestigious Glion Institute of Higher Education.

By launching a pet project outside of the Philippines, she thought it would be another feather on her cap. Indeed, she did and it became an overwhelming success.

Why another bakery and a French name? “It is our passion. My husband and I really specialize in bakery operations. The French are also reputed to make some of the best loaves of bread and pastries, hence, our decision to go that way,” Ana says.

Ana and her husband moved to Los Angeles in 2009, hoping to start a similar concept that had a successful run in Manila.

They’ve always dreamt of establishing a bakery from scratch and with L’Amande, that dream of serving only the finest French bread and pastry delights, would finally come to reality.

It took them about a year to have everything ready, from logo and store designs to menu items and food costings.

Initially, businessmen found their project interesting but most of them were already bound by exclusivity contracts to Starbucks, Coffee Bean and Tea Leaf, Wholefoods, and the like. They had something good, but could not find the location for it.

When they were about to give up, a friend recommended that they see a landlord looking for exactly what they had. They got the deal in no time and would sign a contract with Rolling Hills Plaza, coincidentally and conveniently located near their home.

Ana immediately contacted her former employees back in the Philippines, the ones who expressed their desire to go with them when they sold Le Coeur de France in 2008. Generous to a fault, Ana had promised that she would not abandon them and include them in her plans. 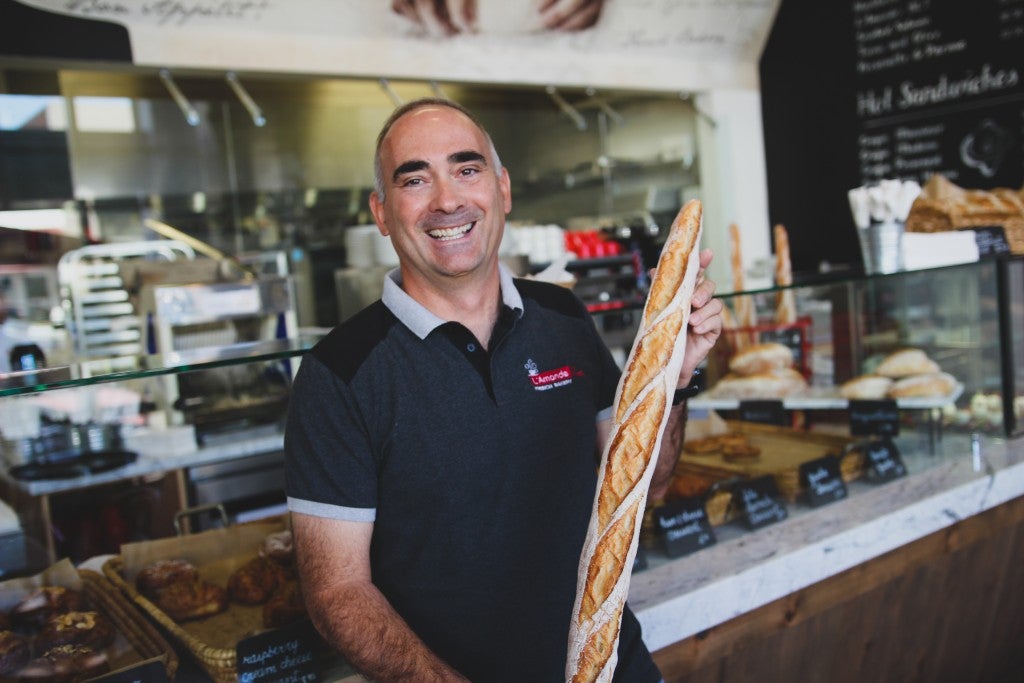 Ana and Goncalo proceeded working on their investor’s visa documents, and in parallel, prepared for the employees’ petitions, a backbreaking work due to the amount of requirements needed to bring them in.

She ploughed on nevertheless, despite 9 out of 10 of them did not have college diplomas. She also sent them money for medical, dental and family upkeep, all of them looking forward to a bright tomorrow.

L’Amande opened in Torrance on April 2012, and its success was unexpected. “We would run out of products from 1pm and had lines out the door, all the way to the parking lot. It was really incredible but also overwhelming,” Ana recalls.

Ana had a staff of about 25 people then but soon realized that if the business were to cope with the market, she had to train more people and perhaps, find another place for production.

As a follow through with the strong demand, L’Amande opened another store in Beverly Hills in July 2014 with ten Filipino employees. It had planned to open more stores due to inquiries about franchises and possibly, a commissary similar to what it had in Manila.

Customers loved the place, the vibe, products and innovative spirit the husband and wife nurtured. Quite a number of customers even sent unsolicited notes and letters giving them heartwarming feedback.

Over the span of three years, L’Amande offered weekend specials that were repeated only twice a year. This meant hundreds of new and exciting products customers could enjoy.

On the menu were spiced pear tart (with cinnamon, nutmeg and black pepper), salted caramel napoleon, wild cherry crispy pie (cherries from Italy), apricot cream cheese croissants, blue cheese and pear quiche, and other products that were never seen or tested before.

The husband and wife team leads by example. “We do not go to the bakery everyday or spend all hours there, but when we are there, we always make sure we work with the team,” Ana says.

Down-to-earth, hardworking and practical, Ana does some baking chores herself. You can see her roll her sleeves to prepare the dough, fold butter into each of them until they become delectable croissants. You can catch her peeling apples for her menu or doing hundreds of things in the kitchen.

“It is something that we really enjoy. We love serving customers, talking about the food we serve, and basically, to ensure that everything is according to the standards we’ve set,” she says.

Asked what is it like managing a business overseas and managing a business in the Philippines, Ana says that aside from the difference in laws concerning compliances, it is very similar. She says, the same degree of professionalism and dedication are required.

Market acceptance for L’Amande has been over and above expectations according to her. People always looked forward to the quality of food they’ve brought to the neighborhood.

Unlike Starbucks, L’Amande is a unique, quaint place with a warm and accommodating feel. It has a European coffee shop ambiance, no laptops, very few meetings, and people stayed as long as they wanted to. 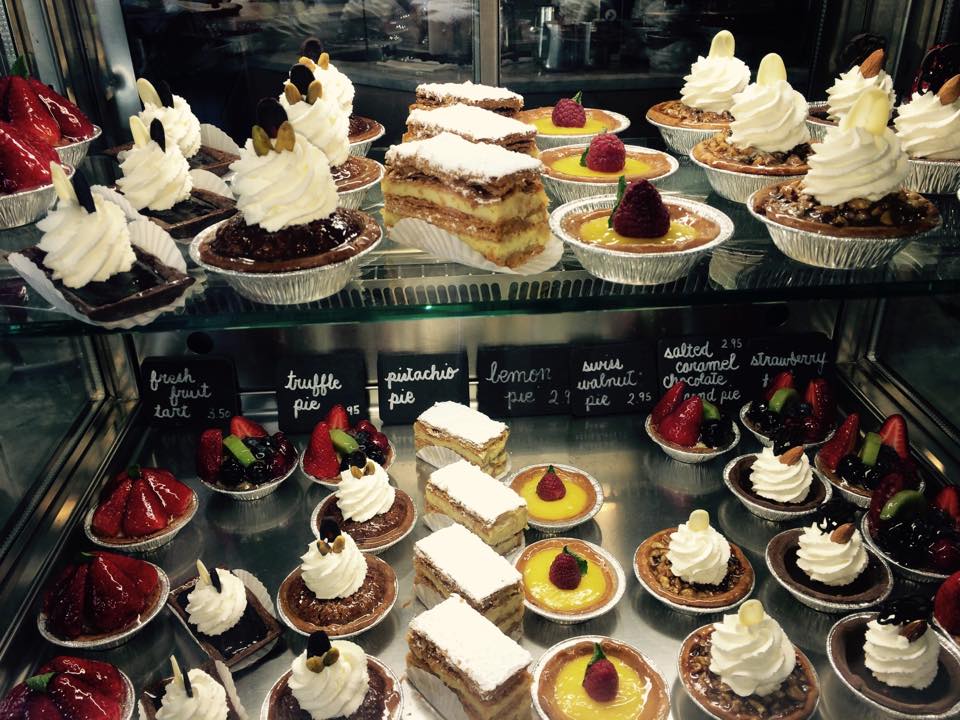 Ana is most proud when she would see the plates come back empty. “For me, it’s the biggest testimony that the meal was a success. I often tell the team that although we make hundreds of meals a day, a customer, he or she, gets only one. Because of this, each and every plate has to be an expression of what we do best. Every customer has to be delighted. This philosophy has worked wonders for us,” she says.

Ana was born and lived most of her childhood in Manila. She went to school in St. Scholasticas’ College and right after that, left for Switzerland to attend three schools where she met her husband who also graduated from the same course she took.

After graduation, they went their separate ways, Goncalo to Europe to join a consulting group, and Ana to Asia (Bangkok and Manila) to work with different hotels.

They decided to get married in 1988 after a year of trying to find employment in a place where they could be together. They then moved to Sydney and stayed for four years then lived in Singapore when a French company hired Goncalo.

They moved back to Manila in 1994 to start their own Le Coeur de France, operating it until 2008, when they sold to the Pancake House International Group.

Describing herself as strict, disciplined and determined, Ana never required anything from anyone that she herself has not done before. This includes tasks from dishwashing to baking and serving.

“I feel that it is the only way to understand job requirements and the best way to motivate staff. I try to show my staff that I do difficult jobs with pleasure and always with pride. That way, no matter how basic, every team member can feel good about his/her contribution to the enterprise,” she says.

In Manila, the two were very compliant to local Labor laws and even regularized rank-and-file employees when other restaurant operators made cost-cutting measures and employed contractual workers.  Ana would bring lunch to the office many times. She and Goncalo would often host dinners and lunches for employees, welcoming them in their home like their extended family. When an employee’s mother was confined nine years ago, Goncalo lined up at the hospital to donate blood. 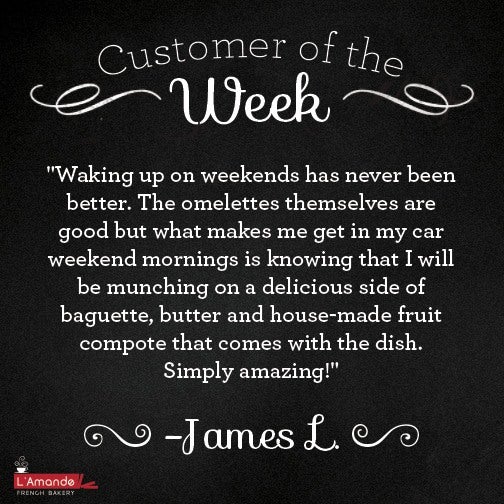 What would she advise Filipinos who want to set up a similar business in the US?

“I would tell anyone to study the laws well before diving into a business. It would also invaluable to set a reasonable budget to hire the right professionals from the beginning, to make sure that the business is on solid ground. I would also encourage people to study the market extensively, not to take things for granted and if possible to test it before investing huge amounts,” she says.

Not everything is rosy for Ana and Goncalo though. Like in any successful business, they too, had to contend with the ugly side. Embroiled in a labor dispute with the very people they’ve helped and treated like members of their own family, it is disheartening to know that they want to bring them down.

Has crab mentality creeped in? Obviously. Disgruntled people want to discredit them and have even resorted to fabricating stories, manipulating truths and spawned other tales from the crypt.

But just this week, the couple received a favorable judgement from the courts – the judge/magistrate issued an order denying plaintiffs’ motion for a right to attach their home despite their very aggressive efforts.

The court has also found that each of the 11 plaintiffs made “no reference to any documentary evidence corroborating their generalized estimates of their hours worked”. Furthermore, the “defendants have offered rebuttal evidence”.

With the couple’s entrepreneurial and undying spirit, they can weather the storm and bake another success, one that is just as wonderful as their bread and pastry masterpieces. Roger Pe/Inquirer Business Features