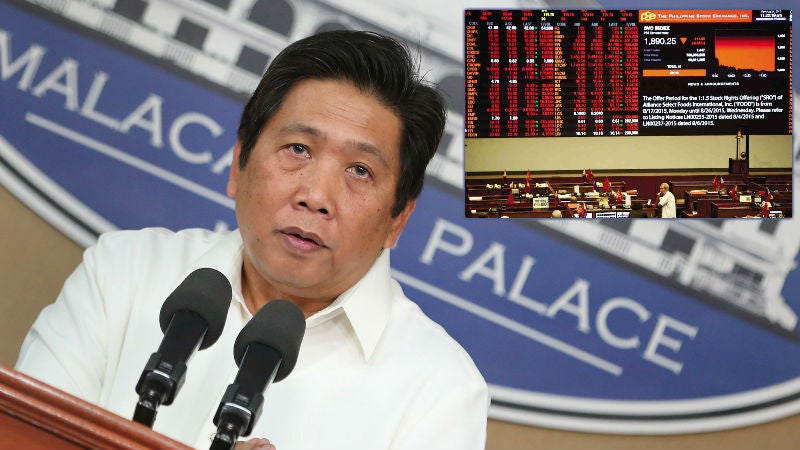 Malacañang on Tuesday said that there was “no need for aggressive (government) intervention” at this point even as an American think tank asserted that fears over the health of China’s economy, which triggered a global sell-off among investor earlier this week, seemed to be “overblown.”

“Moreover, the market maximized the Philippines’ sound economic environment and deep-seated improvements in the last five years, which are now protecting the economy from external shocks,” he said in a press briefing.

Other data points suggest that economic reforms were bearing fruit, according to the think tank.

Following a report that pointed to dim prospects for China’s massive manufacturing sector, global financial markets plunged on Monday. Philippine assets were not spared, with the main equity index falling by over 6.7 percent, erasing gains made since the start of the year.

In the foreign exchange market, the peso dipped to its lowest level in five years on Monday.

The peso regained lost ground on Tuesday while the local stock market avoided slipping into “bear” territory as selective bargain-hunting allowed the main barometer to stabilize alongside improved sentiment in the region.

The Bangko Sentral ng Pilipinas (BSP) pronouncement that it was ready to provide extra liquidity to the economy to keep the peso stable.

The Philippine Stock Exchange index (PSEi) firmed up by 39.33 points, or

0.58 percent, to close at 6,830.34 during a session when trading hours were shortened by a lengthy trading disruption, the third time since last week that the market was halted due to a technical glitch. Trading was halted at 10:02 a.m. and resumed trading at 2:55 p.m.

The market managed to rebound as the US Dow Jones future suggested a potential rebound while European and other Asian markets likewise firmed up on Tuesday, Cruz said.

On the other hand, the stock market rout continued in China. The Shanghai composite index fell by 7.63 percent. Japan’s Nikkei 225 was likewise down by 3.96 percent.

“The market is still selective because the confidence of the market has continued to weaken after the recent sell-off,” Cruz said, adding that investors would take their cue from how US markets would actually perform vis-à-vis expectations of a rebound.

But even if the second-quarter GDP growth figure would exceed expectations, Cruz said the positive impact would likely be short-lived. “It will just be knee-jerk reaction but it won’t provide a sustainable relief for Philippine equities because what we are looking at right now is what is happening to China and US markets.”

He said the PSEi would likely find support at 6,550 while selling pressures would likely arise every time the local stock barometer would move closer to the 7,100 to 7,200 levels.

If the free fall had continued, a decline of 20 percent from the peak would have marked the entry into bear territory.

Luz Lorenzo, an economist at Maybank ATR Kim Eng Securities, said on the sidelines of Maybank Group’s Invest Asean (Association of Southeast Asian Nation) conference on Tuesday that Monday’s sell-off was overdone and that investors should eventually go back to getting guidance from macroeconomic fundamentals.

She is hoping that the second-quarter GDP would provide some cushion, expecting growth to come in at around 5.9 percent or better than the disappointing 5.2 percent growth in the first quarter.

Monday’s sell-off, Lorenzo said, had pared the valuation of the local stock market to around 18 times in terms of price to earnings (P/E) ratio compared with over 20 times in previous months.

“In terms of valuation, we’re still high compared to others but I always think that’s the premium for growth. I don’t think we should go down that much,” she said.

A P/E ratio is a measure on how much investors are willing to pay for each peso of a company’s earnings.

Investment banker Manuel Tordesillas, president of Maybank ATR Kim Eng Capital Partners Inc., said the market may be able to find more certainty by September, during which the US Federal Reserve may have decided whether to impose or defer an interest rate hike.

“Whether or not the Fed raises (interest rates), the certainty will bring more stability and that will create window again,” Tordesillas said.

All told, he said investors should go back to looking at macroeconomic fundamentals, in which case Asean would likely stand out. “This is the area for growth as far as the world is concerned,” he said.

Valentin Marinov, foreign exchange strategist at Credit Agricole CIB, said: “The latest sharp risk sell-off took many (including us) by surprise. Part of the problem seems to be that unlike recent bouts of risk aversion the latest was not triggered by the ‘usual suspects’—the Fed, the debt crisis in Europe or the fear of further sell-off in commodity prices—but by China,” Marinov said in a research note on Tuesday.

Given that the epicenter was China, Marinov said there was therefore little that the US Federal Open Market Committee, the European Central Bank or for that matter, the Bank of Japan or the Bank of England could do to lift the market risk sentiment.

Coloma noted that the downturn in global equities was to blame for the country’s woes. However, he said “our attention should be directed to the stability of our macroeconomic fundamentals.”

“Our economy has sufficient cash. We are not borrowing huge amounts. The interest rates of our short-term borrowings are low and still advantageous to us,” he told reporters.

He added, “We have enough financial strength and resiliency to address these events that come from outside the country.”

American think tank Capital Economics said weak data from China was rooted in Beijing’s decision to shift the Chinese economy away from investment-driven growth to a more sustainable model of relying on domestic consumption—a strategy that seems to be working.

“The debacle in China’s equity market tells us little directly about what is going on in China’s economy,” the firm said in a report to clients on Tuesday.

“The surge in prices that started a year ago was speculative, rather than driven by any improvement in fundamentals,” the company said.

“Other parts of the economy appear to be doing much better,” the firm said, citing leading indicators for China’s service sector, which is performing at its best in more than a year.

The recent pattern of weakness in China’s property construction and heavy industry set against the strength in services is a positive sign that rebalancing toward a more sustainable growth model is underway, the report said.