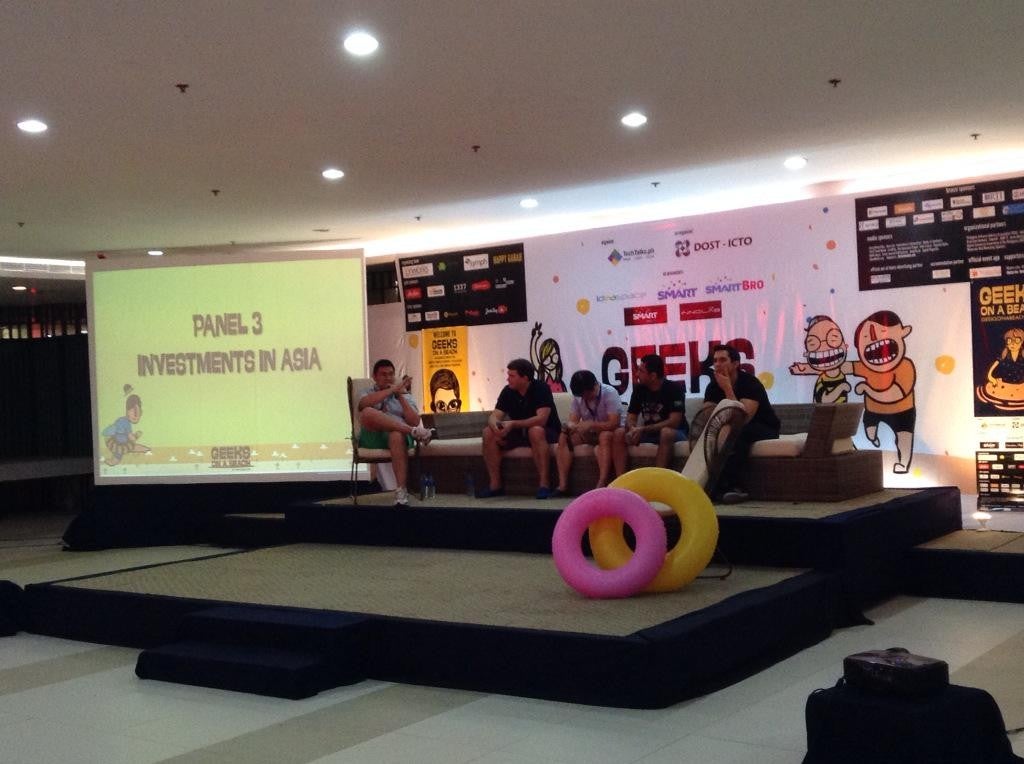 Panel discussion on investments in Asia during the 3rd Geeks on a Beach. YUJI GONZALES/INQUIRER.net

BORACAY, Philippines—The Southeast Asian region and the Philippines in particular are emerging markets in the global startup industry that may be worthy of investments in the future, according to industry leaders and foreign investors during the 3rd Geeks on a Beach conference here on Friday.

Frontier Ventures managing partner Dmitry Alimov said investors like him were looking into startup companies in markets where they could see the biggest possible opportunity for growth.

“Southeast Asia is a region where we saw reasonable valuation and huge market potential,” Alimov told Geeks on a Beach participants, majority of whom were delegates from local startups.

Monk’s Hill Ventures managing director Kuo Yi Lim said Southeast Asia’s direction as an emerging market could not go anywhere but up because almost everything was relatively “low and unpenetrated.”

“Southeast Asia is really one bright spot across the global scene. We see exciting, interesting opportunities in the next five years,” he added.

But Lim said the region had yet to reach a certain “point of maturity” before investors could shell out money for local startups with trust and confidence.

“We just have not seen a critical mass of exit yet but we are not saying that it’s not going to happen. Companies across Southeast Asia haven’t reached the point of maturity where acquisitions will start happening,” he said.

Meanwhile, Golden Gate Ventures principal Justin Hall said they usually considered local startups that initiate to reach out to and engage with external markets and foreign investors outside their region.

Hall added that foreign investors like him had been looking for startups with “aggressiveness” and ambition to expand.

“We’d like to invest in very aggressive founders. If you are in Southeast Asia, you got to expand to other markets. There needs to be a rollout. That’s a trait that we are still trying to find in Southeast Asia,” he said.

On promises and rejections

Noting that investors wanted to understand the decision-making skills of companies, Lim said budding startups should be careful in setting targets and making promises to avoid leaving a bad impression.

“If an entrepreneur sets a target, if they hit that target, most likely we will believe everything that they say after that no matter what. But if you say that you are going to meet the target and you don’t hit it, we will be very much cautious when it comes to believing what you say,” Lim said.

But he said missed targets and other failures can be converted into something positive by proper communication.

“If you actually communicate why it happened and what you learned from it, that’s a plus, you build a credibility with us. It doesn’t mean that you have to win every single battle,” he added.

Lim also said startups should not be disheartened by investment rejections and failed negotiations as these were necessary in building long-term relationships.

“One rejection is not a rejection forever. It’s a fine balance between building a relationship and getting an outcome from the conversation,” he said.

Hall urged young tech entrepreneurs not to take rejections personally, saying investors themselves get rejected, too.

“Biggest advice is to not take these things personally. Maintain relationships and make something out of it. We know it sucks too so let’s just try to be friendly and work together,” he said. RC

Formula to successful startups according to industry leaders