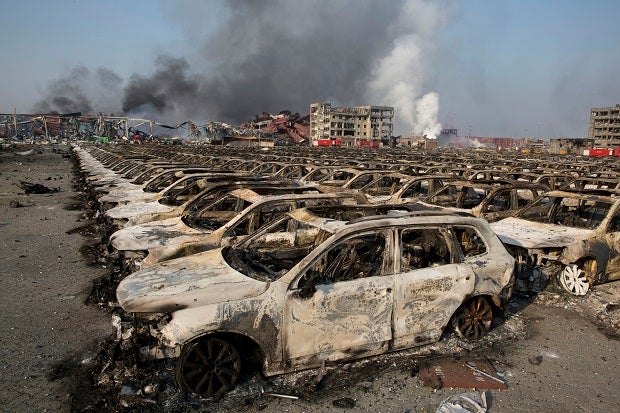 Smoke billows from the site of an explosion that reduced a parking lot filled with new cars to charred remains at a warehouse in northeastern China’s Tianjin municipality, on August 13, 2015. Huge, fiery blasts at a warehouse for hazardous chemicals killed many people and turned nearby buildings into skeletal shells in the key Chinese port. Shock waves from the blast at one of the world’s busiest port are expected to impact on China’s economy. AP

TIANJIN, China — With a swathe of one of the world’s busiest ports in ruins, more than a billion dollars in losses, and some major multinational firms still unable to access their premises, the economic impact of the Tianjin explosions could reverberate for months.

Last week’s blasts triggered a giant fireball and killed 114 people, sparking fears over toxic pollutants in the city’s air and water, though authorities have insisted both are safe.

They also devastated a large area of the port of Tianjin, a key gateway to the world’s second-largest economy and its biggest trader in goods.

Among the most striking images of the disaster have been those showing countless lines of imported cars burned to a crisp, with about 10,000 new vehicles near the blast site reportedly destroyed.

More than 150 companies in the Fortune 500 — the US magazine’s listing of the world’s biggest firms — have operations in the city, and its port is one of the 10 busiest globally.

The city has a population of 15 million people, almost twice that of London, and an economy roughly the size of the Czech Republic.

“Economic activity in Tianjin has yet to return to normal several days after the devastating explosions there,” Capital Economics, a research firm, said in a note to clients.

“While most of the port has remained in operation, damage to warehousing and factory facilities has been severe,” it added, warning that “disruption is likely to spread along supply chains”.

Some of the world’s biggest companies have had their operations in the area affected, including Japan’s Toyota, the number two global automaker.

Production at its plant in the area remained suspended Wednesday. Some 67 out of 12,000 employees at the factory, which produces models including the Corolla sedan, were injured.

Pharmaceutical giant GlaxoSmithKline also has a plant in the area around the blast site, and a spokeswoman told AFP that it had been unable to access it to assess the damage.

French carmaker Renault said Wednesday it was diverting its imports to Shanghai.

European aircraft manufacturer Airbus has a giant assembly plant in Tianjin, its only such facility in Asia and crucial to one of its most important markets.

Its staff were safe, it said, but it has offered to move employees to downtown Tianjin, away from the port area, and was analysing “the logistics situation”.

“We are trying to find solutions,” a spokesman added.

Soft drinks giant Coca-Cola and Japanese automaker Honda both told AFP they were evaluating the impact of the blasts.

In a statement, the American Chamber of Commerce in China said it anticipate that Tianjin authorities would “rapidly and transparently complete their assessments and investigations, rebuild the Tianjin port and brand, and restore trust in the city”.

According to the American Association of Port Authorities’ 2013 world ports rankings, the most recent available on its website, Tianjin ranked third globally for cargo volume on 477 million tonnes, and 10th for container traffic, with nearly 13 million twenty foot equivalent units.

Tianjin Port itself says that operations have returned to normal “except for those at the site or surrounding areas” — which could cover a significant section of the facilities. It did not respond to requests for details from AFP.

Shares in Tianjin Port Development Holdings tumbled more than 13 percent in Hong Kong on Monday — their biggest loss since 2009 — and were down 2.9 percent to HK$1.36 on Wednesday.

Losses in the auto sector alone were estimated at $310 million, according to the People’s Daily, the official mouthpiece of China’s ruling Communist Party, and the Fitch ratings agency has warned that insurance claims resulting from the explosions could amount to $1.5 billion.

Analysts say the long-term effect will depend on how long port operations are disrupted, with investment bank Nomura saying in a note that while it did not expect a “significant” impact on the economy, “The key issue is whether this area will be affected permanently or temporarily.”

Northern China faces “an immediate interruption in chemical and plastic supply” for up to a month, research firm IHS said.

“The port is responsible for the area covering Beijing and the surrounding area, so it’s very important,” said Tse Leung Yip, an associate professor at the International Centre for Maritime Studies at Hong Kong’s Polytechnic University.

“Ships could berth nearby, but it’s not very convenient, especially because Beijing really relies on Tianjin’s port.”