Formula to successful startup according to industry leaders 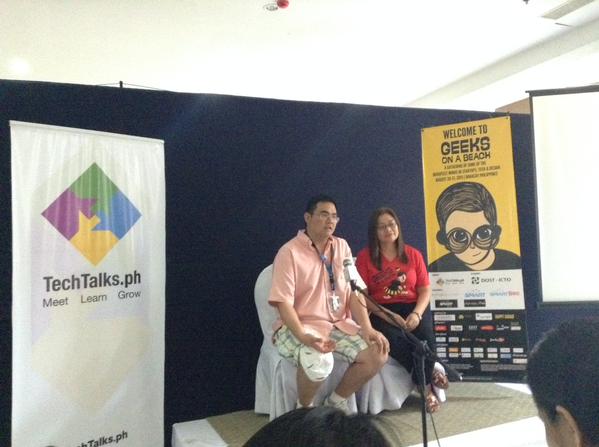 BORACAY, Philippines—Startup and technology conference “Geeks on a Beach 2015” (GOAB) has not officially started, but industry leaders did not fall short of sharing their knowledge on how to establish a successful startup here on Wednesday.

In a pre-conference press interview at the Crown Regency Resort, IdeaSpace founder and president Earl Valencia said there are three Hs are necessary in a startup environment—humility, hunger, and hospitality.

“We have to be hungry for opportunity, hungry to know why we want to share our own story. We have to be humble enough to learn from other people,” Valencia told reporters and bloggers.

Now on its third year, GOAB will gather delegates and speakers in the startup industry in a series of discussions, activities, and networking. Organizers said they were expecting to exceed last year’s attendance, which was set at around 500.

In this year’s edition of the conference, Valencia highlighted the role of other sectors, saying that the startup ecosystem would also need support from them in order to thrive.

GOAB is co-organized by the Department of Science and Technology.

“Actually this year is a banner year because all sectors are going to come together,” he said. “As much as I think that there are still a lot of stories to be made, we are trying to create an entire ecosystem here—from the academe, the government, and the private sector.”

TechTalks.ph founder Tina Amper, who noted that the idea of organizing a startup conference only started with an informal talk with friends and a “personal desire to share” knowledge, said GOAB had helped startups to meet investors in the past conferences.

“We facilitate action between people to people. It’s a destination conference and you have many opportunities to reach out to people, and people are generally more relaxed. We’re aiming for life long relationships, and that has happened,” she said.

But more than linking startups and potential investors, Amper said GOAB’s bigger goal was to help the Philippine economy by generating more jobs, especially for the youth.

“We want to help the young generation fulfill their potential by exposing them to best practices and some of the best leaders in the industry,” she added. “In this conference we are hoping that they would become more ambitious than they already are so they don’t have to leave the country.”

Noting that many beginners are usually afraid of failure, Smart Devnet chief developer Paul Pajo said startups should not hesitate to get to know their target customers better.

“In startup ecosystem, the more times you fail, the better you become because you are learning. Failure is a currency for success. It’s not a guarantee to success, but it gives you the ingredients, the know-how to actually avoid what caused you to fail the first time,” he said.

“Your success is determined by how many uncomfortable conversations you are willing to make,” he added, citing American author and entrepreneur Timothy Ferriss.

Pajo said the key to a successful startup lies in offering a better solution to an already existing problem.

“Look for someone who is already solving a problem. If your solution is better than an existing solution, then you are probably a startup,” he added.

GOAB returns to the world-famous island of Boracay, its inaugural venue in 2013, after it was held in Cebu last year.

“Geeks on a Beach is the first startup conference in Asia that focus on what a country has to offer, for example the beaches, the ecosystem that we have here. What we want to encourage to people is to check out the Philippines,” Pajo said.

“It’s a way of putting the country in the startup map by focusing on the map,” he added. Yuji Vincent Gonzales