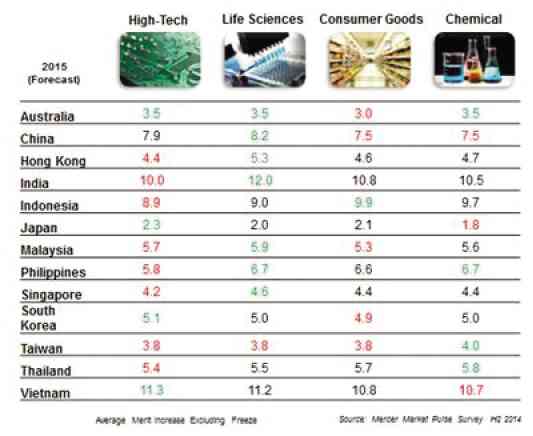 Salaries across Asia Pacific are expected to increase by an average of 7.3 percent in 2015, with wages in the Philippines expected to rise by 6.5 percent, a recent labor market study showed.

Salaries in India and Vietnam are expected to increase by double-digits this year (10.8 percent and 10.3 percent, respectively), the highest levels in the region, followed by Indonesia (9.4 percent), China (7.9 percent) and the Philippines (6.5 percent).

However, Mercer also points to “real wage growth” as an important indicator.

In the Philippines, for example, with the inflation forecast at 2.5 percent, real wage growth is at only 4 percent.

But on the whole, salary increases for 2015 are expected to be higher than inflation across Asia Pacific, resulting in real wage growth in the region, the Mercer study showed.

“It is important to keep growth     rates in perspective,” Puneet Swani, Partner, Information Solutions & Rewards Practice Leader-Asia, Middle East and Africa at Mercer, said in a statement. “While real wage growth is good news for emerging markets, on a percentage basis, absolute salary levels are still low in these countries, compared to more developed markets.”

The study also found that the technology industry has the lowest salary increase forecast for 2015 in eight out of 14 countries in the region, including the Philippines, where it was forecast at 5.8 percent.

Meanwhile, the study also showed that the life sciences industry had the highest salary increases forecast in seven out of 14 countries. In the Philippines, it was at 6.7 percent—same as the chemical industry, and just slightly higher than the consumer goods industry (6.6 percent). 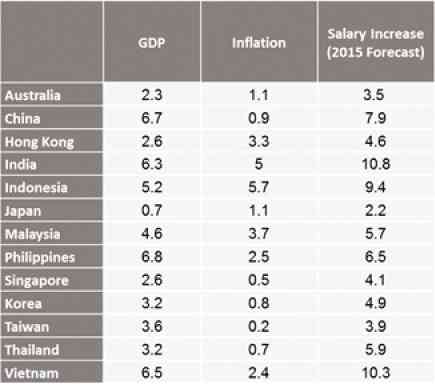 The study also revealed doubt-digit turnover rates in almost all Asia Pacific countries, except in Japan and South Korea.

“Despite the recent stabilization in voluntary turnover rates, the rising numbers represent a major challenge in terms of replacement costs in the form of higher salaries for new joiners, recruitment costs and lost production, all of which negatively impacts overall cost of operations and margins that are already under close scrutiny,” the Mercer study said.

“After a gap of three years, we are seeing changes in hiring intentions in Asia Pacific,” Swani said. “The consistent hiring which had continued unabated over the past three years has begun to slow down. Although four or five companies out of 10 are still looking to increase headcount, especially in emerging economies, this number has decreased from six to seven in the past few years. Sales and marketing, technical/engineering and finance and accounting functions continue to lead the pack in terms of where maximum hiring is happening,” he added.