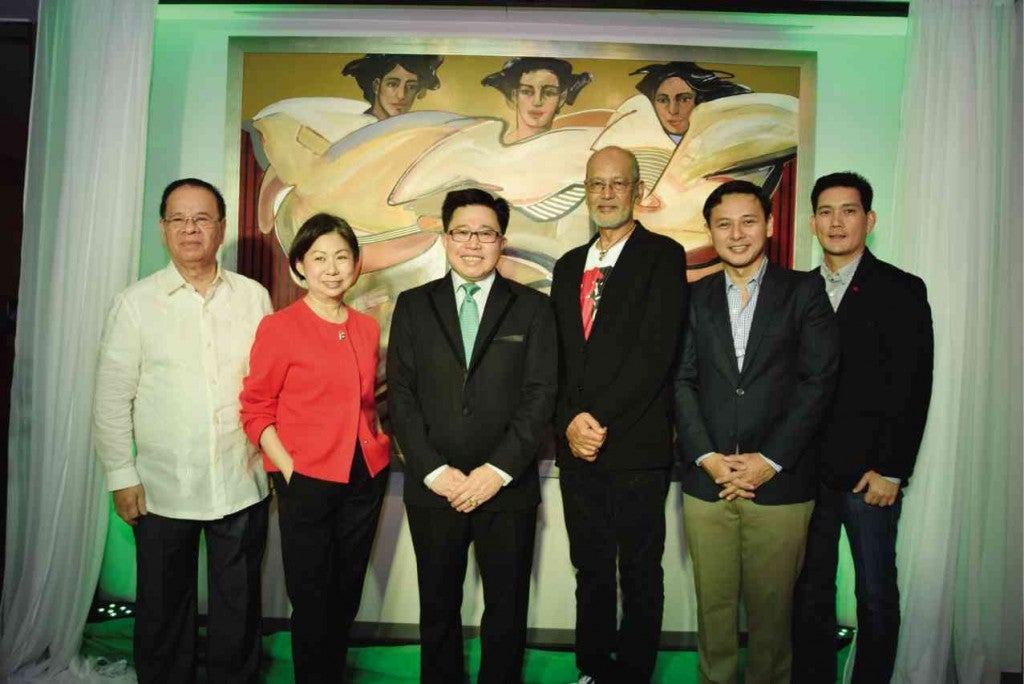 Viventis marks its 14th year with the opening of its new offices and unveiling of ‘Three Graces’, a life-size painting by National Artist Ben Cabrera.

That was how Malaysian Yu Ming Chin described his decision to set up Viventis Search Asia Inc. in the Philippines in 2001, a period when the global economy was still reeling from the effects of the dotcom crash and the Asian financial crisis.

It was a leap of faith for the founder and executive director of Viventis Search. The first three years, in particular, were the hardest for the company. He had to use his savings to plug the company’s huge losses.

“[The year] 2001 was a very hard year because of the dotcom crash, and the economy was still recovering. We almost died in a span of three years because we suffered huge losses. I had to reconsolidate and focus, focus, focus,” Chin recalled.

Chin already had an established career in IT management at that time.

“I’ve been here for 29 years. I first came here in 1987 right after the Edsa revolution. I started here on a very missionary role as I spent 12 years with the Center for Research and Communication (CRC) and helped it become the University of Asia and the Pacific (UA&P),” Chin related.

Chin established the bachelor and masters programs in Information Technology and contributed in building a world-class IT infrastructure for UA&P.

Prior to setting up Viventis, he was also the general manager of Asia Online, a pioneer e-commerce provider in the Philippines. He spearheaded the first large-scale outsourcing venture tapping into Filipino talents to build websites and e-commerce solutions for blue chip clients across the globe.

However, a strong passion for leadership and talent management continued to press Chin to doing something else than his career in IT management. This skill had become more apparent one time when he had to help a friend.

“In a rare occasion, I was asked by a friend to help [look for] three country managers. Without even doing basic research, I nominated three candidates and all of them were short-listed. Two of them were successfully placed. It’s like having a sixth sense in talent management. I have a way of reading people and seizing the opportunities. And in the business of executive search, it’s all about seizing opportunities for candidates,” Chin said.

Fast forward to today, Viventis Search was able to fill in 14,000 top management positions across all sectors from information technology to the health industries.

The company was also able to expand its presence to other countries including Singapore, Indonesia, and Malaysia.

Recently, Viventis Search invested P200 million to relocate to a new state-of-the-art office in Ortigas that would serve as its headquarters in the region.

Chin stressed that the Philippines remained an ideal site for executive search and other related services because of a strong talent pool.

“The Philippines is like the natural capital for human talent in the region and more so on a multicultural level because the influence of Europe through Spain is very strong, as well as of the United States. During historical times, there were also influences from the Chinese and Malay. There is also a slight influence of Indian culture,” Chin said on the sidelines of the company’s office inauguration recently.

“Through this global hub that we have established here, we intend to grow the other critical and affiliated business of recruitment, which is interim management. The employment trend today is more on the recruitment process outsourcing (RPO) as a lot of companies are now trying to keep a lean recruitment team and function,” Chin explained.

To further expand its reach, Viventis is eyeing to set up a satellite office in Cebu as well as separate offices in Davao and Baguio. The company is also seriously considering branching out to key gateway cities including Hong Kong, Shanghai in China, and Mumbai or Delhi in India.

“We need to strengthen our business. Right now, the market is being developed. There is high appreciation for the need of executive search, interim management, RPO, and assessment. We need to bring a higher level of market understanding and establish Viventis to be the number one player in the country in this area, and use that to grow our regional footprint in key gateway cities,” Chin said.

Over the next three to five years, Viventis may list at the Philippine Stock Exchange. However, Chin declined to cite details, noting only that he has been receiving calls from American and European firms wanting to invest in or buy out their equity in Viventis.