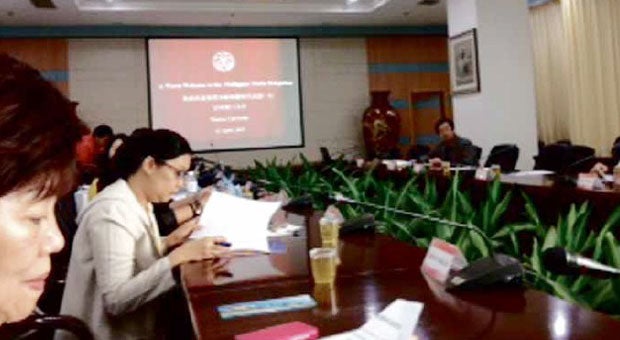 SILK ROAD INITIATIVE BRIEFING Professors at the Chinese Xiamen University give a briefing to Filipino journalists during their recent visit to China. PHOTOS BY CHRISTINE AVENDAÑO

QUANZHOU—The sea used to be near this city, the starting point of China’s ancient maritime Silk Road in the east.

Today, Quanzhou, where the 90-meter-high Jiuri Mountain is located, is being developed into the “pioneer” of China’s new maritime Silk Road, and Chinese officials make it clear that the Philippines is very much part of the new Chinese initiative that aims to boost trade, economic and cultural ties between the two countries and, it is hoped, strengthen political ties strained by the South China Sea dispute.

Jiuri Mountain, or “Hill Jiuri,” as stated in the marker standing at the foot of the mountain, was a witness to centuries of prayers of Chinese and foreign sailors and travelers for good winds and smooth sailing before they set sail for foreign lands.

Their prayers and wishes are forever etched in 75 inscriptions and engravings set around the hill.

During the Tang Dynasty, Quanzhou was the busiest port and venue for foreign trade, and during the succeeding Song and Yuan dynasties, the largest port in eastern China.

The inscriptions found on Jiuri Mountain say that Quanzhou was the starting point of the ancient trade route that linked the east with the west, which China is now reviving.

“Quanzhou at that time was like Shanghai and Hong Kong today,” according to Helen Chen, associate consultant of the Quanzhou Municipal Foreign Affairs and Overseas Chinese Affairs Office.

Chen said the modern Silk Road envisioned by China and other countries was intended “not only to promote trade but [also cultural and person-to-person exchanges] and even infrastructure [development].”

A Philippine delegation of journalists and academicians recently visited Fujian province to learn about the Silk Road project and understand how the Philippines could benefit from the Chinese initiative.

The Filipinos stayed for six-days, also visiting Xiamen, and learned from Chinese officials that China wants to strengthen economic and cultural ties with the Philippines through the Silk Road initiative.

The Chinese gave an assurance of cooperation despite the territorial dispute between China and the Philippines in the South China Sea.

Insisting it has “undisputed sovereignty” over almost the entire South China Sea, China seized seven Philippine-claimed reefs in the West Philippine Sea, part of the waterway within Manila’s 370-kilometer exclusive economic zone (EEZ) recognized under the United Nations Convention on the Law of the Sea.

Without military muscle to defend its territory, the Philippines took the dispute to the UN Permanent Court of Arbitration in The Hague for resolution.

China has refused to take part in the proceedings, insisting on bilateral negotiations to settle the dispute.

Chinese academicians see the Silk Road initiative as a way for the two countries to build confidence as they try to solve the dispute through diplomacy.

In a meeting with the Philippine delegation, professor Xu Ke of Xiamen University’s Research School of South East Asian Studies, called for confidence-building and cooperation between China and the Philippines, pointing out how the South China Sea dispute had strained ties by Manila’s move to take legal action against Beijing instead of negotiating with China.

Xu also said Manila was keen about promoting a code of conduct between China and the Association of Southeast Asian Nations (Asean).

Besides the Philippines, Asean members Malaysia, Vietnam and Brunei also have competing claims in the South China Sea.

China has for some time now been espousing bilateral talks to resolve the dispute, Xu said.

“So first we have to build confidence between the two countries. If we don’t (build) confidence to deal with the issue, so how can we do this and how can we cooperate under this scheme?” he said.

But Xu also said the Silk Road initiative may help China and Asean countries get on politically well.

“The problem is China and Asean have quite close economic cooperation. But in terms of the political, the gap is wider and (we can) use this scheme (Silk Road) to narrow this gap,” he said.

Chinese President Xi Jinping proposed the revival of the Silk Road in 2013 with the goal of building more economic cooperation among countries in Asia, Europe and Africa.

In separate trips in Central and Southeast Asia in 2013, Xi spoke about the development of the Silk Road Economic Belt and the 21st Century Maritime Silk Road, also called One Belt, One Road Initiative.

The 21st Century Maritime Silk Road is oriented toward Asean. 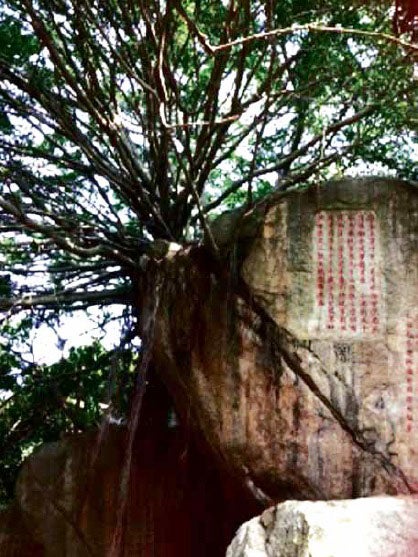 PRAYERS FOR TRAVELERS Prayers for a safe voyage for travelers and sailors are inscribed on stones at the Jiuri Mountain inQuanzhou City. This is said to be the starting point of the ancient Maritime Silk Road in China.

“In the 21st century, a new era marked by the theme of peace, development, cooperation and mutual benefit, it is all the more important for us to carry on the Silk Road Spirit in face of the weak recovery of the global economy, and complex international and regional situations,” China’s National Development and Reform Commission, Ministry of Foreign Affairs and Ministry of Commerce, said in a paper about the Silk Road.

“This initiative advocates tolerance among civilizations, respects the paths and modes of development chosen by different countries, and supports dialogues among different civilizations on the principles of seeking common ground while shelving differences and drawing on each other’s strengths, so that all countries can coexist in peace for common prosperity,” the paper said.

Jiang Xiding, a professor at Xiamen University’s Research School of Southeast Asian Studies, dispelled the notion that the Philippines is excluded from the Silk Road initiative because of the South China Sea dispute.

The Philippines was among 21 countries, including China, that signed on in October last year as founding members of the AIIB, which was seen as a rival to the World Bank.

“So I think this is a good beginning for cooperation,” Xing said. “When the Philippines needs capital for construction or infrastructure, the AIIB will provide (but) certainly there will be some procedure. So I don’t think the Philippines would lose from the One Belt, One Road (initiative).”

Jiang said China set up a Silk Road Fund of $40 billion. The AIIB, he said, has a capital of $100 billion, expected to increase from its members’ contributions.

At meetings with local officials in Xiamen and Quanzhou, the Philippine delegation received assurance that the Philippines would be included in their Silk Road action plans.