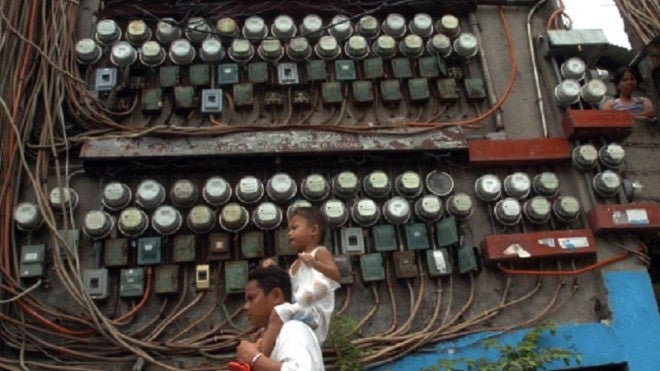 Manila Electric Co. (Meralco) said power rates for its residential customers this August would go down due to a lower generation charge, which takes up the bulk of overall rates.

At P9.12 per kilowatt-hour (kWh), the overall rate this month is lower by 26 centavos from the P9.38 per kWh in July, Meralco said in an advisory.

For a typical household consuming 200 kWh, the overall electricity bill will go down by P52.56 compared with that of last month.

Meralco, which distributes electricity in Metro Manila and nearby areas, said the main driver for the reduction in overall rates was the generation charge, which decreased by 19 centavos per kWh to P4.55 per kWh from last month.

“The generation charge reduction was largely driven by lower charges from power plants under the independent power producers (IPPs) due to lower fuel costs resulting from the quarterly repricing of natural gas and lower condensate cost due to fewer gas restrictions requiring these plants to use the higher priced condensate,” Meralco said.

Charges from the Wholesale Electricity Spot Market (WESM) also dropped due to lower demand caused by weather disturbances that affected parts of the July supply month.

IPPs and WESM registered reductions of 19 centavos per kWh and P4.20 per kWh, respectively.

Lower dispatch of plants under power supply agreements (PSAs), particularly Calaca and Ilijan, due to sustained outages and natural gas curtailment largely contributed to the 12-centavo-per-kWh increase in the average PSA cost.

The share of IPPs, PSAs, and WESM to Meralco’s total power requirements stood at 46 percent, 43 percent and 11 percent, respectively.

In addition to the generation charge, transmission charge also registered a reduction of 4 centavos per kWh due to a decrease in power delivery charge and ancillary charges.

Taxes likewise went down, by 4 centavos per kWh. Other charges, meanwhile, increased by 1 centavo per kWh.