THE PHILIPPINES is no stranger to international franchising, but what does it say when an international brand chooses the Philippines as its first site in Asia?

In her recent visit to the country, Buffalo Wild Wings global CEO Sally J. Smith was not only bullish on the popular sports bar chain’s entry to the Philippine market, but was also ready for growth with news of expansion.

“Being the first restaurant in Asia, Philippines will always have a special place in my heart,” Smith said.

She said the most important consideration in investing in the Philippines was finding the right business partner.

The Bistro Group is a local restaurant operator under William Stelton with a wide range of brands such as T.G.I.Fridays, Italiannis, Fish & Co., Krazy Garlik, Bulgogi Brothers, Village Tavern, Watami, Modern Shanghai, Tonkatsu by Terazawa and Siklab, before it took in Buffalo Wild Wings.

The sports bar and grill is set to open five more branches, six months after its pioneer branch was launched in Estancia Mall in Capitol Commons, Pasig.

It opened its second branch in Glorietta early last month.

Another one is set to open in BGC Uptown in November, while Mall of Asia and several other locations outside of Manila are being considered.

“They could easily have five branches open within two years which I think is phenomenal growth. That’s a pretty aggressive growth schedule,” Smith said.

“When you think about finding the location, doing the build out, getting all the permits—again that’s about having the right partner. They (The Bistro Group) know how to do it and they’re passionate about the brand,” she added.

It took about four years before the trans-Pacific deal materialized.

The Bistro Group approached Smith in 2011 at the chain’s head office in Ohio.

Smith saw the group’s operations in the country two years later, leading to the opening of its first branch in January this year.

“American concepts as well as concepts from other countries are very well accepted here. So we did a lot of research on the Philippines. We found that beer and sports would resonate,” Smith said. 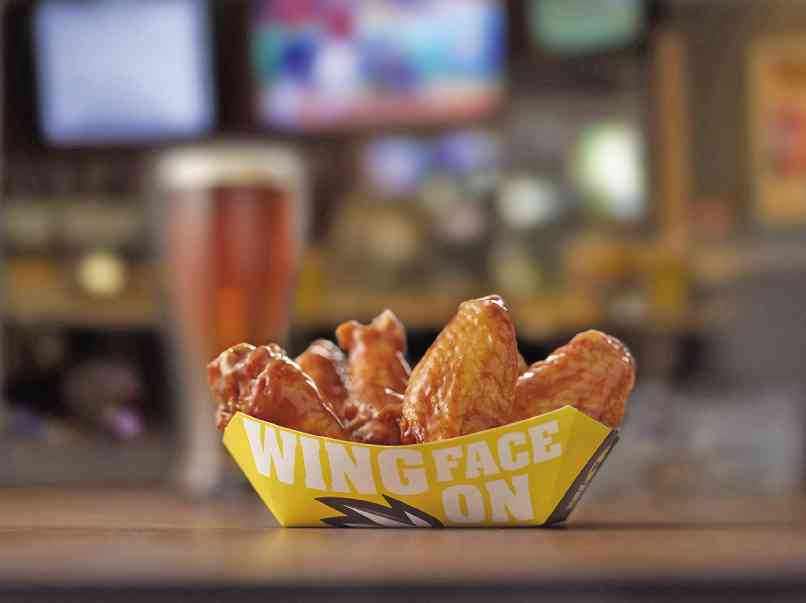 In the Philippines, Buffalo Wild Wings offers customers a choice among 16 sauces and five dry rubs.

But Philippines is just a part of the brand’s projected Asian reach. Smith said that in addition to the 1,100 branches in the United States, Buffalo Wild Wings’ goal is to open 400 more restaurants internationally in 10 years—the bulk of which will be seen in Asia.

She foresees that 300 of the 400 targets will be in this region.

Smith is now in talks with Hong Kong, India and Vietnam.

The company is also set to open a branch in Saudi Arabia in August.

Smith concedes that countries may differ in sports preferences, but she believes that there’s always a team—and cold beer—for everyone in her bar.

Local sporting events like Pacquiao fights, PBA games, the V-League competition and UAAP rounds have become staple reasons for family and friends to huddle while dining.

Even international tournaments like Fifa, Wimbledon and NBA Finals have garnered support from Filipino fans who would even watch telecasts during ungodly hours over drinks and food.

Smith, however, was quick to add that Buffalo Wild Wings was not just for sports buffs. 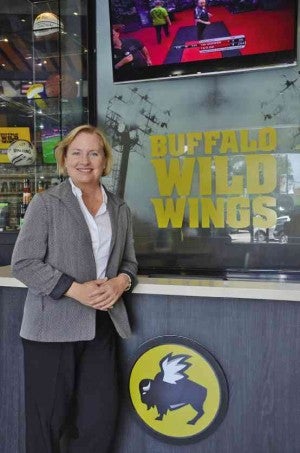 “At lunch or dinner time, we see a lot of families. Then it shifts. As the families go home, the young people come out,” Smith said. “And I think that’s what helps drive the sales. It’s that you appeal to a whole variety of customers.”

Smith also plans to authorize the Bistro Group to become a training hub for Asia since the restaurant operator has a training facility.

Smith attributes a major part of Buffalo Wild Wings’ success to research, especially since she’s “not the main target customer.”

She shared that operating a sports bar chain, which is traditionally a male-dominated industry, can be tough for a woman CEO.

“Interestingly, our chief financial officer is a woman as well, and one of the questions we usually get is ‘how can two women run a sports bar?’” Smith said.

The lady CEO has long set the stereotype aside and worked hard to rule the roost by giving customers what they want through research and a keen nose for trends.

She joined the company in late 1994, rose through the ranks and raised $8.5 million for the chain’s IPO.

Through her leadership, Buffalo Wild Wings went public in 2003 and now has about $100 million on its balance sheet.

As Philippines is set to open more stores in the coming months alongside branches in the Asian belt, Smith emphasizes how a global brand can have a universal appeal but local taste.

At the heart of Buffalo Wild Wings’ appeal are its flavors, which should appeal to every market. Smith said the company, however, was open to collaborations that would suit the local taste of the host country.

“We’re always looking at flavor trends around the world and try to capitalize on that,” she said.

BWW started with four sauces-mild, medium, wild and blazing-when it started 35 years ago.

In the Philippines, it offers 16 sauces and 5 dry rubs, while the US market enjoys 21 signature sauces.

“We’re looking at individual countries and their flavor profiles. The Bistro Group sent its chef over to the United States to work with our R&D team. And he’ll be talking about flavors in Manila,” Smith said.