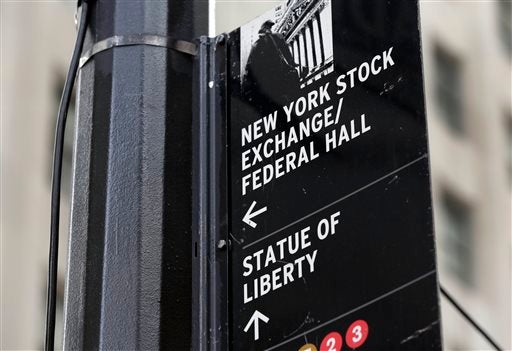 In this Oct. 2, 2014, file photo, a street sign directs people to The New York Stock Exchange, Federal Hall, and the Statue of Liberty, in New York’s Financial District. Chinese stocks fell further, Tuesday, July 28, 2015, after suffering their biggest drop in eight years the previous day while most other Asian markets declined and Europe rose. AP

HOME DELIVERY: UPS rose $4.37, or 4.5 percent, to $99.52. The company saw profits jump from a year ago, helped by stronger business overseas. UPS earned $1.23 billion, or $1.35 per share, for the three months ended June 30. A year earlier it earned $454 million, or 49 cents per share. UPS is sometimes seen a proxy for the global economy because of its huge role in delivering goods all over the world on a daily basis.

CHINA FALL: The Shanghai Composite Index closed down 1.7 percent after trading down as much as 4 percent earlier in the day. The index had plunged 8.5 percent on Monday, its biggest drop since February 2007, despite concerted efforts by the Chinese government to stem the market’s slide.

US ECONOMY: Traders were turning their attention to the U.S. Federal Reserve as they try to assess when interest rates will be raised. Fed policymakers meet this week, but few central bank watchers expect a rate hike. Many expect the Fed to begin its next cycle of rate increases in September or December. Ultra-low interest rates have been a boon for stock markets, and many questions remain about how markets will react to the first increase since the 2008 financial crisis.