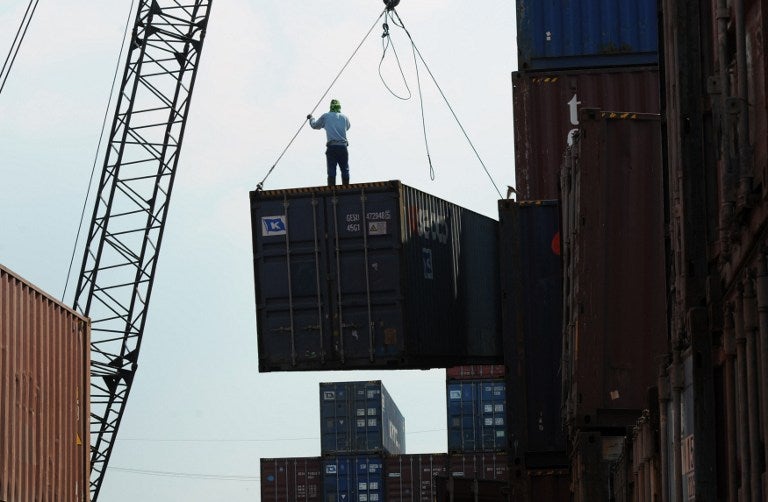 A worker stands on a container at a port in Manila on February 24, 2015.The Philippines on Monday, July 6, 2015, secured another credit-rating upgrade from Japan Credit Rating Agency Ltd. (JCR), which was also the highest that the country has received from major international debt watchers. AFP PHOTO/TED ALJIBE

ADDRESSING corruption and instituting good governance reforms were seen as the Aquino administration’s most crucial achievements during the past five years that could provide a “firmer foundation” for the next Cabinet, the local and foreign business community said last Friday.

However, President Aquino, who is delivering his last State of the Nation Address (Sona) today, was deemed to have fallen short in delivering results in key areas, the biggest letdown of which was the failure to ease the restrictions on foreign investors under the Constitution as well as in gaining a more significant headway in the public-private partnership program (PPP), touted as the centerpiece of the administration’s infrastructure program.

“The greatest achievement of the Aquino administration is without doubt its good governance reform agenda. It has rekindled people’s hope for a corruption-free government. Though there is still much more that has to be done, the seeds of a culture of integrity have been sown,” Peter V. Perfecto, executive director of the Makati Business Club (MBC), said in a text message Friday.

According to Perfecto, the Aquino administration’s efforts to institutionalize reforms were highly commendable and have been recognized globally as well. The economic reform agenda, he added, has also led to successive credit-rating upgrades and improvements in various global competitiveness rankings for the country. These gains will now allow the next administration to have much firmer foundations to build on.

“On failure, probably the biggest disappointment is that the administration let go of [former Customs Commissioner John Phillip P. Sevilla]. The business sector was generally happy with his handling of the Bureau of Customs, but political accommodation apparently became more important. That was an extremely unfortunate development for the ‘tuwid na daan.’ Also, the PPP program was a huge letdown as it was from day 1 touted to be the centerpiece of the infrastructure program. Daang Hari-South Luzon expressway project and the classroom building will probably be the only PPPs that will be completed by the time the Aquino administration steps down. Everyone believes they could have done much better,” Perfecto pointed out.

Henry J. Schumacher, vice president for external affairs at the European Chamber of Commerce of the Philippines Inc. (ECCP), agreed that gains were achieved with the implementation of good governance and anticorruption reforms, the passage of the Philippine competition law, the amendments to the cabotage law (relaxed rules on domestic shipping) and in addressing the need for peace in Mindanao.

On the negative side, however, Schumacher noted that the Aquino administration failed to implement the Data Privacy Act and to set up a Department of Information and Communications Technology (DICT).

“Infrastructure implementation [is] basically not happening [and there is] unwillingness to open the economy to more competition,” Schumacher added.

John D. Forbes, senior adviser at the American Chamber of Commerce of the Philippines (AmCham), said President Aquino was able to lay the foundations of “better governance and improved physical and social infrastructure which, if sustained for several presidencies, will see the Philippines become a much bigger and more inclusive economy.”

President Aquino, however, “neglected opportunities to develop agriculture and mining, where the country is underperforming,” Forbes added.

Management Association of the Philippines (MAP) president Francisco F. del Rosario Jr. also shared the view of other business groups in saying that the main successes of this administration were the implementation of corporate governance reforms and addressing corruption issues.

Other notable achievements, according to Del Rosario, included economic improvements as seen in the Philippines’ credit ratings, foreign direct investment inflow growth, controlled inflation, increased tourism arrivals, the roll out of PPP projects, the signing of the competition and cabotage laws, strong gross international reserves and strong and liquid banking system, among other indicators.