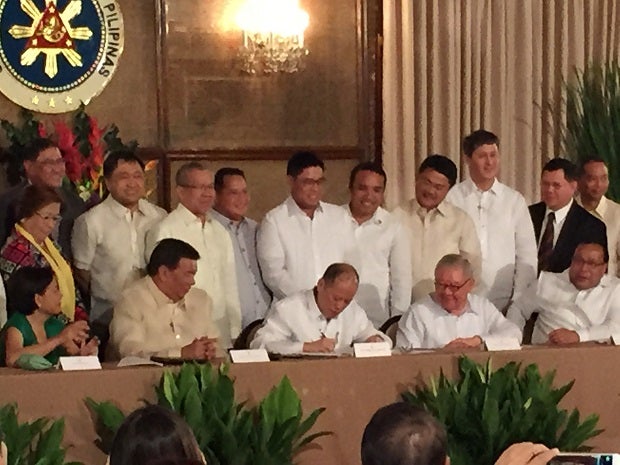 President Benigno Aquino III on Tuesday signed the Philippine Competition Act, a piece of legislation which establishes national competition policy in a bid to protect consumers and spur economic development, but previously stalled in Congress in the last two decades.

Around 250 government officials and businessmen attended the event.

The Philippine Competition Act, which has been described as “game-changing,” prohibits anti-competitive mergers and acquisitions, the fixing of prices during auctions or biddings, and agreements that limit or control production, markets and investments.

The law aims to level the playing field and improve efficiency in the economy.

(Now, at last, regardless if it is a small or big business, the competition involves releasing quality products at reasonable prices, instead of under the table practices or the use of connections.)

Belmonte said the new law would also encourage innovation and the production of more goods and services.

Another prohibited action, under the Competition Act, is the “abuse of dominant position” which refers to the selling of goods or services below cost to drive competitors out of the market or imposing barriers that prevent competitors from growing.

Penalties for violating the law may reach P100 million (first offense) or P250 million (second offense). Those engaged in anti-competitive agreements may also be imprisoned.

Aquino said that at the time when the country still didn’t have a competition law, “tsambahan ang naging pagtiyak ng patas na kalakaran sa merkado (it was only by chance that we could ensure that the market situation was fair).”

He said the amendment to the Cabotage law, on the other hand, will allow foreign ships to freely trade with their chosen port of destination. He said this will result in lower prices for both businessmen and consumers.

Aquino called it absurd that the Philippines, which is among the largest manufacturers of ships and the largest supplier of seafarers has among the highest prices of shipments.

Because the Philippines is an archipelago, the the transfer of goods from island to island is indeed difficult, he admitted. He said allowing the current system to go on would only benefit a few people.

Belmonte, at the same time, described the shipping industry as “nearly cartelized” and that the amendment would address high shipping costs. He said effective implementation of the law will result in its success.

(We believe that freedom is the pillar of a strong state; it spurs competition and the growth of the economy  and expands opportunities).

He said the two legislation pieces will result in positive changes that the next generations would benefit from.

Drilon also called it a milestone, saying that the Philippines “is now better equipped to face the challenges of the future.”