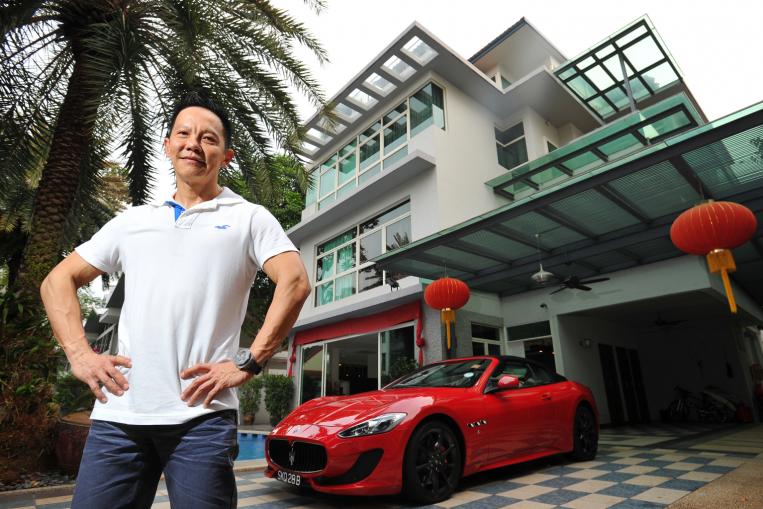 Growing up, Mr Patrick Lim never invited anyone to his home, an attap house in Siglap surrounded by bungalows and semi-detached houses. After starting his business in 1996, he bought a semi-detached house, whose garden boasts a bridge, a water wall and a pool.  LIM YAOHUI FOR THE SUNDAY TIMES

SINGAPORE — Mr. Patrick Lim admits freely that he had a big chip on his shoulder when he was growing up. His family was poor and home was an attap house (traditional dwelling) in Siglap. “Our house was one in a small cluster, the only cluster, of attap houses in Siglap. We were surrounded by bungalows and semi-detached houses,” he recalls.

During recess at Siglap Primary School, classmates would show him their lunches packed in nice Tupperware containers.

“They had exotic food I had never seen before,” recalls Lim, 50.

The nice ones would share their food with him and invite him home.

“But I also had a classmate whose father told him not to play with me because I was from a different class,” he recalls.

Poverty made him self-conscious and he never invited anyone home.

“There was nothing in the house. We didn’t even have a sofa, just a few wooden chairs,” he says.

“I told myself I would one day get my family a semi-detached house.”

He realized that dream nearly 20 years ago, shortly after setting up his own business in 1996.

Based in Shanghai, Star Controls started out distributing equipment, but over the last two decades, it has diversified and grown to become one of China’s leading manufacturers of valves, pumps and other equipment for the oil, gas, petrochemical and related industries.

The company, which has offices in Singapore and China, hires 235 people and has an annual turnover of US$80 million (S$109 million).

The living room of the Sennett Road semi-detached house Lim bought for his parents looks out into a garden which boasts a bridge, a water wall and an oval pool.

In the driveway are two cars – a red Maserati GranTurismo and a black Porsche Panamera . Trim and solidly built, the gym fanatic is friendly and candid. Success obviously has pruned the chip off his shoulders, and given him a deprecating sense of self-assurance.

A bachelor, he is the eldest of three sons. His father, a contract worker for a Japanese construction company, turned to home baking when his contract was not renewed. “He made kueh lapis (layered steam cake) at home to supply to stalls in the market. My mother had to look after the kids but sewed bags at home to make extra money,” Lim says.

Life was tough. From the age of 11, he started working during school holidays at his uncle’s plastic factory which made pencil boxes and files. “I would do the packing and also go out with drivers to help them load and unload when they made deliveries,” he recalls.

The job earned him more than $100 a month, enough to buy new books and uniforms for his two younger brothers.

“I never had new textbooks myself. Mine were hand-me-downs given to me by a neighbor who was one year my senior in school,” he says.

A self-starter, he did not give his folks cause for worry over his schoolwork. “I studied and worked hard because I always wanted to be among the top three students in class,” he says.

He did so well in the Primary School Leaving Examination that he could have got into Raffles Institution (RI), but he chose to go to Tanjong Katong Secondary Technical School instead.

“I heard how students at RI and St. Patrick’s School, which was near my house, got driven to school in big cars. I felt inferior, so I decided not to go there,” he says.

After his O levels, he went to Ngee Ann Polytechnic to get a diploma in mechanical engineering.

The idea was to start working as soon as possible to help support his family. Sitting the A levels and going to university were not options: his parents could not afford to pay the fees. To help pay for his polytechnic education, he gave tuition and worked as a waiter and bartender on weekends. “I worked in some sleazy bars in Golden Mile,” he says with a laugh. “It actually paid very well. With tips, I could sometimes get over $100 a night.”

The stint opened his eyes. “It made me realize life is not easy. Some of the hostesses had kids, and they took the job because they had to make a living. Many were nice people with terrible backgrounds. It was good for me. I learnt not to be judgmental about people.”

National service made him change his mind about a university education. “I guess as you mature, you are surer of what you want. It struck me that a degree would probably take me further in life.”

As luck would have it, his family had to vacate their house to make way for redevelopment. His father, who had a share of the land, came into $60,000 in compensation from the Government.

His mother urged his father to spend the sum on their eldest son’s university education. “It was an amount my dad had never seen before, so he was not prepared to give it up. But my mother insisted, saying, ‘Since he has the opportunity, why not let him have it?'”

That was how he got his degree in mechanical engineering from the University of Strathclyde in Glasgow, Scotland. After completing his final year, he flew to Hartford, Connecticut, in the United States to work as an asbestos remover.

The material once widely used in construction had begun to be banned by many countries from the 1980s because prolonged exposure to it could cause lung cancer and other fatal illnesses. But Lim and a few of his friends took the job because it paid US$40 an hour.

“We were put up in a house with two rooms. There were more than 20 people in the house, including Irish, Brits and Africans,” he recalls.

He managed to save more than US$8,000 after three months.

Upon his return to Singapore in 1991, he found a job with an American air-conditioning company.

“I thought it would be the fastest way to make money and I like meeting and talking to people,” he says.

He moved through a series of companies in quick succession, including a one-year stint at an Australian company dealing in pumps.

“It was run by a local who was really good with clients. I learnt a lot about closing deals and making clients happy from him. After that, I could talk to anybody. But it was really draining. I often crawled into bed at five every morning,” he says.

The training served him well when he landed a job with a global supplier of process automation products. He did so well he was tasked to be the technical manager in its Beijing office when the company expanded into China, and later to start up its Shanghai operations in 1994.

Barely two years later, he struck out on his own, pouring his life savings of $200,000 to set up Star Controls. “Starting my own business was a dream I’d harbored when I left for China. I was always on the lookout for opportunities.”

The early days were quite a ride.

He started with six employees, all sales people. “We did not know how to run a business. Nobody wanted to finance us because we were young and the company was new.

“I could not afford to hire people to do the finances for the first couple of years, so I had to do the accounting myself,” he recalls.

Youth and a huge appetite for hard work saw him through. It helped that he personally picked the people he hired.

“We were like a band of brothers. There were days when we worked until 4am before going for supper.”

He relied a lot on his instincts. “When I hire, I listen to my gut. Is the person trustworthy? Does he want to grow?”

For the first 15 years, he says, not a day passed when he did not think of the business or how to grow it.

And grow it did, by almost 30 per cent year on year for the first decade. His team grew to 80 in 10 years. It started acquiring distributorships for other equipment and went into manufacturing as well.

A great believer in training, he started Star Academy in 2009 which gives fresh graduates technical training as they learn about the company’s culture.

Nimbleness is a quality he prizes.

When a new industry such as polysilicon appears, he moves into third gear, fielding staff to study business opportunities. “When the market needs us, we are ready,” says Lim, who bagged the award for enterprise from Rotary-Asme (Association of Small and Medium Enterprises) in 2009.

Star Controls’ latest move is into the lifestyle market. He has just launched a line of water ionizers to create alkaline water. “I may go into health supplements next,” says Lim, who hits the gym every morning before going to work.

His hard climb to the top has made him mindful of the underprivileged. “After the Sichuan earthquake (in 2008), we took care of 14 youngsters who lost their parents and supported them until they finished their education,” says Lim, whose company makes sizeable donations to children’s charities and organizes dinners for old folk every year.

Knowing that he has provided for his family makes him happy.

One of his brothers works for him in Shanghai. The other runs his own business in Bangkok.

Marriage, he says, is not on his mind. “I guess in the first 15 years after I started my business, when I was at my most eligible, I was too busy working.

“That phase has passed.

He quit after he was promoted