Asia stocks mostly up on Greece 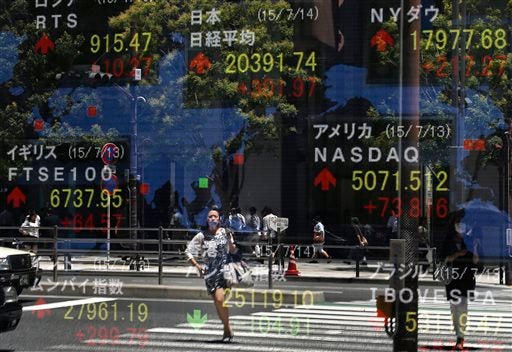 A woman is reflected on an electric board which shows Nikkei 225 stock index, center top, and other financial markets’ indexes in Tokyo on Tuesday, July 14, 2015. Asian stock markets were mostly higher Tuesday after Greece and its European creditors agreed on a bailout and Chinese shares rose for a fourth day following a massive government intervention. AP PHOTO/SHUJI KAJIYAMA

HONG KONG–Most Asian markets climbed Tuesday after Greece and its creditors agreed a debt deal to keep it in the eurozone, while the dollar advanced as attention shifted back to when the Federal Reserve will raise interest rates.

Both Shanghai and Hong Kong retreated after a three-day rally, although a little more confidence has returned since China moved to prevent a crash last week following a near month-long pummeling.

Shanghai shifted in and out of positive territory all day before ending down 1.16 percent, or 45.90 points, at 3,924.49–the losses following a 13 percent advance in the previous three days.

Global markets rallied Monday after Greece finally agreed to an austerity package to unlock billions of euros of much needed-cash and, crucially, keep it from plunging out of the eurozone. The announcement, after 17 hours of grueling talks at an emergency summit, ended a six-month crisis that had kept traders on edge.

With the crisis out of the way for now, investors turned their focus back to the Fed’s plans for raising interest rates, pushing the dollar up against the yen and the euro.

“As long as this deal holds, a potential roadblock to Fed policy normalization has been removed with the liftoff from later this year still on track,” Mark Smith, a senior economist in Auckland at ANZ Bank New Zealand, wrote in a client note, according to Bloomberg News.

With Fed chief Janet Yellen previously saying she expects a rise by the end of this year and a US recovery picking up, dealers are piling back into the dollar. The unit rose to 123.50 yen in Tokyo Tuesday from 123.45 yen in New York. The euro also eased to $1.0986 from $1.1004.

Markets will be watching a slew of US data this week for a better handle on what the Fed will do, including figures on industrial output, housing starts, inflation and consumer sentiment.

In China, hundreds of firms resumed trading Tuesday, adding to the more than 400 that returned Monday, after they were suspended over the past few weeks to prevent a market meltdown. At the height of the crisis half the market’s shares were put in a trading halt.

Authorities intervened after the Shanghai index plunged 30 percent in three weeks, wiping trillions of dollars from market capitalizations, spreading contagion in regional markets and raising fears over the potential impact to the real economy.

Market watchers are awaiting the release of growth data Wednesday to see if the world’s No. 2 economy has picked up after suffering a continuous slowdown for more than a year.

Oil prices slipped as Western powers and crude-rich Iran agreed a deal to curb Tehran’s nuclear program that is expected to see the lifting of sanctions on the country that have curtailed its key exports.