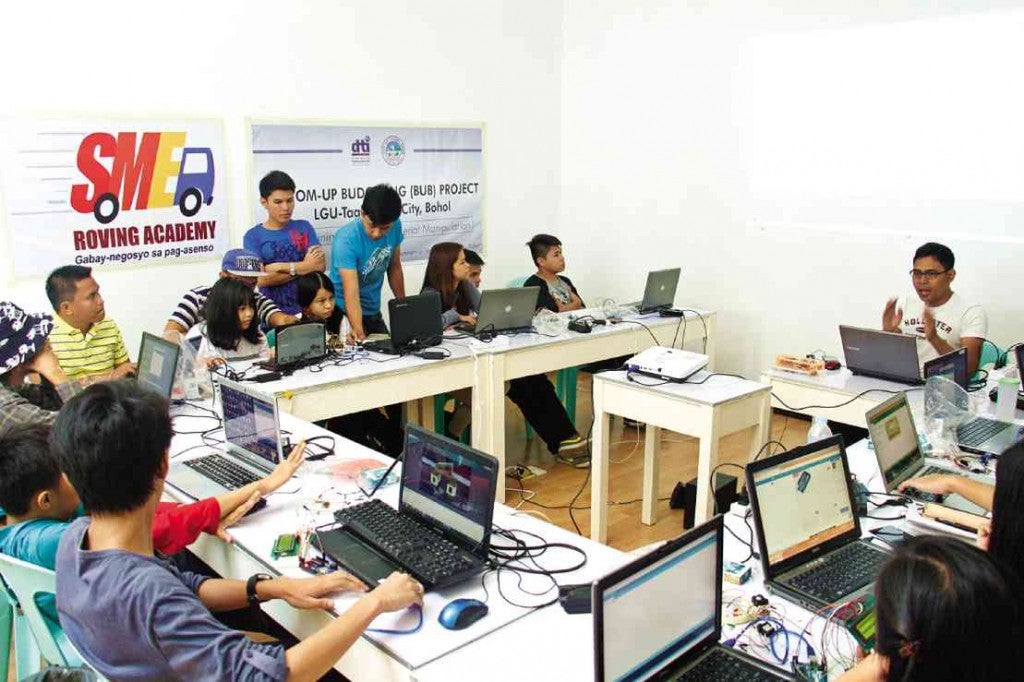 Imagine having such a lab where whiz kids can harness state-of-the-art technology to design and create their own products. The lab has high-tech digital fabrication equipment—3D printers, laser cutters, computer numerically controlled (CNC) mills—that can create almost anything.

Fortunately for those with a love for science, such a fabrication laboratory or “fab lab” is no longer science fiction these days. There are around 200 such fab labs in 50 countries, all linked together by one big global network.

Fab labs are equipped with an array of flexible computer controlled machines and tools that can make “almost anything” via individual, do-it-yourself (DIY) or do-it-with others (DIWO) collaborative, multisite team projects.

Simply put, they are 21st century machine shops, and key enablers in the revolution in digital fabrication. No wonder they are called “fabulous” laboratories.

Now imagine having one such fab lab right here in Metro Manila and placing this in the hands of the brightest high school scholars.

It will also be close to government agencies like the Department of Environment and Natural Resources and Department of Science and Technology, which can pick the brains of these young people to address national problems.

A group of PSHS alumni is now working to translate the vision into reality by setting up the PSHS Fabrication Laboratory or Pisay Fab Lab, envisioning this to become a cornerstone of the technology-entrepreneur (technopreneur) ecosystem in the Philippines.

This project is led by technopreneur Pablo Yambot (PSHS alumnus ’90), who aims to inaugurate the fab lab by September this year, in time for PSHS’ foundation week and alumni homecoming.

The group is now raising the seed capital of P7.5 million needed to build the fab lab, pooling contributions from fellow alumni as well as corporations that prioritize science and innovation in their corporate social responsibility (CSR) budgeting.

“It is a gift to PSHS and PSHS is very much interested. PSHS Class of 1990, volunteer alumni and the PSHS Foundation are working together to help the SHS Main campus,” Yambot says.

For its part, PSHS will set aside a 400-square-meter space inside its campus for the fab lab, which will be the first in Metro Manila.

It will be the second of its kind in the country, after the Bohol Fab Lab (Bohol Island State University in Tagbilaran) that opened in May 2014.

The people behind the Bohol Fab Lab have been helping the organizers of the Pisay Fab Lab choose the best equipment. They are also helping the Manila group determine the costs/pricing model and the schedule of the most relevant workshops.

Asked who will be given priority access to this facility, Yambot says: “Public access will prioritize high school students and micro/SMEs who have valuable academic/curricular value.”

“And our Fab Lab is the prototype. This will be the basis for PSHS Fab Labs all over the country,” Yambot says.

To scale up gains and impact, the plan is to first replicate the Fab Lab model at Pisay Quezon City across the PSHS system.

The country’s premier science high school has a nationwide footprint covering 13 campuses that will soon expand to 16.

Yambot tells the Inquirer that over the long term, the proponents envision this fab lab to become financially self-sufficient or at the very least, less dependent on the PSHS budget.

Asked what national problems/issues he hopes this fab lab will address, Yambot says these could include research on renewable energy/upcycling/ recycling; wearables/Internet of things and precision agriculture to make small farmers and food-producing small and medium enterprises (SMEs) more competitive by automating/creating intelligent systems with embedded sensors/low-cost intelligent systems.

Such a fab lab, Yambot says, could also work on potential solutions to make cities more intelligent with the help of an integrated systems of sensors. Or it could help ease traffic flow/congestion, make garbage collection more efficient or come up with inventions or innovations to fix broken pipes, roads and build better infrastructure.

The fab lab program was started in the Media Lab at Massachusetts Institute of Technology (MIT), a collaboration between the Grassroots Invention Group and the Centre for Bits and Atoms (CBA) at MIT.

It is an offshoot of a popular class at MIT called “How to make almost anything” (MAS.863).

Fab labs are now operating even in the rural areas of Ghana, India and Afghanistan. The global network of labs enables product invention and innovation by providing access to tools for digital fabrication.

The network provides operational, educational, technical, financial and logistical assistance beyond what is available within just one lab.

Fab labs are available as a community resource, offering open access for individuals and businesses as well as scheduled access for programs and services.

The PSHS community, alumni led by batch ’90, the PSHS Foundation, donor companies, envision the labs in the Philippines to help scholars gain much needed 21st century Science Technology Engineering and Math (STEM) education as well as practical experience and skills to shift them from being mere consumers to makers- people who can create and innovate new business models.

By working together with entrepreneurs and the Asian and Global Fab Lab networks, Pisay and other students using the lab are seen delivering valuable research projects.

In a recent World Economic Forum study, the Philippines came in 52nd out of 144 countries globally on the competitive index.

Japan and the United States are investing in fab labs for their high schools and universities to remain competitive in the 21st century global economy.

Proponents believe that it is in innovation, technology readiness, primary, higher education and training where the fab lab can help the Philippines become more competitive.

(For those interested to support or know more about Pisay Fab Lab, get in touch with PSHS Foundation or email [email protected])