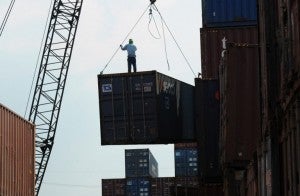 A worker stands on a container at a port in Manila on February 24, 2015.The Philippines on Monday, July 6, 2015, secured another credit-rating upgrade from Japan Credit Rating Agency Ltd. (JCR), which was also the highest that the country has received from major international debt watchers. AFP PHOTO/TED ALJIBE

The Philippines on Monday secured another credit-rating upgrade from Japan Credit Rating Agency Ltd. (JCR), which was also the highest that the country has received from major international debt watchers.

The Investor Relations Office (IRO) reported that JCR raised the country’s credit score to BBB+ from BBB, or just a notch below the minimum in the “A” category sovereign rating.

It was also the third positive rating action from JCR over the last five years.

JCR’s new credit rating for the Philippines was assigned a “stable” outlook, which meant that an adjustment would be unlikely during the short-term.

Credit ratings are a measure of a government’s creditworthiness. As the stability of state finances is also related to a country’s performance, credit scores serve as a proxy grade for the economy.

Improved ratings would also allow the government to demand lower rates when it borrows from lenders, which could translate to lower interest rates for consumers and businesses borrowing from banks using government-issued debt paper as benchmarks for their loans.

“JCR is of the view that the Philippine economy will, by and large, sustain an annual growth of around 6 percent in the years to come driven by strong domestic demand,” the Japanese debt watcher said in a report.

The Japanese rating agency likewise took note of the “general stability in the country’s political situation even as potential candidates for national positions gear up for the 2016 elections,” IRO said.

“JCR also noted the stable social situation amid inroads in poverty reduction, with the poverty rate falling from 28.6 percent in 2009 to 25.8 percent in the first half of 2014,” according to IRO.

“The latest ratings decision of JCR, which makes the Philippines very close to securing a rating within the ‘A’ category, appropriately reflects the strength exhibited by the economy. Inflation has remained low, external liquidity ample and banking system sound. All this has been achieved despite a challenging external environment,” BSP Governor Amando M. Tetangco said in a statement.

“The upgrade to BBB+ is a recognition partly of how the country’s fiscal sector has transformed since 2010. Fiscal reforms, both legislative and administrative, have resulted in more buoyant revenue collections, manageable deficits and lower debt service burden. The pace by which the debt burden has declined over the years is one solid proof of the rare kind of fiscal discipline that the Philippines exercises,” said Finance Secretary Cesar V. Purisima.

This latest credit-rating upgrade granted by JCR was the 22nd positive rating action overall for the country from top global debt watchers since 2010.